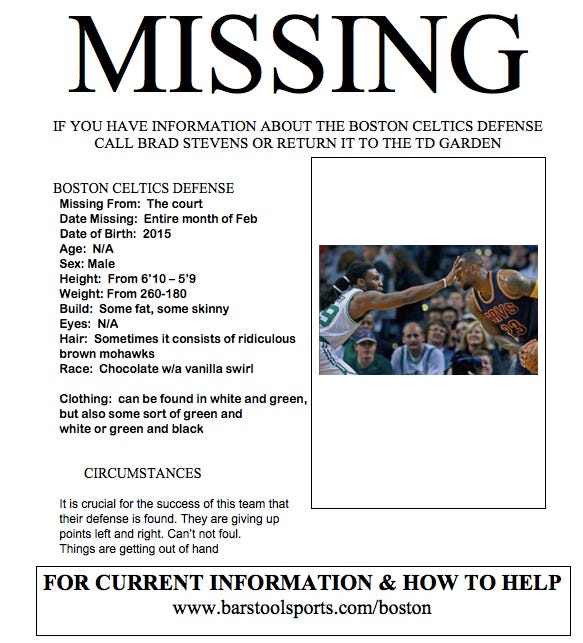 Well that certainly was a disappointing end to this little three game trip. Given how ridiculous the Celtics have been previously on the second night of back to backs on the road, it shouldn’t come as a surprise that they have started to regress back to the mean. Remember, teams in this situation win only around 35% of the time, and at their peak the Celts had won something like 11 straight in this scenario.

When they lost to Utah, my stance was that it was more how they played than who they lost to, but last night was a bit different. Even factoring Sunday’s game, this was truly a head scratching performance. Where has the defense gone? So much has been made about this team’s offensive struggles, and that they need that Superstar X in order to score the ball. Well how about this. I’d take the addition of a fucking role player if he played some damn defense. Offensively the Celtics are first in the East and 4th in the NBA in points per game. Read that again! First and fourth, for a team that “couldn’t score”. The problem is, as good as they’ve developed offensively, they are regressing defensively.

After their game in Denver, I was lead to believe things had been resolved. They were active, rotated on time, and actually you know, prevented the other team from scoring. In fact, since Avery’s game winner in Cleveland on Feb 5th, here’s how the next few weeks have gone for that stingy Celtics defense:

- 6 straight games giving up over 100 points including 4 in which they gave up over 120 points (all in regulation).

- They have surrendered a total of 166 FTA (27.6 average) and committed 135 fouls. Both WELL above their season averages

But here’s the thing. They were still in this game, twice! On some level it’s comforting to know that even when the Celtics play some of the worst defense of their season, they never go away. They are always in it. Don’t as me why, because if Brad doesn’t know, than I have no idea

Regarding Boston’s comeback bid, Brad Stevens says, “I don’t know how they do it, but it seems like we always have a chance.”

– Chalk this one up for the pro Jae Crowder group. As the Celtics best player last night, and really the only reason we were even in this game, Jae was fantastic. His overall highlights are nice

The C’s couldn’t pull off a W over MIN but Jae Crowder had a career-high 27 points & was the @HRBlock Clutch Player.https://t.co/ArpgHa9nfB

and his night ended up being a career best. I think we saw Jae’s value on full display: 9-15 (4-6 from deep) 27 points 9 reb 3 assists 2 steals 1 turnover. Sure it was nice that he was hitting shots, but it was the moments in which he was making these big plays that stood out. On a night that Isaiah was struggling to score the ball, Crowder stepped up and took it upon himself to claw the Celtics back into the game, twice.

Oh, and this full court bounce pass is NSFW

– Down 16 early. Take the lead. Down 10 with 3 minutes left in the game. Lose by 2 on a missed buzzer beater. If not for nothing, at least you know that you can’t ever turn off a Celtics game no matter what the score and time is. They just keep coming. Second night of a back to back, been on the road for a while, down so much early, could have lead to complete disinterest. Even once MN came back after the Celtics took the lead, the game pretty much over, there came the Celts for one more final push. Love the fight, and you should too.

– What it must feel like to be KAT’s agent.

– Sucks to waste another solid shooting performance. After that slow start in the first, the Celtics turned in 30, 31, 38 point quarters. A total of 33 assists on 49 baskets (67% assist%) shows me that the Celts didn’t play hero ball, kept it moving, but more importantly they made their open shots. Shooting 51% on unguarded shots was encouraging since we saw them struggle with that during this trip.

-I’m not sure why the Celtics decided to move away from Sullinger down the stretch. I was impressed early with how he attacked KAT and that he actually had some success. Sully was efficient, and overall pretty solid. At least on the offensive end.

– We touched on the defense issue earlier, so I won’t go on too much longer about it. The main culprit for that high total was their inability to defend KAT. Inside he killed whoever we threw at him, and he has the range to draw you out and then put the ball on the floor. He’s basically Anthony Davis 2.0 and may be better.

– Where KAT made his biggest impact is also where I think the reason is that the Celtics lost this game. MN’s 15 offensive rebounds for 26 second chance points and 51-38 rebounding advantage is the story of the night for me. KAT and Dieng had 5 OREB a piece, and if you can’t get stops you aren’t going to win.

– Speaking of Dieng, you could argue his made three at the end of the half was the difference in the game. Personally, it gave me a flashback to Andre Drummond hitting a half court shot against the Celtics and winning that game by 3.

– The 40 FTA and fouls every time down the floor has to stop. It just has to. I’m concerned because if you remember the Cleveland series last year, that was one of their biggest problems. In that series, they found themselves fouling more than they ever had all year against CLE, and that’s what sneaky scares me about this team. Yes they are in your face aggressive, Yes they cause a lot of turnovers. They also open themselves up to a whistle happy ref. I can just see whoever they play come April living at the FT line, especially if they are going to continue to foul like they are currently.

– I’ll say this, had he made the shot, everyone would be loving him. While it wasn’t the correct decision, I understand why Smart kept it and I am OK with it. Marcus is a dramatic player. He has shown he can make that game winning shot, and I love him for having the guts to take it. That’s what you want from your young building block, to not shy away from that moment,

But, here’s the problem. He was 0-3 from deep heading into that play. Aside from that, Isaiah was painfully open, I mean painfully 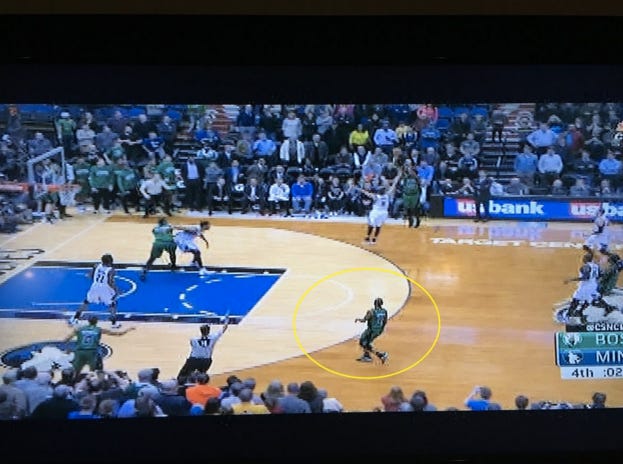 Now let’s pump the brakes that Isaiah 100% makes that shot. He had been 2-7 from deep himself, and struggled to shoot all game, but I agree, in this spot you want your best player taking the last shot.

Fortunately for the Celtics, they return home to play 7 of their next 8. With the Heat’s win the Celts are now percentage points behind them for the 3 seed, so that was nice while it lasted. Looking ahead there are a few chances coming for the Celtics to avenge some earlier losses, but they have no shot if they don’t get back to playing good defense. So far the post All Star Break Celtics have been a mixed bag, but let’s see how they play at home. Can’t be much worse than this.