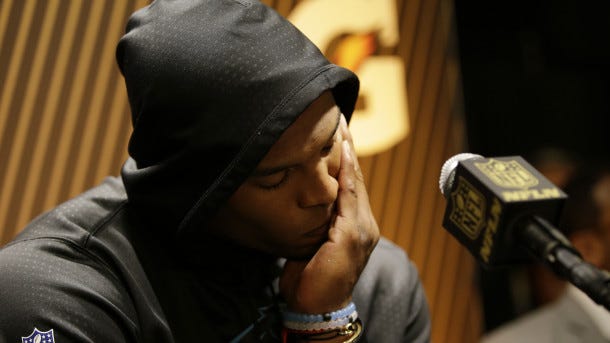 CBS – Spring training involves much more than bullpen sessions, batting practice, and meaningless exhibition games. There’s a lot of training that goes on behind the scenes, and not all of it is physical.

Every team conducts some kind of media training in camp because they want their players to know the right way to speak with reporters. They want them to talk to the media but not saying anything controversial, basically. It’s easier said than done.

The Yankees, who have to deal with the ruthless New York media, take media training very seriously in spring training. They often bring in guest speakers and show video of what they consider the right and wrong way to act around reporters.

During the Yankees’ media training, the Super Bowl is being used to portray the right and wrong way to act. Part of a video shown to pitchers and catchers compares how Cam Newton handled his Super Bowl loss to the way Russell Wilson dealt with his defeat the previous year.

Let’s file this under “obviously”. Do you want you team to act like the guy who stormed out of a press conference after he lost the Super Bowl, during a season he won the MVP and was the most cocky player in recent memory? Or do you want the humble guy only gets criticized in the media because he isn’t having sex with his smoking hot girlfriend? In an ideal world you find a guy who wins and is humble but not crazy enough to pass on finding out what Ciara feels like, while mixing in some personality. Essentially Steph Curry.

Teams do this training every year and of course they’re going to use the most recent examples of both good and bad because the media world changes so fast that the results of a positive or negative interaction with the media have changed. If you mess up with the media now, the reaction will be closer to Cam than is was to the last big screw up before it. This is only a big deal and being mentioned because Cam was so cocky all year and to a certain extent, society wants to see that fail.

What surprises me the most is that The Yankees even have to think about doing this at the Major League level during spring training. You would think that there is a larger session just on The Yankees rules and regulations that would make not walking out of a press conference a no brainer. If you can’t have facial hair, I would think it is just a given that you shouldn’t do anything that a nun would think is rude. Walking away from a conversation would fall in that category.