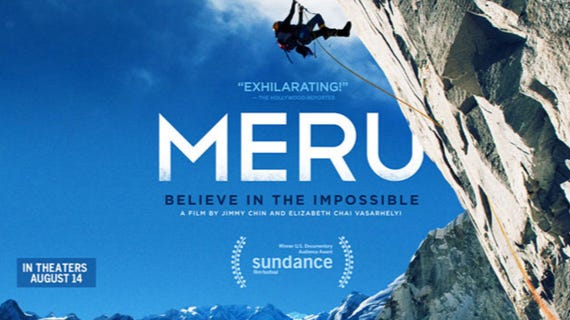 Meru is a documentary about 3 climbers attempting to climb a route up a mountain (called Meru) that has never been done before. I don’t want to give too much away, but the shit they deal with, the setbacks, and the insanity of what they are trying to accomplish keeps you on the edge of your seat the entire time. I watched it yesterday and haven’t stopped thinking about it. I started looking up climbing gyms in the area because I think I want to start climbing now. It was sort of like how after I saw Space Jam in theaters when I was 8 years old I went home and started practicing hardcore on my nerf hoop, thinking I could one day play in the NBA. Sort of like that but they actually let short doofy white kids rock climb.

But I digress, as I mentioned above, the documentary is about 3 climbers, Jimmy, Conrad, and Renan and their attempt to climb what some thought was an impossible route up Meru. I highly recommend it, thus it earning the prestigious Barstool Nate Documentary of the Year Award, given each year starting in 2016 to the documentary that I watch.

It’s on Showtime Anytime and On Demand, if you don’t like it I will give you a money back guarantee. Unless you actually pay for it. Then you’re out of luck. But I also guarantee it’s impossible for you to dislike, so it’s moot. Have a watch, it’ll be the best 89 minutes of your week.