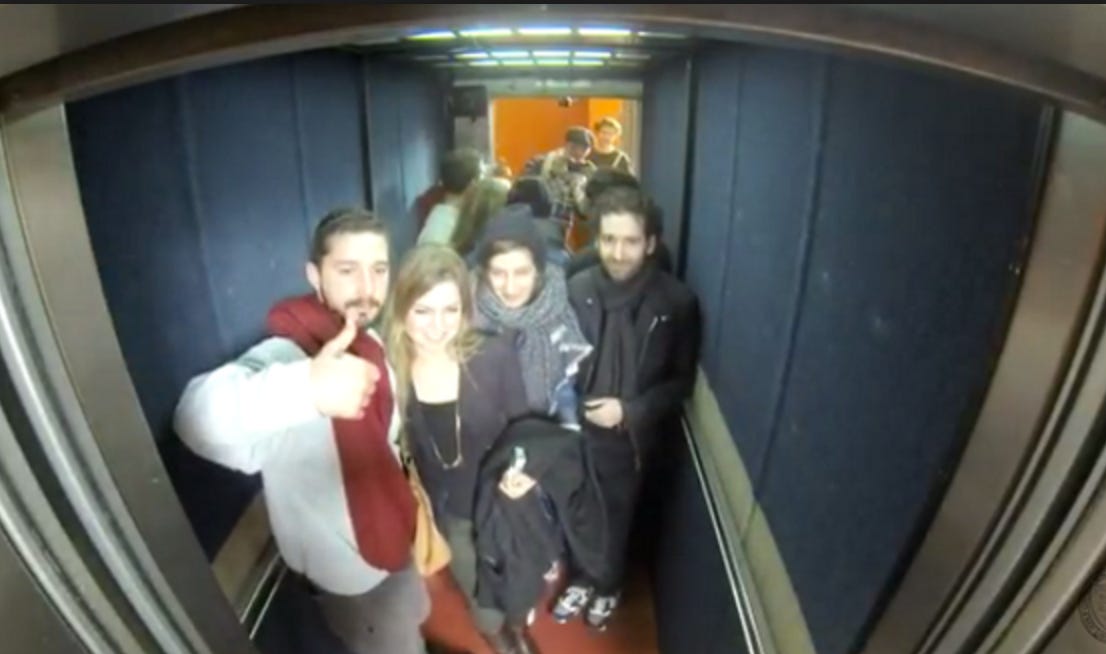 Fox News – Shia LaBeouf‘s elevator stint has taken a surprising turn. The eccentric actor, who on Friday spent 24 hours in an elevator at Oxford Union, punched a fan in the face in the middle of the social experiment — at the student’s request. The Oxford student, who waited in line for hours to get into the elevator with the 29-year-old actor, claimed to be a performance artist himself who wanted a punch from LaBeouf for a project of his own. “I’m a performance artist. Can you help me with completion of my next piece by punching me in the face?” the student asked. “Oh man, you want me to punch you in the face?” LaBeouf replied. “I don’t want to punch you very hard!” The student told LaBeouf not to be a “p—y,” but the actor continued to balk at the request. “I don’t like doing it though…I just met you.” The doors of the elevator soon close, though the punch is audible. LaBeouf’s 24-hour experiment concluded at 9 a.m. Saturday morning.

What a curveball here. Shia Labeouf doing the face punching. Upset city. If anything you’d think Shia would be the guy getting clocked. Either as a part of his “art” or just because he’s kind of a dick who deserves to get a fist in the mouth one day. But nope! A little twist to Shia Labeouf and his constant nonsense. He’s got other people begging him to punch them in the face. The irony is overwhelming.

At this point Shia Labeouf is like David Blaine but without any of the extreme shit. Like David Blaine lived inside a block of ice for like 72 hours straight. He stayed underwater for 15 minutes straight. One time he just stood on top of a pedestal in Times Square for a week. Just stood there like 30 feet in the air for a week. All of this extreme push-your-body-to-the-limits shit that people are actually kind of intrigued to see. Shia Labeouf has been doing that except none of it is hard. Just sitting in a movie theater. Standing in an elevator. I’m waiting for his next thing to be a livestream of him napping in bed for a few days. But I cant knock it. Its like the lazy Mailtime version of all that dumb extreme magician shit. And this latest story just solidifies it – Shia Labeouf is making headlines for punching other people in the face. I love it, man. He doesnt really act anymore. Doesnt really do anything remotely worthwhile anymore. Just picks weird shit and punches people in the face and I guess thats his career. Good for Shia. Like the Kardashians. Living the American dream.