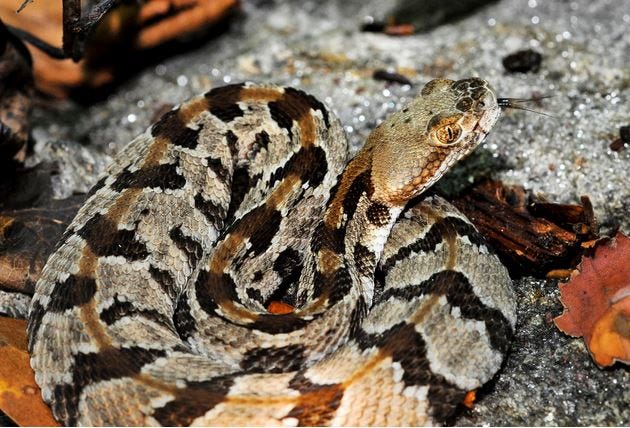 BOSTON — A plan by the state to establish a colony of venomous timber rattlesnakes on an off-limits island in Massachusetts’ largest body of water has some residents rattled. But the state Division of Fisheries and Wildlife official leading the Quabbin Reservoir project says the opposition is driven by an irrational fear of snakes and an unfounded concern that public access to the reservoir will be shut off. Tom French says the snakes introduced to Mount Zion Island will have no reason to leave because the island is big enough. They will also have adequate places to hibernate and abundant food sources. He says even if they did get off the island, they wouldn’t attack people.

Oh ok. Yeah this seems like a cool idea. Let’s just create a colony of deadly rattlesnakes in Massachusetts. Maybe we can import some trianchelas, electric eels and killer bees too. Just create like a zoo of the worlds scariest, ugliest and most likely to murder your face species. What could possibly go wrong? I mean the scientist guy said even if these rattlesnakes escape they won’t attack people because they’ll be content with their living quarters or something. Like just fat and happy rattlesnakes that don’t rattle their little asses of and bite you to death.

Editor’s Note: I’m being sarcastic. Mark my words. If we start building rattlesnake communities, I guarantee within 30 years all of Massachusetts will be over run with deadly snakes. Anybody who has ever seen a horror movie knows I’m right. I’m talking nobody will be safe. Not even my Nantucket house. Don’t ask me how the snakes will get to the Island but they will. I won’t have that. I can’t have that. If these scientists wants to create wildlife communities let’s start with cute seals or puppies or something. Pass on the rattlesnakes.