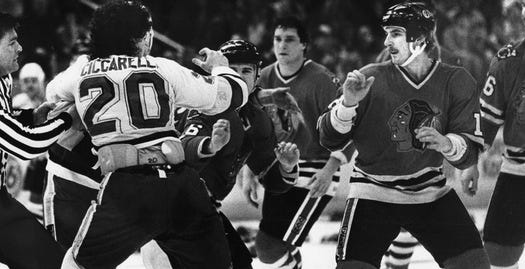 This is probably unknown to new hockey fans, or maybe even fans outside of the Minnesota and Chicago markets, but from the early 80s to the early 90s, the Blackhawks-North Stars rivalry was the nastiest and most violent in the game. Repeated bench clearing brawls, dirty plays, and overt, outward hatred. It was great. It was everything a hockey rivalry is supposed to be. Good ole Norris Division blood thirst. At 4pm today, The Blackhawks and North Stars will play for the first time since Minnesota’s first franchise left for Dallas in 1993.

You can go down a youtube rabbit hole forever searching Blackhawks-North Stars fights. One of the truly great blood feuds in NHL history. Obviously there won’t be any fists flying in the alumni game, but it will be so fun to watch Chelios, Modano, Savard, Roenick, and the other great names from this rivalry.

PS: It’s COMPLETE bullshit that Minnesota wasn’t able to retain the rights to the name “North Stars” when the franchise moved to Dallas. It should’ve been handled the way the NFL handled the Cleveland Browns moving to Baltimore. The franchise has to change the name and all the uniforms, records, and history stays with the original location. The NHL knew they’d return a franchise to Minnesota eventually. They should’ve been able to keep the jerseys and the name “North Stars”. If I were Commissioner I would make Dallas change right now,  the Wild would become the North Stars again at the snap of my fingers. I also don’t see why you can’t have North Stars and Stars in the same league. Nobody gets the White Sox and Red Sox confused. Do it NHL, bring back the Minnesota North Stars 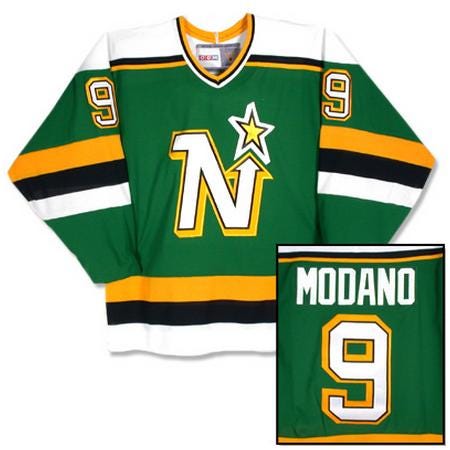