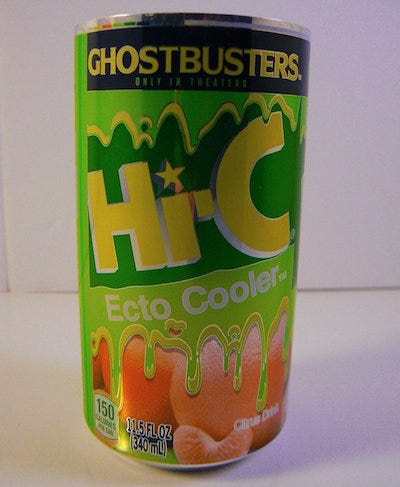 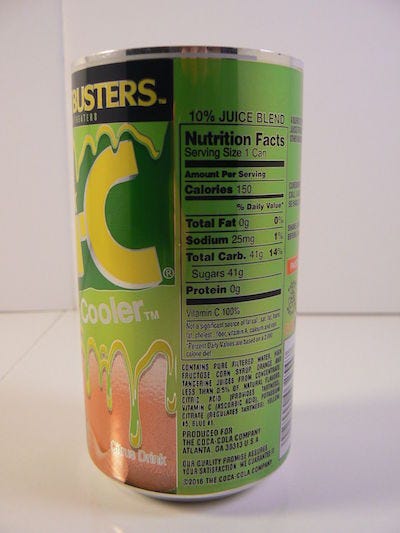 Some people are skeptical of the reboot, which cast the Ghostbusters as women, and we’ll find out whether the film is any good once it’s released. What’s really important here to people of a certain age is that the movie means Ecto Cooler is coming back.  An online frenzy began when fans learned that Coca-Cola had applied to renew the beverage’s trademark back in September. Like Surge, the product had built a strong following of young adults lobbying for its return.  A can popped up on eBay this week and then the auction quietly ended, probably because the product isn’t supposed to be available for sale yet.

It’s really happening!  When I blogged about Ecto Cooler potentially coming back, I admit that in my heart, I was a little skeptical that everything would work out fine.  But here we are.  Pictures of cans with the logo is the closest thing to seeing this magical elixir on the grocery store shelf.

Now do I have a few gripes?  Of course I do.  First of all, it just feels wrong to have Hi-C or Ecto Cooler in a can, unless said can is one of those jumbo cans that you need a can opener for.  Second of all, I need Slimer on that label.  He somehow became a recurring character on the cartoon and was like a C-List celebrity in the 80s from like two total minutes on the silver screen.  Slimer moves units and puts butts in the seats.  That simple.

But I guess this is the give and take with bringing back classics.  If you want to bring back Ecto Cooler, things are going to change.  If you want another Ghostbuster movie, it won’t have the Ghostbusters we grew up with.  And I won’t trash having the Ghostbusters as girls without seeing the movie.  Bridesmaids was great and the only Ghostbuster actress I don’t like is Leslie Jones.  I don’t think she’s ever made me laugh on SNL.  But again, at least some nostalgia is back with a chance to be great again.  And if you don’t buy Ecto Cooler in juice box form, you are a dope.

And shoutout to the person that created the Twitter handle for Resurrect EctoCooler.  You the real MVP.  And a silver medal to whoever found one of these cans and tried to sell it on eBay like it was the black market.  If you ain’t hustling, you ain’t trying.  And I guess a bronze medal for me for blogging this from Latvia.