Let’s watch it again on loop:

Kuzy is a magician. I don’t know how he knew Ovi was there. Nobody else knew. What’s a goaltender to do there? If he cheats over towards Ovi, Kuz just wraps it around. If he sticks to the post, Ovi has a layup, as seen above. That’s what makes Kuznetsov so dangerous. The Islanders saw first hand last night what he’s capable of, as he circled with the puck probably 5 different times, setting up scoring chances that shouldn’t even have existed.

So Kill The Islanders Day went swimmingly, as is tradition. Ovi scored twice to push his goal total to a cool 37 on the year (second is Patty Kane with 34 with in 6 additional games). The Islanders did take it into OT when Frans Nielsen scored with about 2 minutes left, but Justin Williams won it for the Caps in OT. The Caps have now won all 3 matchups vs the Isles this year, despite the best efforts of whiney Islanders fans.

Let’s talk about them real quick. I have never, everrrrr seen a whinier fan base when it comes to hitting in hockey. Every single time Tom Wilson lays a hit or finishes a check I get complaints in my Twitter mentions. It’s like clockwork. People legitimately upset that Tom Wilson plays physical. The best is “why does he keep hitting people smaller than him, what a pussy!” Uhhhh he’s 6’4 without skates on and this is the National Hockey League. I had people legitimately telling me he should pay attention to the size of the person he’s hitting. Banana Land. It’s actually amazing these big, bad Islanders fans are so quick to whine about clean hits, but then celebrate the time they cross checked Orlov from behind head first into the boards. (I’ll be fair and say this isn’t all Isles fans, mostly just guys who don’t use their own name or face on Twitter).

So yeah, just another great day in Barclays. Between the fantastic ice

and the fan in the front row eating spaghetti 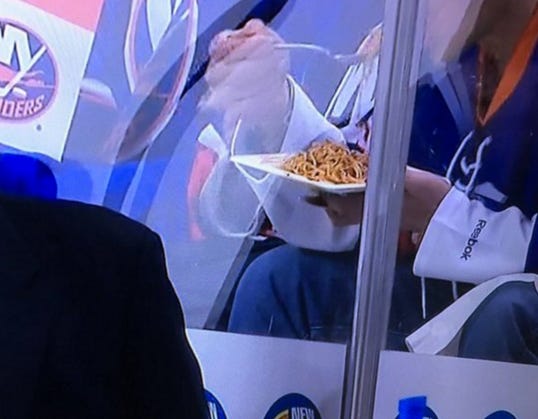 Seems like hockey has never been hotter in Brooklyn! 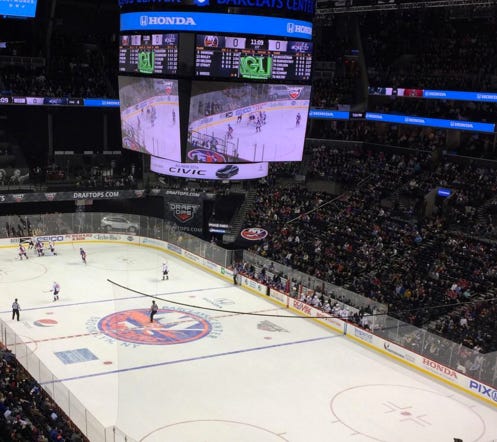