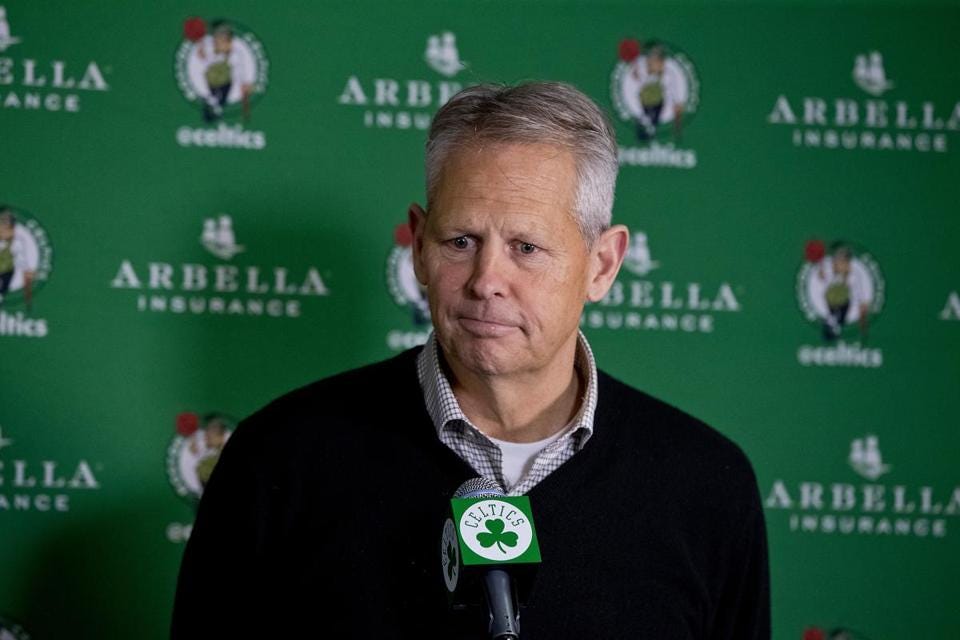 After a few hours to digest everything that happened, or rather didn’t happen, how should you feel as a Celtics fan? Where you stand on the issue of the Boston Celtics and the Brooklyn Nets 2016 pick will probably impact how you view this day. For starters, we’ll never know how close something was, or what a true offer for a player was, so it’s really a discussion of basketball philosophy.

Over the last four days, I’ve seen a few types of Celts fans. There are those who think you can get someone like Blake Griffin or Kevin Love and not part with that Brooklyn pick. There are those who are adamant that the Celts should keep the pick, because it could be Ben Simmons, and we are ready to declare him (at 18) the next Lebron. There are also those that are willing to move the pick in favor of already established NBA talent.

I understand the reason for wanting to keep the pick. Those who share this thinking will point to OKC/GS/SA as an example of what can happen if you hit on the right guys in the draft. They’ll tell you how no NBA team has won a title without drafting that superstar in the last like 100 years. They seem to ignore the PHIs/ORL/TOR/ATL/IND of the world who weren’t as successful with this method. Call me crazy, and I get that potential is intoxicating, but the Thunder/Dubs/Spurs seem like the exception to the rule, and not the rule. And personally, I’m not as comfortable as others relying on the fucking lottery. I’ve seen that movie before.

Also I propose this question for those who are “pro-draft”. Are big name FA’s lining up to go play in MN? Couldn’t you argue they have the best young core in the NBA at the moment? Is MN that different from Boston? Just because you stock your team with lottery picks who are the real deal, STILL doesn’t guarantee you that big piece.

Here’s the thing, at this point in time, there’s no right answer. Every option comes with some level of risk. Are the Celtics in a prime position if that pick busts? Will the player they get actually BE that superstar? But if you move it for a rental, what if that player leaves etc. Here’s Boston’s problem in my opinion. They are trying to operate with little leverage. Every GM knows they can’t keep all those picks, and every GM knows that nobody knows where that pick will end up. I honestly think Ainge offered it around, but didn’t like his return.

So by keeping the band together (pending Lee’s buyout), and picks intact Ainge and Co are taking a huge risk that this pick comes out top 2. If it’s even as high 4 or 5, I can’t see that being enough of a centerpiece for that big FA X they still need.

Something tells me that if Ainge had a hard time moving the picks when they are at their highest value, it’s going to be even tougher once things are known, and we enter the draft. Again, everyone knows they can’t keep all of their picks, so I have absolutely zero problem with overpaying for talent in a sign and trade.

Now that the dust has settled, where does that leave things?

1. Deep down I sneaky love how this roster stayed the same. Huge opportunity for us that have been preaching development and how legit these players are right now, to step up and prove us right. Can they do it? I dunno so far so good.

2. With Olynyk out and Mickey in Utah, maybe this gives the Celts an idea of what they have in him which may impact how willing they are to part with Olynyk/Sullinger/Johnson in the future.

3. Just because there wasn’t a deal, doesn’t mean this team is dead, or that things can’t happen. I think truly expecting a superstar player that would be coming from a contending team midway through the year is about as outrageous of a stance as you can have, I don’t care what the offer is. Sure it puts more pressure come summer, but literally nothing changes for this team at the moment.

4. If this team as constructed only ends up winning 1 round, it’s still a successful season. I’ve read a lot the last couple of days of this rush to get a title, and I think people are being too narrow minded. Look at this rebuild from the bigger picture. If you were told when the Big 3 trade first happened, that this is where you would be after this short of time, you would take that every day of the week.

So did Ainge do the right thing. Without truly knowing all the information it’s hard to say. I’m certainly not mad that the Celtics stood silent this deadline, I dunno if Big Cat has this trademarked, but I’m sort of “middle man Dan” about the whole thing. I’d be OK if they moved the pick/players, I’m OK that they kept them, and I’m still every bit as optimistic about this team now than I was before this whole ordeal.