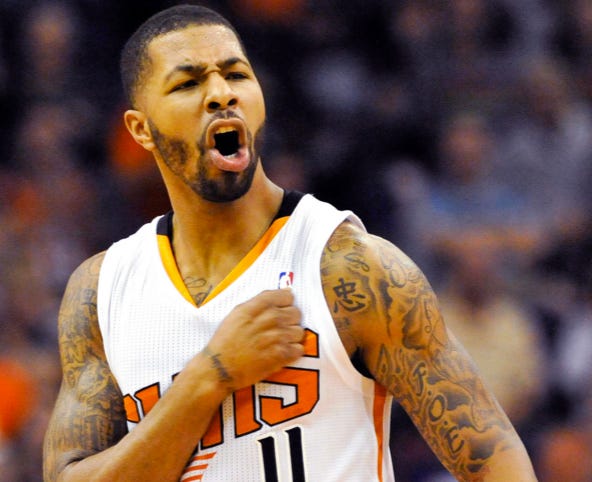 Yahoo - The Phoenix Suns have traded disgruntled forward Markieff Morris to the Washington Wizards, league sources told The Vertical.The Wizards are sending DeJuan Blair, Kris Humphries and a protected future first-round pick to the Suns, league sources said. Morris, 26, had been hounding the organization for a trade since July, after his twin brother, Marcus, was moved to the Detroit Pistons via trade. For months, inquiring teams were told the Suns wouldn’t be trading Markieff Morris, but the organization began exploring deals as it struggled with his attitude and in getting him to perform at his previous levels. Morris, 26, is averaging 11.6 points and 5.2 rebounds in a season that has included a towel-throwing incident with former Suns head coach Jeff Hornacek and a sideline altercation with teammate Archie Goodwin.

Markieff Morris 2016! Such a classic Ernie trade I can’t stand it. Just gunning for that 8th seed in the East and hemorrhaging the future to get there. Pretty bad if you ask me. But at the same time, Ernie can’t draft worth a shit anyway. In 10 years he’s drafted and developed John Wall and Bradley Beal. Every other pick has been a disaster. Actually I take that back. Jordan Clarkson was a great 2nd round pick…so they immediately traded him to the Lakers for cash. Ernie is absolutely clueless when it comes to scouting and player development that he said fuck it, let’s just trade our 1st rounder for an 11 and 5 guy with a bad attitude. And spare me the “it’s protected” nonsense. It is still potentially a lottery pick and it’s still a first round pick that with proper scouting could turn into a piece. But instead they just send it away. So very Wizards.

Every so often I’m asked why I don’t blog much about the Wizards. Well for 1, the Boston site didn’t have a Celtics blogger til this year so something is better than nothing. But for 2, it’s because they are legitimately the most frustrating, hard to watch, hard to write about team I can think of. Here at Barstool we aren’t doing game stories or breaking down x’s and o’s. We blog the fun stuff, the entertaining stuff. And nothing about the Wizards are either of those two, especially now that they are losing. And they aren’t even losing in a fun way. They play boring basketball. The Wizards have John Wall, one of the best and most exciting players in the league and haven’t given him shit to work with. They don’t build through the draft so they end up giving minutes to Drew Gooden and Kris Humphries and guys on 10 day contracts. It’s pathetic. There’s no depth, no youth, no nothing. John Wall vs The World because Bradley Beal can only stay healthy for 8 days at a time.

This is a team with the worst GM in the league and a bottom 5 coach. I have no idea why Ted has let it go on this long. How many years in a row can he allow Ernie to run this team into the ground? I’m not putting any eggs in the KD2DC basket anymore. Not unless drastic changes are made. They have to be made, right? Are we really just going to waste John Wall’s career? God I hope not. We need a new GM, a new coach (let KD pick the damn coach) and a new name. Wizards is stupid.