Pokernews - Late on Tuesday night, Bill Perkins tweeted that he had just bet Dan Bilzerian that Bilzerian couldn’t bike from his house in California to past the “Welcome to Fabulous Las Vegas, Nevada” sign in under 48 hours. Perkins confirmed to PokerNews that each man will put up $600,000 at even money.According to Perkins’ tweet, Bilzerian has up until May 31, 2016, to start the trek. Bilzerian responded with a tweet of his own, saying that the distance was 278 miles and that he hasn’t been on a bike in 18 years.

Oh to be a billionaire and bored, how I covet thee. The last we heard from Bill Perkins he bet Antonio Esfandiari 50k that he couldn’t lunge everywhere for 3 days. Antonio got so sore he ended up pissing at the poker table, got DQ’d from the tournament, and then was guilted into donating the 50k to charity.

Well now Perkins is back, and this time he bet his bud Dan Bilzerian (you may have heard of him) $600,000 that he couldn’t bike from LA to Vegas in 48 hours. I do not like Perkins’ side of this bet at all. Bilzerian was a day away from graduating the most intense Navy Seal program before he went crazy at the drill instructor. On the flip side, Bilzerian has been doing large amounts of drugs for the last decade or so and has had multiple heart attacks, so that’s working against him. He does keep himself in good shape and is mentally strong, so if I had to pick a side, I like his. I’m not going to do all the math, but while I thought it was a no-brainer that he could do it at first, the non-sleeping aspect will probably factor in more than we think, as well as straight up muscle fatigue from not riding a bike for 18 years. Also, Perkins said the ride is 320 miles, not 278 as Dan stated.

I think the bet will be close, but even if Perkins loses, it won’t be the worst use of over a half of a million dollars he’s ever done: 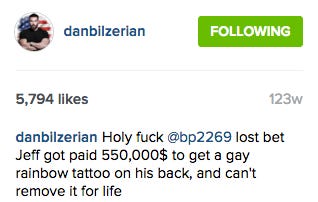