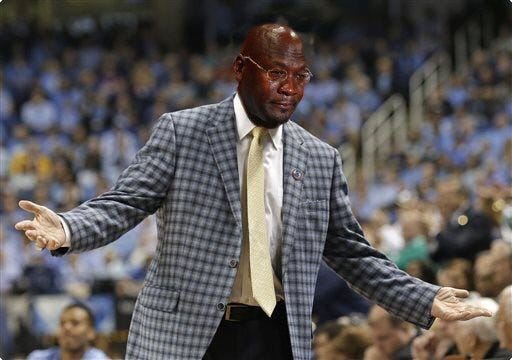 Kmarko talked a little bit about the Duke/Carolina game earlier today. But, there’s still more to talk about – especially from the Carolina side.

All year, I’ve been preaching about how Roy Williams simply isn’t a good coach anymore and that showed last night. Williams absolutely butchered the last 10 minutes of the game from a coaching standpoint and solidified himself as a complete clown on the sideline and press conference. I made sure to listen to the postgame conference just to see what Ol’ Roy said and daggum he of course didn’t take one ounce of blame.

He turned it on his players, saying they made some bad decisions and Duke’s defense picked up, not even alluding to the fact he completely fucked up. Let’s just look at the last possession of the game. I’m completely fine with him not calling a timeout to start the possession. The moment Justin Jackson couldn’t get a shot and kicked it to Joel Berry, there should have been a timeout call. UNC still had 3 timeouts and 7 seconds on the clock, if they couldn’t get an inbound, they would have had 2 TO’s to use. Seven seconds is also an eternity to set up a play.

What happened? Well, we know the rest and Williams was left complaining about not getting a foul call in the press conference. It was laughable how bad he handled that last possession, which has summed up his last 5 years or so in Chapel Hill.

Let’s go back to the final 10-11 minutes. Duke, playing with pretty much 5 players (more on that in a little), had Marshall Plumlee with 4 fouls. Potential ACC Player of the Year and All-American Brice Johnson was absolutely murdering Duke. He was getting whatever he wanted and had a double-double at halftime. Guess, who didn’t touch the ball the last 10 minutes? It made what Johnny Jones does with Ben Simmons look like the best damn coach in the land. Instead of giving the ball to Johnson or even Justin Jackson, who was having a decent game, Carolina decided to let outside jumpers fly.

Hint: North Carolina shoots roughly 4 percent from outside the paint.

The other let down, which I’ve said before has to be Marcus Paige. This is a game Paige should thrive in – if he was half the player people make him out to be. The fact people had him as Preseason National Player of the Year last year and Preseason All-American this year is laughable. He’s recently raised his 3-point percentage to 34 percent. Something he’s supposed to be ‘dominant’ at. He’s not even the best guard on his team anymore with the improvement of Joel Berry and last night Paige went 2-10 from the field and 0-6 from the 3-point line. People still want to chirp about Paige not being a top 10 PG or SG anymore?

A lot of questions came in for the Mailbag this week. If you want to submit questions or if I missed anything, follow me @barstoolreags

This has been asked quite a bit the last 24 hours and really throughout the year. Half of UNC fans are fed up with Williams and ready for a new face. Someone threw out Shaka Smart as a suggestion and there’s just no way he leaves Texas after 1 year, especially with the way his team is playing. Texas seems like the right fit for Smart so I’ll rule him out. I think there are only a couple options for UNC, since they won’t take anyone who hasn’t coached in one of the six major conferences, with the exception of one person and that’s Gregg Marshall from Wichita State. That leaves Chris Mack (Xavier), and Thad Matta (Ohio State). I believe it will be Marshall though to be the next head coach if Williams gets fired (he won’t – the only way he leaves is if he retires). Marshall is young enough that he can coach at UNC for at least a decade (likely more) and has had great success in Wichita. With the uncertainty of possible sanctions, it will deter some of the bigger names to come (i.e. a Brad Stevens and likely Archie Miller).

I love this question. So we’re not going to do a ‘trade’ but let’s say there is a free agent pool and each team gets to select their best fit. We’ll take a look at a couple teams and what player they’d most want to add and why.

Kansas – Damion Lee (Louisville): Hey, if you can’t play in the NCAA Tournament you’re still eligible. Kansas would add a true wing player and size, so they can bring Devonte’ Graham off the bench, adding even more depth. Not to mention they have a go-to scorer from the wing spot now.

Michigan State – Bryant McIntosh (Northwestern) – With the injury to Tum Tum Nairn, the Spartans need point guard help. Adding McIntosh moves Valentine off the ball and the Spartans get a true point guard.

Oklahoma – Shawn Long (Louisiana-Lafayette): The Sooners obviously don’t need any depth in the backcourt, so let’s add a big guy that can step in and start next to Ryan Spangler and add some depth with Khadeem Latin moving to the 6th man. Long is averaging a double-double and instantly solidifies the post.

Kentucky – Jameel Warney (Stony Brook): Kentucky needs a big guy that can bang in the post and protect the rim. With Alex Poythress hurt, the 6’8” Warney brings 3 blocks and 10 rebounds a game to Kentucky. This moves Marcus Lee back to the bench, providing energy and saving his fouls.

Villanova – Michael Carrera (South Carolina): In order to fit Villanova’s rotation, they need a stretch 4 that can provide defensive rebounding as well. Carrera is shooting 46 percent from deep this year while also grabbing 7 rebounds a game. He’s undersized at the 4, but plays bigger thanks to his role at South Carolina.

Maryland – Gary Payton II (Oregon State): He’s a much better version of what Dion Wiley would have been. He provides defense from the combo guard spot that more importantly gives Melo Trimble rest during the game and can provide scoring when Trimble is struggling.

ICYMI: Big Cat and I did a podcast together where we talked about Roy Williams as well as made Final Four picks. This was recorded a day before the UNC/Duke game, so we sound real smart.