Of course. And can you blame him? Here is a blog I wrote last year about the ’90’s Cowboys and all their stories that deserves to see the light of day once more. Incredible stuff.

Not Enough People Remember HOF DE Charles Haley Was A Madman And, Among Other Things, Used To Jerk Off In Team Meetings 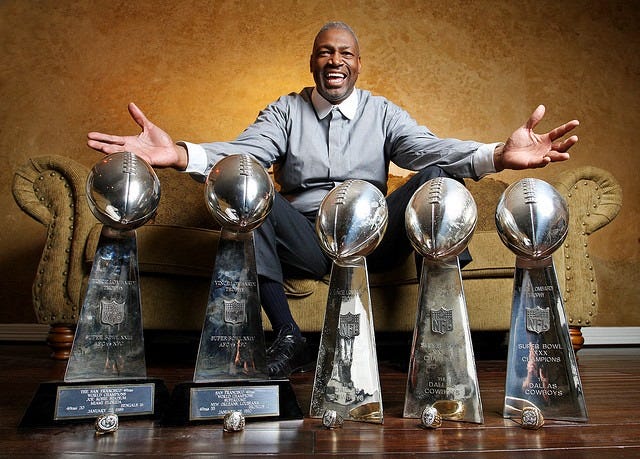 (If I had 5 rings with a dick that could conquer small nations, I guess I’d be that happy, too.)

So last week during an useless Tim Tebow post I casually (somehow) mention “Charles Haley used to whip out his dark horse dick and jerk off to the point of ejaculation during team meetings, and he’s in the NFL Hall Of Fame”. All of which is true. No harm no foul, right? I assumed it was common knowledge that Charles Harley was a sadistic madman. Well, judging by the backlash of people asking WTF I was talking about, more people need to be educated.

-At a team meeting, Haley got the attention of Scott Case and when Case looked over at Haley he was faced with “Haley’s erect penis stretched across the desk.”

-“Haley would stroll up to an unsuspecting (49er) teammate, whip out his phallus, and repeatedly stroke it in his face. Players initially laughed it off…”

-Haley, ever the prankster, cut a hole in the roof of teammate Tim Harris’ car, got on top, and pissed inside.

-Haley, on his way from the bathroom to a team meeting, pulled down his pants, wiped his ass, and then threw his shit-stained toilet paper at 49ers coach John Marshall.

-Addressing attempts by coaches and staff to end Haley’s abuse, the auother mentions, “Haley refused to stop. He would jerk off in the locker room, in the trainer’s room. He’d wrap his hand around his penis, turn toward a Joe Montana or John Taylor, and bellow, ‘You know you wanna suck this!’” He would then proceed to graphically talk about other player’s wives and bring himself to orgasm.

-Of course, I’m sure you’re not shocked to find out at this point that Haley was also a homophobic prick, as, in addition to greeting a new teammate once with simply, “You’re from California? You must be a fucking faggot.” He also once berated Steve Young with the following tirade after a loss: “I could have fucking won that game in my sleep! You’re a motherfucking pussy faggot quarterback! A motherfucking pussy faggot quarterback with no balls!”

Impressive. Pissing through a teammates sun roof is one thing. Throwing shit-stained TP on coaches is another. But you know a player is that good when he can tell Joe freaking Montana to blow him then ejaculate in front of his face, all while talking smack about the legendary QB’s wife, and not get reprimanded one bit. That, my friends, is power.

Oh, and other fun Cowboys tidbits from Boys Will Be Boys (via here). They seemed like a civilized bunch:

-Born again Christian, former mink coat strutting, hooker and coke loving, AMAZING wide receiver Michael Irvin and “Scissor Gate.” This being where Irvin attempted to end teammate Everett McIver’s life by stabbing him in the neck with a pair of scissors for not giving up his seat at the barber shop so Irvin could us his team seniority to cut in line for a haircut. Irvin then paid McIver to not press charges/keep it out of the press.

-On Christmas one year, Emmitt Smith gifted his teammates with his own autobiography. Later, when cornerback Clayton Holmes asked Smith to sign an autograph for his mother as she stood nearby, he replied, “I ain’t signing shit!”

-In addition to that, the team itself instructed American Airlines to hire attractive attendants for their team flights. They would then keep a book filled with photos and the lady’s measurements to request the same attendants for future flights.

-Another choice Irvin moment came again with his “charity” basketball team when he punched a volunteer referee during a game. Also, he charged a large appearance fee for one of the team’s events, sticking the Little Dribblers of Fairfield Texas with a charge of$5,600 before abruptly raising the fee, failed to show up, and refused to refund the original fee afterward.

-Pot bust legend-criminal Nate Newton once hid a Snickers bar in his uniform during a game to have an on-field snack as his 350 pound hunger lust could not wait 3 hours to devour a chocolately snack. Apparently, during a block, the Snickers fell out of his jersey causing cornerback Larry Brown to ask his teammates, “Did a damn candy bar just fly from Nate’s body, or am I imagining things?”

-Team owner Jerry Jones once used his premature ejaculation problem as a pick up line when he said, “Give me five minutes and I’ll take you to heaven,” to a friend of a reporter. He then asked the woman what kind of panties she had on under her skirt.