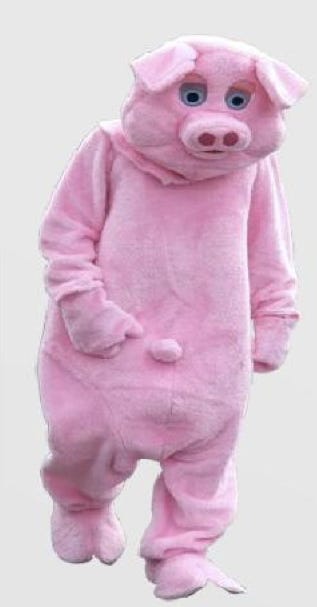 (AP) — An international animal advocacy group launched a protest against a New Hampshire winter carnival event billed as a “Greased Pig on Ice,” but withdrew it after learning there’s no pig in the act just a man on skates in a pig costume with dollar bills tied to his tail. Steve Smith, an organizer of the 100th Newport Winter Carnival, said People for the Ethical Treatment of Animals, or PETA, launched its alert last week despite his reassurances that no pigs would be harmed during the Saturday event. Smith said he received about 100 emails from concerned animal lovers. PETA spokeswoman Daphna Nachminovitch said Smith did not clarify what the event would entail. She said the updated information is excellent news for the pigs.

This story is such a perfect microcosm for the world today. Everyone has their trigger words that they’re looking out for because they’re so ready to get offended and yell rather than actually hearing what something is about. It’s simply incredible. I mean the world’s foremost authority in animal rights couldn’t be bothered to read the description of an event before they began planning their protest. They read “pig,” recognized that as one of the words they’re supposed to defend to the death, and grabbed their pitchforks. It’s the same thing feminists do with “bitch” or “rape” and the same as Pats fans do with “deflate.” Wait, was that a series of letters that form a word that I’m conditioned to be offended by? LETS GET HIMMM!!!!! Marvelous. You really couldn’t make this stuff up.