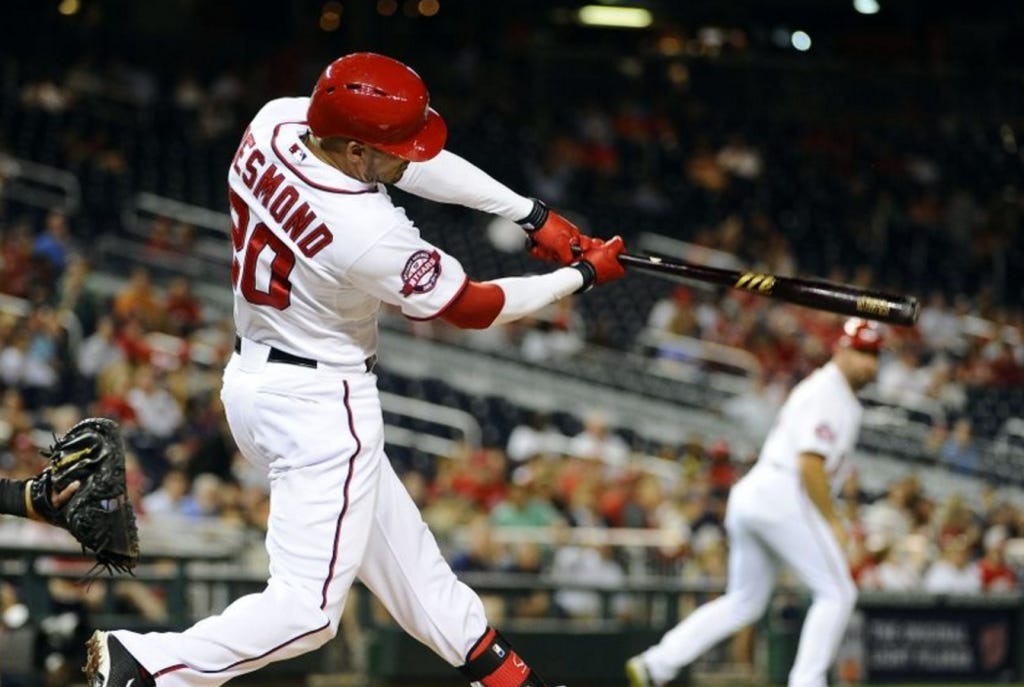 When the negotiations begin for baseball’s next collective bargaining agreement, the qualifying offer is going to be a huge talking point.

And when the qualifying offer comes up in conversation, Ian Desmond — along with Dexter Fowler, and Yovani Gallardo — will probably be used as prime examples as to how the system unfairly punishes the players. All three of those aforementioned players are without a job, as most spring training camps are more than half full. ESPN ranked Fowler as the No. 8 free agent this offseason, with Desmond coming in at 19, and Gallardo at 31.

It’s clear that teams really value their first-round draft picks, now more than ever, if they’re unwilling to part with them in order to sign a player like Fowler or Desmond, but it seems like there might be some movement on the Desmond front. Ken Rosenthal reported last night that the Colorado Rockies might be interested.

The Rockies’ first workout for position players is a week from Thursday. Imagine the public-relations turnaround if Ian Desmond and not Jose Reyes was the shortstop who walked through their clubhouse door.

Reyes, 32, is almost certain to be suspended under baseball’s new joint domestic-violence policy, even after pleading not guilty to a charge of domestic abuse in Hawaii. Desmond, who remains a free agent, looms as a logical replacement on a one-year deal.

The Rockies have been in contact with Desmond’s representatives, major-league sources say, but any pursuit of the shortstop likely will be linked to baseball’s decision on Reyes, who would lose a prorated portion of his $22 million salary if he’s suspended.

As Rosenthal mentioned, the Rockies are concerned over how much time they’ll lose their $22 million shortstop for, as he’ll definitely get slapped with a suspension under MLB’s new domestic violence policy. Under the policy, there is no set number of games for first-time offenders, or any number of offenses after that. Here’s how the discipline is explained under the policy:

The Commissioner will decide on appropriate discipline, with no minimum or maximum penalty under the policy. Players may challenge such decisions to the arbitration panel.

With the uncertainty surrounding how much time the Rockies will lose Reyes for, as a result of his arrest this past October for grabbing his wife by the throat, Colorado will look to the best available free agent shortstop in Desmond.

Desmond is coming off a bit of a down season, hitting .233 with a .674 OPS. That’s a 114-point drop-off in OPS from what Desmond averaged from 2012 through 2014. I’m sure he’s kicking himself for it now, but the Nationals actually offered Desmond a seven-year deal worth $90 million in the 2013-14 offseason, which would’ve bought up his last two arbitration years, and five years of free agency. Desmond, of course, turned it down.

The Rockies’ first-round, No. 4 overall pick is protected, so they would, instead, lose their No. 38 pick for signing Desmond. As Rosenthal suggests, the Rockies could trade Desmond once they get Reyes back, or hold onto him and make him a qualifying offer to collect another draft pick when he signs elsewhere after 2016. On a one-year deal, it makes a ton of sense for both sides, as Desmond could rebuild his value in Colorado, where he’s a lifetime .407 hitter with a 1.098 OPS in 92 plate appearances. It’s his highest OPS in any ballpark with a minimum of 70 plate appearances. And then the Rockies get a more than suitable replacement, while Reyes serves his suspension.