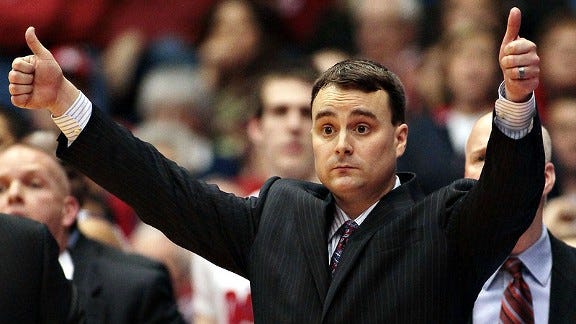 Those include the likes of Villanova, Oklahoma, Kansas, Virginia, Duke, UNC, Kentucky, West Virginia, Iowa, Michigan State, Maryland, Arizona, Xavier, Miami, Arizona, Iowa State and Purdue. Would it really shock anyone if someone from that group won it?

So, last night Big Cat asked me a great question. What about those teams who are a little deeper ranked on KenPom? What teams from like 25-60 could get hot at the right time and win the whole damn thing as a No. 6 seed?

So, here are a couple teams that are flying a little under the radar that can make a run to Houston this year. Am I missing someone? Let me know @barstoolreags

Texas (No. 23 on KenPom) – This team is not nearly getting talked about enough as they are starting to get hot at the right time. The Longhorns have actually been better with starting Cam Ridley sidelined to injury thanks to the improvement of Prince Ibeh, who is looking the part of a big time center. Texas has swept West Virginia and beat Vanderbilt, Baylor, Iowa State, North Carolina and Washington this season, so they have a ton of quality wins to get them ready for NCAA Tournament play. Shooting and halfcourt play will still scare me when it comes to Texas as they rank 199th or worse in 3-point shooting and free throw shooting, but their defense is strong enough to create offense. On top of that they have a guy in Isaiah Taylor who can go get his own shot, which is something always needed in March. Oh, Shaka Smart is familiar with the NCAA Tournament and miracle runs too.

California (No. 32 on KenPom) – This is one of the teams that have to be considered a major letdown from preseason expectations. That said the Golden Bears still have one of the best starting fives in the country. My biggest concern for Cal? An away/neutral court record of 1-8. They can’t play their NCAA Tournament games in Berkley, so that might be a bit of a problem. However, Ty Wallace is back healthy and does a little bit of everything for Cal, leading them in assists, second in points and third in rebounds.

Baylor (No. 35 on KenPom) – The Bears have a deceiving record due to having to play in the brutal Big 12 this year. They really only have one bad loss on the year, a home game to Texas Tech (No. 41), the other 6 losses have come to teams ranked No. 23 or better. Shockingly, the problem with Baylor this year is defensively, which usually isn’t the case for a Scott Drew team, especially with the depth and size Baylor has. They have one of the best rebounders in the game in Rico Gathers, who is a monster on the offensive glass. There’s also been the improvement of Lester Medford, who has a 7:2 assist to turnover ratio. Taurean Prince is a name to know, as he’s the most underrated star in college basketball. Prince is a senior that can absolutely take a game over when needed and is currently averaging 15 points a game.

Dayton (No. 39 on KenPom) – I absolutely love this Dayton team. They have it all, whether it’s scoring, defense and coaching. They have one of the best coaches in the game in Archie Miller, who has turned this Dayton team into one the best programs not in the power 6 conferences. This year the Flyers were able to overcome half the season without Dyshawn Pierre, who is their best player. Since his return Pierre is averaging 13.5 ppg and 7.3 rpg. He also can stretch the floor, shooting 39 percent from deep. The Flyers have the capability to go small with Pierre playing the ‘five’ spot or can go big with Sam Miller and Steve McElvene, two freshmen who stand 6’9” or taller. They rank in the top-85 of both AdjO and AdjD, along with 33rd in the country in effective field goal percentage. My fear with Dayton is their inability to take care of the ball, especially with an experienced team. They turn it over 19.4 percent of possessions, which is 251st in the country.

It’s time for ESPN to slob all over Duke-UNC and ‘Rivalry Week’ tonight in a game where Coach K will completely outcoach Roy Williams but UNC should be talented enough to win. This game is  being played at Chapel Hill, where a ton of old people will ruin the atmosphere because they refuse to get loud except for big moments – I’ve been at the Dean Dome before, it’s one of the least impressive crowds. This is the problem with UNC, Kentucky, UCLA and a lot of other big time programs, their lower level is often filled with donors instead of students. But, I’m on a tangent here. Expect a TON of zone from Duke, especially with Carolina struggling to shoot the ball and the Blue Devils struggling to play any sort of defense. The matchup I’m most interested in watching is Isaiah Hicks on Brandon Ingram. Assuming UNC holds true to its typical starting 5, Ingram will have a mismatch on the offensive side of the ball. It wouldn’t shock me to see Carolina go ‘small’ moving Justin Jackson on him defensively and provide more shooters to beat the zone. I expect Carolina to get a ton of easy buckets though and while the game will be close, give me Carolina by 7.

I was joined by Chicago’s Big Cat to talk some Wisconsin hoops – especially what they should do with the coaching search after the season. We also relive the Final Four, talk some Nova from their No. 1 fan and he makes his Final Four picks.