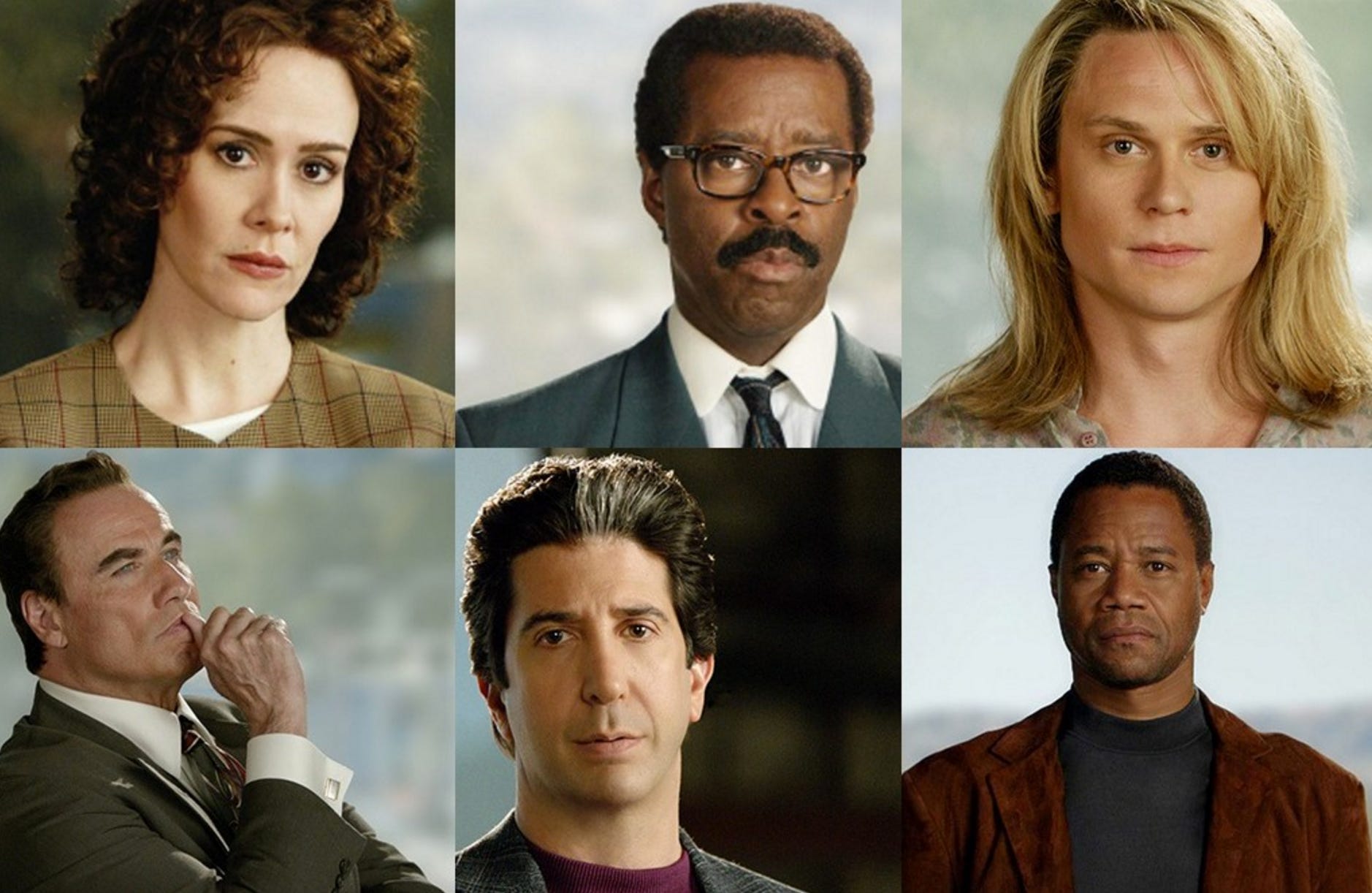 First thing’s first, this mini series is officially called “The OJ Show.” Forget all that People vs. OJ Simpson nonsense. Its “The OJ Show.” And the OJ Show is the hottest, most talked about thing on television right now. Up until last night, this show was a JOKE. Some blogs and outlets were praising the show as powerful and brilliant and I legit thought I was on the Truman Show being pranked by everyone else. I thought the entire world decided to fuck with me and pretend this show was masterful TV. The first two episodes were maybe…MAYBE…on par with a Lifetime movie. We were in “so bad its good” territory and the world was still telling me how moving Cuba Gooding was and how excellent the show was. Bananas. The saga is incredible enough to carry shitty acting.  Its the most high profile suspect, the most grizzly circumstances, and the most improbably outcome in what is probably the most high profile murder case in history. Thats gonna be entertaining no matter what. But lets call a spade a spade – garbage.

Last night started off the same, complete trash. But by the middle they started to good and towards the end it was actually the show I wanted it to be. The Good, The Bad and the Ugly from episode 3, starting with the Ugly:

Fucking ONE SECOND into the episode we’re getting more Kardashian’s jammed down our throats. I dont pretend to be an expert on the OJ Case. I was just a kid myself. But I cant help but feel people that didnt live through the OJ saga at all actually believe the Kardashian kids had something to do with this whole trial. They have ZERO to do with OJ and yet they’ve made very blatant, deliberate appearances in every episode. All three episodes have shown the Kardashian’s in order to convey some sort of satirical take on who they are and what they’ve become. “You’re Robert Kordovian!” – Wow, can you believe there was once a time when the world didnt know who the Kardashians were!” “Being a good friend is more important than being famous!” – Wow, I guess Kim and her sisters didnt get their father’s message! Of course Kim Kardashian was a ball hog! Who fucking cares! I’m trying to watch a show about the greatest legal defense to ever occur in the justice system, I dont need ironic and satirical flashbacks to the Kardashian kids every week.

F minus. Whats lower than an F minus? Guy is TERRIBLE. Feits blogged about Cuba’s ridiculous take on how the Darkness took him over, like he was fucking Daniel Day Lewis method acting and losing his mind. He’s just doing the same acting he always does and hes not good.

Whats lower than F Minus? Schwimmer as Robert Kardashian. Just atrocious. The dude is Ross Gellar through and through and it shows every time he opens his mouth. Whats worse is that I thought maybe that Robert Kardashian was this big of a loser and so Ross was just playing the part correctly. But according to the dude who wrote the book, its anything but that:

So it seems like its shitty acting, shitty writing, a shitty portrayal of the person, and hes the gateway to all the Kardashian kid appearances. Thanks for this, Schwimmer.

I cant decide what I think about Travolta. I know for a fact he creeps the shit out of me. His face is plastic, his lips have disappeared, and he doesnt move his mouth when he talks.

Which, again, I was kinda like “Well everyone else in this show except for Cuba is a dead ringer for the person they are playing, maybe thats what Shapiro actually looked like: 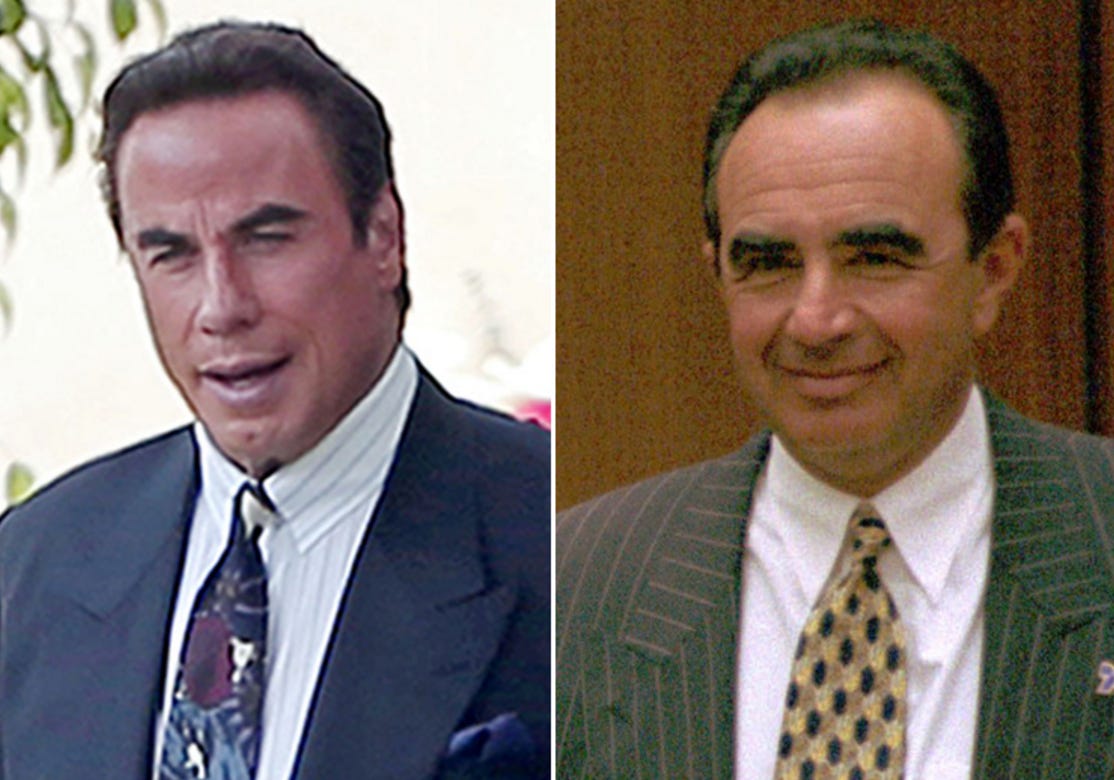 Nope. Not even really close. Yet I find myself intrigued when hes on camera. Last night’s episode where he was pushing the racial angle and pulling the strings behind the scenes with the New Yorker article was the kind of shit I wanted to see in this show. So while Travolta’s face my be a science experiment and he may talk like a ventriloquist dummy, he’s furthering the plot here and getting to the good stuff. So hes a step up from the Ugly, and he paves the way into the good stuff:

Gotta be the first ever “motherfucker” on basic cable, no?

This is really what this saga is about in my eyes. The legal cat and mouse game that led to the greatest upset a murder trial has ever seen. And its primarily a showdown between Paulson and Courtney Vance that drives this back and forth. These two are by far the best actors on the show which is good because its by far the most important dynamic of the show. Although, I will say – we get it, Marcia Clark smoked a lot of cigarettes. (Sidenote regarding that – I think what this show lacks is any sense of subtlety. Theres a lot of cool easter eggs and nuggets, and the show just bases you over the head with them instead of smoothly dropping them in. i.e. when Dominos had their best day of business ever during the Bronco chase because so many people were ordering in as they were glued to their TVs, and they just shoehorned a scene at Dominos in there “This is crazy! I cant keep up!” Little things like that or how they constantly get the Kardashian name wrong or she’s always smoking cigarettes just come off worse than the could have)

The Prosecution vs the Defense

Bigger than just the portrayal of Marcia Clark and Cochran is the overall legal teams strategic battle. Last night was the first time we started to approach the trial and the entire second half of the episode was really great and showing the moves and counter moves each side was making. Which is crucial because they needed to convey how much of a slam dunk this should have been, and how small missteps here and there combined with brilliant plays by the defense will eventually build up to a not guilty verdict. The whole episode was a back and forth between both sides:

Prosecution – “I dont want an all white jury”

Defense – “Just get me one black juror”

Prosecution has a major trump card in the 911 calls, but they get swept under the rug because they’re released at the same time as the Mark Furhman article in the New Yorker. Marcia Clark’s black assistant dude foreshadowing trying to explain to all the white people on the prosecution how this isnt a slam dunk and black people dont think he did it. The episode overall framing how this trial was occurring right after Rodney King and right before DNA evidence was truly handled correctly and understood by the general public. It all starts to build up the story that explains the most important question in the OJ Trial – how the fuck did this guy get off?? There was like 5 or 6 things that occurred in this episode where you start to see how they ended up missing what should have been an uncontested slam dunk, and thats the most fascinating part of this story.

Kato Kaelin getting all the bitches to flash him their titties

I cannot wait to get to the trial with this dude. Gonna be back into that “so bad its good” territory but it will for sure be entertaining.

All in all, show started to take a turn to where I think everyone hoped it would be in the first place. Put the first two episodes out of sight out of mind and hope the final 3 get the job done. (Update – There’s more than 3 episodes left. I was looking at the American Crime Story wikipedia that only has 6 listed for some reason. Theres 10 total so still plenty of time)