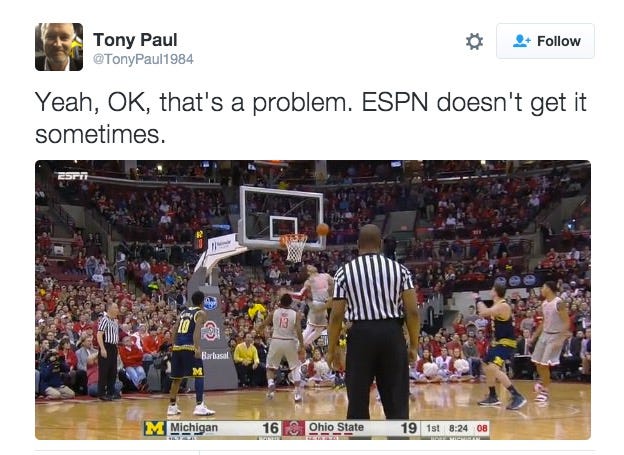 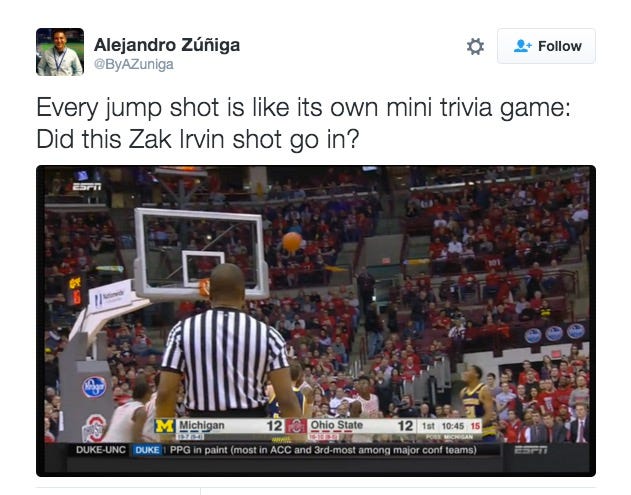 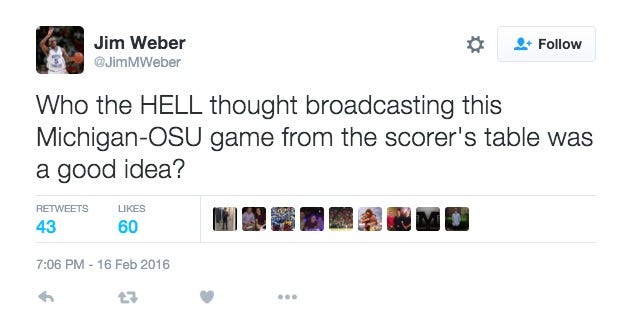 Columbus, Ohio — Michigan fans were all riled up. And that was even before the loss.

Twitter has spoken, and Twitter did not at all like the “floor seat” camera angle ESPN used for most of Tuesday night’s 76-66 victory over Michigan at Value City Arena.

ESPN had camera operators sitting in front-row seats to try to show fans a unique view of the Big Ten rivalry game. But fans, on a whole, weren’t pleased, complaining they couldn’t see many of the shots because referees often were in the way.

ESPN on Tuesday night told The News that it would evaluate feedback before bringing back the “floor seat” shots.

Did ESPN do it again or did ESPN do it again? Referee Asshole Camera. Revolutionary. Try and think of the best way to make a huge Michigan/Ohio State college hoops showdown more exciting. Is the first thing you came up with, “make the viewers at home guess if half the shots go in because the referee’s fat ass is blocking the hoop?” If so, you’re in agreement with the suits and focus groups at ESPN. Absolutely nailed it.

“The ‘floor seat’ camera angle during (Tuesday’s) ‘Super Tuesday’ Michigan-Ohio State game was a new and creative way to show the athleticism and speed of the talented players of the Big Ten Conference by giving viewers different access to the game,” Rachel Siegal, a spokesperson for ESPN, told The News in an e-mail. “We will review all feedback after the game and continue to learn and provide fans with the best possible viewing experience.

“ESPN was built on trying new things and taking risks, and tonight is just another example of that.”

What a risk. Courageous is what it is. Running into a burning building, storming the beaches of Normandy, sticking a camera on a scorer’s table and switching the flip “on.” History doesn’t remember those who play it safe.