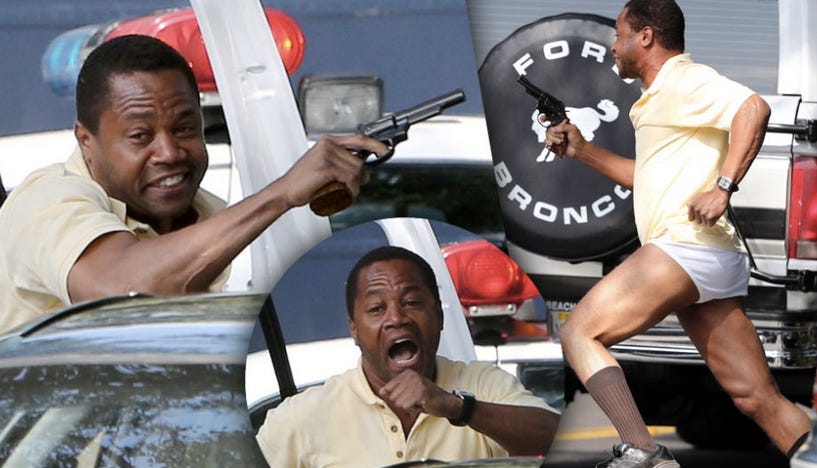 (Complex) – For the past few weeks, the average person’s Twitter TL has promptly exploded each Tuesday night at 10 thanks to Ryan Murphy’s fascinating American Crime Story: The People v. O.J. Simpson. Though David Schwimmer and John Travolta are certainly shining quite bright indeed as Robert Kardashian and Robert Shapiro, respectively, the bulk of the attention is focused on Cuba Gooding, Jr.’s powerhouse performance as the subject of the most famous murder trial in American history. In a new interview with Larry King, Gooding Jr. breaks down the intense emotional strain of portraying Simpson in the inaugural season of American Crime Story. “It’s one of those things where, I didn’t want to meet him playing him at this time in his life because I think I know what incarceration is meant to do to you,” Gooding Jr. says of the possibility of meeting Simpson, adding that “people can convince themselves of a truth even though it isn’t a reality.” Likening the experience of filming American Crime Story to Heath Ledger’s performance as The Joker in Christopher Nolan’s masterful The Dark Knight, Gooding Jr. is quick to acknowledge the profound mental stress of diving into such an infamous and harrowing tale of real-life violence. “I would tell myself ‘I’m just playing a character,’ you know, but sometimes I speak of this nervous breakdown I had when we were shooting [Nicole Brown’s] funeral scene.” According to Gooding Jr., the process of shaking off the “darkness” of portraying O.J. Simpson took more than a month. “I promise one day I’ll binge-watch [the series],” Gooding Jr. says, adding that he has yet to watch the previously aired episodes. “It was such a dark six months going into that mindset of doing these scenes.”

Who thinks Cuba Gooding Jr. is actually doing a satisfactory job in this OJ Simpson show? Go ahead, don’t be afraid to admit it. Somehow you’re in the majority. I legitimately feel like I’m taking crazy pills with this one but people are absolutely eating it up. Aside from the fact that the OJ saga is an incredible story this show stinks. Schwimmer stinks, Tavolta stinks and/or is perfect (haven’t quite figured that one out yet), and Cuba Gooding Jr. STINKS.

Yet here we are with Cuba Gooding Jr. telling Larry King that he fell into a darkness comparable to HEATH LEDGER, a guy whose darkness was so dark he fucking died. Get out of my face, Cuba. Get all the way out of my goddamn face. You want me to believe you were method acting a murderer but didn’t lift a single weight to even try to have the body of a former professional athlete? You spent hours twisting your mind into an enraged pretzel, but couldn’t mix in a push-up? Look at those pictures, Cuba! Look at them! That is not OJ Simpson, that’s Radio.

The funeral scene the Cuba references? The one that caused a breakdown? He’s in it for legitimately 30 seconds and is terrible. That scene is more about forcing the Kardashian narrative, as little Kim, Khloe, and Kourtney run wild at the service than it is some powerful, and emotional piece of television. The whole show just stinks. It’s bad writing, bad acting, and the Kardashian children playing a way bigger role than I’d venture to guess they played in reality.

Some actors are absolutely method actors who dive into their roles headfirst then take weeks to resurface. Cuba Gooding Jr is not one of those actors. He just weeps, whines, and yells. And none of it is believable. Weeks to get out of the darkness? My left foot, pal.