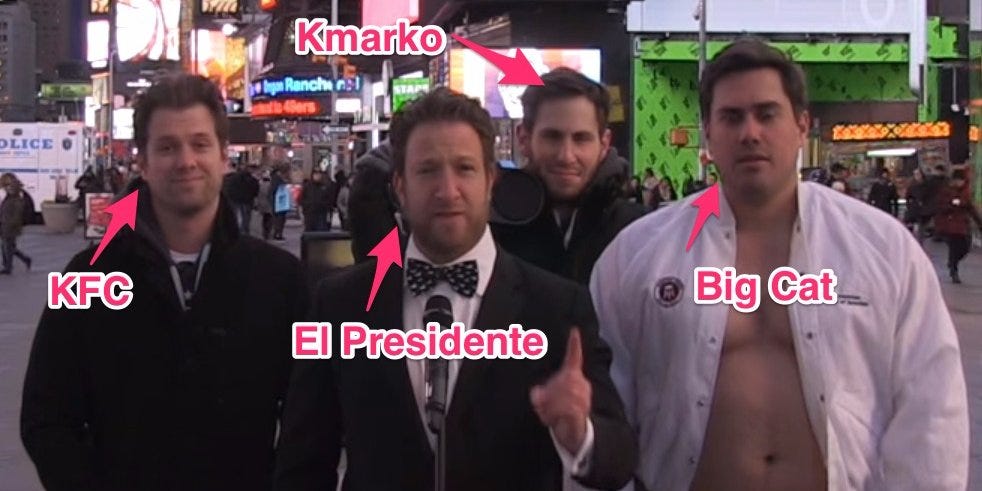 We are officially in Selection Sunday countdown mode, with just a couple weeks remaining of the regular season in college basketball. So, let’s take inventory of where we are and update a couple things from earlier in the year.

First off, let’s start this post off by taking a look at each bloggers team and where they stand to get into the NCAA Tournament. I mean, I know it’s not talking about if a blogger is gay or not, but hell, it’s basketball season.

You can follow me @barstoolreags for all your college hoops talk the rest of the year.

Let’s start off with the guy who needs to go first.

Michigan, 19-7, 9-4 Big 10 (Pres) – Michigan looks to be firmly in the NCAA Tournament after missing out last year. The Wolverines were able to play pretty good basketball without star Caris LeVert, who just returned from yet another injury. They have wins over Maryland, Purdue and Texas on the year, so right now it’s just about seeding. Derrick Walton Jr., has been one of the more improved players this year, starting to score more and Duncan Robinson is arguably the best shooter in college hoops. I expect Michigan to end up around a No. 8 seed.

Florida State, 16-9, 6-7 ACC (Feits) – How Florida State is choking away the year with this roster is pretty impressive. Leonard Hamilton is doing everything in his power to be discussed in the same breath as Johnny Jones. The Seminoles have a three-headed monster in Dwayne Bacon, Malik Beasley and Xavier Rathan-Mayes, yet sit below .500 in ACC play. They should finish the season strong with games against Georgia Tech, Virginia Tech, Duke, Notre Dame and Syracuse. Go 3-2 in that stretch and win 2 ACC Tournament games they are in. Otherwise, it’s a complete wasted season for the Seminoles.

UMass, 11-13, 4-8 A-10 (Dana) – Eh, this team sucks. Granted they have a couple nice wins over Clemson and VCU, they also had a stretch of losing 7 games in a row. There’s no chance this team makes the NCAA Tournament and no chance they advance in the A-10 Tournament. Donte Clark is someone to get excited about though as he’s second on the team in scoring with 17 points a game.

Fordham 12-11, 3-9 A-10 (KFC) – There was a stretch early in the season where it looked like Rose Hill Gym was going to be a place to watch decent basketball. The Rams were 9-1 with a win over St. John’s (yeah, I know they suck, but still). Then A-10 play started and the Rams, well fitting for KFC and his brother, showed up. If Eric Paschall stayed with Fordham, there’s a chance they’d be .500 in the A-10 this year, but it’s going to be a long time until Fordham is good.

Siena, 18-9, 11-5 MAAC (Clem) – Everyone’s favorite food reviewer actually has a decent mid-major team to cheer for. Jimmy Pastos has the Saints in position to compete for a NCAA Tournament berth. Everyone wants to talk about Monmouth in the MAAC and rightfully so, but Siena is sitting at 11-5 in conference play. They will likely avoid Monmouth until the conference championship game, where anything can happen and Siena as a program has had plenty of experience. Marquis Wright is the key to this team winning as he plays nearly 38 minutes a game and leads the team in points and assists. Don’t rule them out for stealing a bid in a couple weeks.

Wisconsin, 16-9, 8-4 Big 10 (Big Cat, Charlie, Sam’s Army) – Don’t look now but the Badgers are almost a top-25 team and look to be getting closer to being in the NCAA Tournament than on the bubble. It’s a Greg Gard miracle that this team is succeeding despite going back to the old swing offense. However, they’ve won seven in a row including at Maryland and against Indiana and Michigan State. They have two more easy games to finish the season and if they can steal one against Michigan State, Iowa or Purdue, I think they are nearly a lock to be inside of the bubble. This team will go as Nigel Hayes go, which isn’t shocking.

Susquehanna, 19-3, 10-3 Landmark Conference (Smitty) – Hey, we have the No. 18 team in D3 to talk about here. The soon to not be named Crusaders are the pride of central Pennsylvania right now as they look to be a top seed in D3 Hoops. If you’re into D3 basketball, Josh Miller is a name you need to know putting up over 16 points and 8 rebounds a game.

Ursinus, 10-11, 6-8 Centennial Conference (Jordie) – Where else can you find a blog going from Wisconsin to small Pennsylvania colleges? This team, much like Jordie’s professional teams sucks. Big game tonight though against nationally ranked Franklin and Marshall, so if you’re in the area go watch that.

Maryland, 22-4, 10-3 Big 10 (Banks, Nate) – Maryland seemed to catch a break when Indiana beat Iowa, giving the Terps the ability to control their own destiny due to the tiebreaker over Iowa. However, the Wisconsin game happened and there should be a little fear going forward for Maryland fans. First off, I’m not going to rip Diamond Stone, but he can’t be as dumb as shit like that game. Expect people to try to piss him off going forward. The concerns though are the depth at guard and the inability to rebound. It’s rather shocking that this isn’t a good rebounding team with Robert Carter Jr. and Diamond Stone, along with a ton of depth in the frontcourt. This team still has Melo Trimble though, which will help in the NCAA Tournament, but they are somewhat failing to live up to preseason expectations so far.

Towson, 18-9, 9-5 CAA (RDT) – This team has scored under 50 points 3 times, including scoring 37 once. William Adala Moto is legit though, putting up 14.2 points and 8 rebounds a game. They might pull off an upset in the CAA Tournament, but their lack of offense, I can’t see them winning the entire thing. Have fun in the CBI.

Iowa, 20-5, 11-2 Big 10 (Trent) – Clearly the surprise team this year, Iowa is in perfect form to get a No. 1 seed come March. They have an All-American and Player of the Year candidate in Jarrod Uthoff, who is going to break a couple records by the end of the season. More importantly though is the improvement of Peter Jok and Anthony Clemmons, who provide scoring threats and can help alleviate the pressure from Uthoff. Fran shirts for everyone, Trent!

Emory, 16-6, 9-2 University Athletic Association (Kmarko) – Not sure how to feel when I clicked on their website and it sent me to fill out paperwork to be a recruit. Guess I still have some years of eligibility left? Emory should make the D3 Tournament again as the UAA champion thanks to having four guys score over 10 points a game.

USC, 18-7, 7-5 Pac-12 (Spags) – In a must-win year for Andy Enfield, the Trojans are a lock to make the NCAA Tournament. With wins over UCLA, Washington, Arizona, Yale and Wichita State, the Trojans are actually doing this without cheating. The biggest reason why is their 3-point shooting. As a team they are shooting 39 percent, and have 5-6 guys that can really shoot the ball. There’s also a ton of balance for the Trojans with five guys averaging between 12-12.7 PPG.

UNC, 21-4, 10-2 ACC (Daddy Dixie) – Could this be the best team in the country? Yes. But, they haven’t looked that part really at all this season. Marcus Paige has looked like the most overhyped player the last two seasons and Justin Jackson never took that step a lot of people thought he would to start the season. However, the improvement of Brice Johnson and Joel Berry have helped this team. There’s still a murderers row to end the season with games against Duke (twice), Miami, Virginia and Syracuse.

Kentucky, 19-6, 9-3 SEC (Reags) – After being left for dead after a loss to Auburn and Tennessee, the Wildcats have looked the part of a top-10 team again. This is because Jamal Murray is finally scoring the way he should and Tyler Ulis has turned into an All-American. On top of that the insertion of Derek Willis into the starting 5, spreading the floor and giving Kentucky another shooter is making life easier for the dribble-drive. If they can improve their defense they will win the SEC yet again and be a top-3 seed in the NCAA Tournament. Or, they could lose to teams like Auburn and Tennessee and finish 3rd.

Pick Your Team for $15 – I did this earlier in the year and had people tweeting me about it the last day or two. So, I decided to update the $15 board. Give me Monte Morris, Buddy Hield, Malcolm Brogdon, Brandon Ingram and Ryan Anderson. Let me know your team. 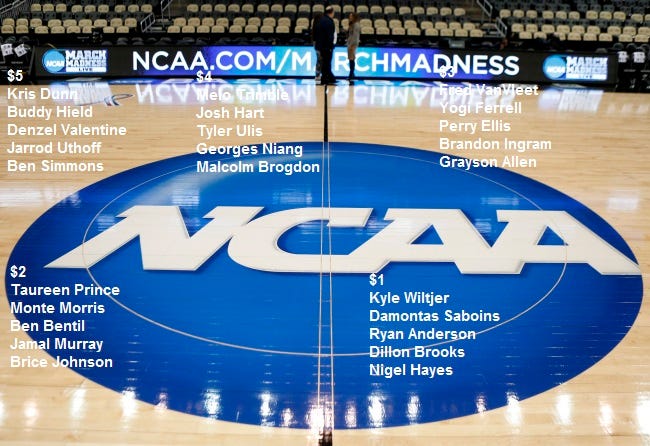