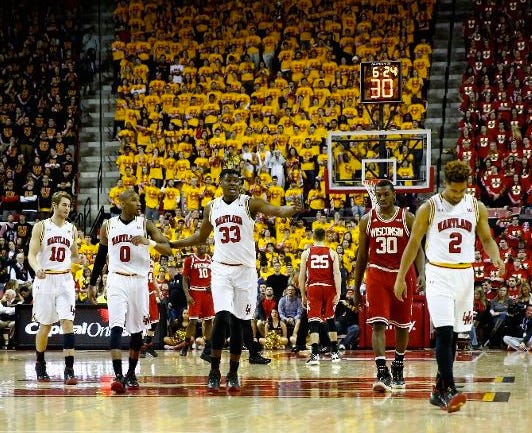 Testudo Times - The Maryland basketball program has suspended center Diamond Stone from its game against Minnesota on Thursday, after Stone pushed Wisconsin forward Vitto Brown’s head into the ground during the Terps’ game on Saturday. The Big Ten also slapped Stone with a “public reprimand” and said it considered the matter closed.

“I want to apologize to Vitto Brown and the Wisconsin basketball team for my unacceptable behavior during Saturday’s game,” Stone said in a Maryland release. “I regret that I let the emotions of the game get the best of me. I let my team down and I accept full responsibility for my actions.”

Maryland coach Mark Turgeon spoke with Stone after Saturday’s game. “Diamond’s conduct during Saturday’s game was a poor representation of the standards that we have established as a program at the University of Maryland,” Turgeon said in the same release. “I have talked with Diamond and he realizes he made a mistake. He felt very badly about what happened and will learn from this experience. I want to sincerely apologize to Vitto Brown and Greg Gard for what transpired Saturday.”

What, all of a sudden you can’t slip? Pussification of America at it’s finest.

No but really, not the brightest play by the young freshman and he’s now suspended for Thursday’s game vs Minnesota. Not exactly the worst thing for Diamond Stone at this point. The kid could use a day off, and what better game to miss than vs the 6-19 Golden Golphers? He gets to rest those knees heading into March Madness, and he learns a lesson about sportsmanship along the way.

The loss to Wisconsin knocked the Terps from number 2 way on down to number 6. They got out muscled on the boards, Melo played like crap, and it is definitely time to finally retire the “flashmob”. It was cool the first two years, but this year was basically the students doing the wave and a lot of jumping.

Not great to lose at home to Wisconsin, but not the worst thing ever. They had just beat both Iowa (ranked #3 at the time) and Purdue (ranked 18th at the time) in back to back home games, so the positive spin zone is it keeps Maryland hungry and lets them know they aren’t cakewalking to the Final 4. There are 5 more games til the B1G tournament, including at Purdue (now ranked 17th) and at Indiana, ranked 22nd. If Maryland wins out, that’d put them at 27-4 heading into March. I’ll take a 4 loss regular season, that’s nothing to be ashamed of.