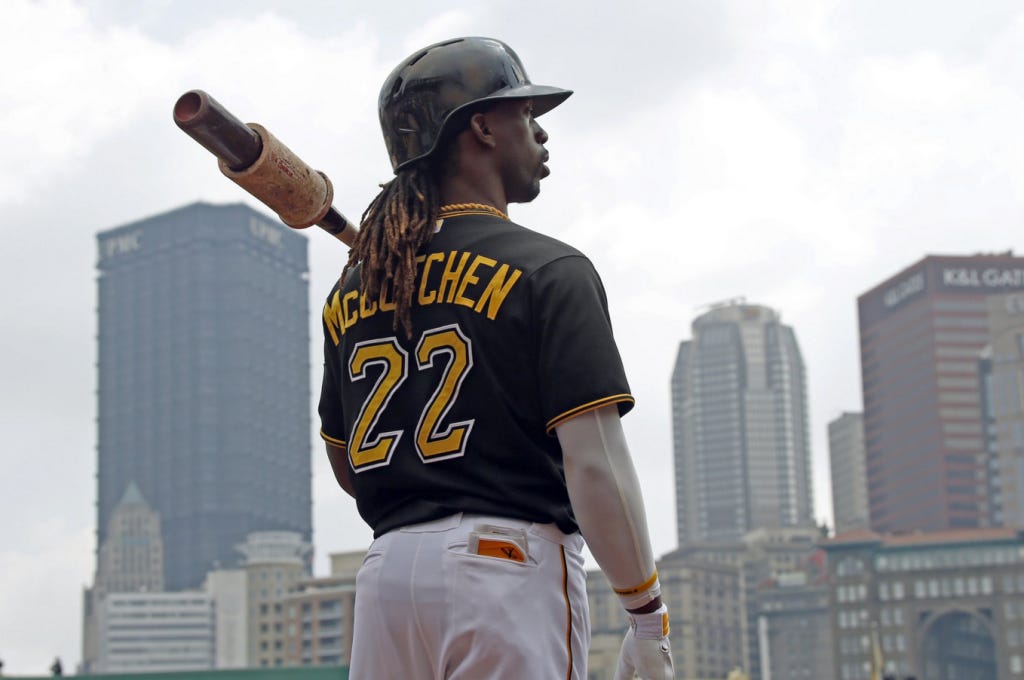 You never see this happen anymore. Free agency, trades, super agents, egos — there are many reasons why star players never play their entire careers with the same team these days.

Five-time All Star Andrew McCutchen, who has spent his entire seven-year career in Pittsburgh, was asked if he could ever see himself on the Mount Rushmore of Pittsburgh Pirates legends. With an open spot next to Roberto Clemente, Honus Wagner, and Willie Stargell, it makes you wonder if McCutchen will join the trio in their elite position in Pirates history.

If he were to do that, he’d have to follow a similar path, which is much easier said than done. Clemente, Wagner and Stargell are all Hall of Famers, and they all spent their entire careers with the Pittsburgh Pirates. Let’s worry about one thing at a time. Would McCutchen even want to play his entire career with the Pirates?

“I’m not too focused on it, but definitely I’ve mentioned it before. I’ve said it plenty times: This is a place that I’d love to be, a place that I’d love to spend my whole career, win championships and just be here. It doesn’t happen a whole lot in this game. But if the opportunity presents itself, that would be great for me, for my wife and, hopefully, one day, God willing, we have a family of our own. So that would be really cool.”

So, the interest is there on the player’s part, but will the money be there once he hits free agency in 2019? McCutchen’s contract has a no-brainer $14.5 million club option in 2018, so he’ll likely miss being a part of the most ridiculous free agent class, arguably, of all-time. That could only mean more money for McCutchen, because the 2019 free agent class is going to seem incredibly thin compared to the year prior.

But when it comes to accomplishing what his hero Roberto Clemente did by playing his entire career in Pittsburgh and being elected to the Hall of Fame, there aren’t many active players who are on a Hall of Fame pace that have also been with the same team for their entire careers. For position players, David Wright is probably somewhere in that conversation, possibly even Yadier Molina as well. Joe Mauer was in that discussion as recently as a few years ago, but has since tailed off after suffering a concussion. Dustin Pedroia is in the same boat, putting together a career that looked like it was on the way to Hall of Fame consideration before injuries got in the way.

As far as pitchers go, Felix Hernandez is a name that comes to mind. Beyond that, the one-team, Hall of Fame pace pitchers have all fallen off a bit. Justin Verlander is a guy that fits that description, along with Tim Lincecum, who won’t have the same team distinction for much longer. Beyond King Felix, I’d say Clayton Kershaw, who only has eight years in the league, has the best chance to pull off the same team, Hall of Fame combo. Really, McCutchen is just about in a league of his own when it comes to one-team players.

The Pirates were 25th in the MLB in Opening Day payroll last year, so they’re not exactly known as an organization that’s going to break the bank, which they’ll absolutely need to do if they want to keep McCutchen in a Pirates uniform beyond 2018.