RALEIGH (WTVD) — NC State student Mike Fuller is spending more than a day inside the Waffle House on Hillsborough Street in Raleigh… 30 hours to be exact.

“I’m here because my Fantasy Football league has a rule that if you come in last place then you have to spend 30 straight hours inside a Waffle House,” said Fuller, whose bet ends Saturday at 1 a.m. “Unfortunately I lost and came in last place.”

That means lots of time on his smartphone, no showers, lots of coffee and of course, waffles.

“I’ve had two waffles, two chocolate chip waffles and three cups of coffee,” he said when we caught up with him around 5 this morning. He has pillows, his backpack and books for studying at his corner booth.

“Really funny,” he said laughing…annnndddd 2 minutes later he was shot dead in a robbery gone bad, or caught a chair to the face during a brawl over a check dispute, or peed on by a stray crackhead. That’s just Waffle house life.

These “I lost my fantasy league so I have to do something crazy” bets are pretty played out at this point, so you have to have a really good one to catch my attention. Love this dude having to basically live in a Waffle House for 30 hours straight. Just sitting on this damn stool talking to Dolores the counter lady and eating All Star Specials all day. 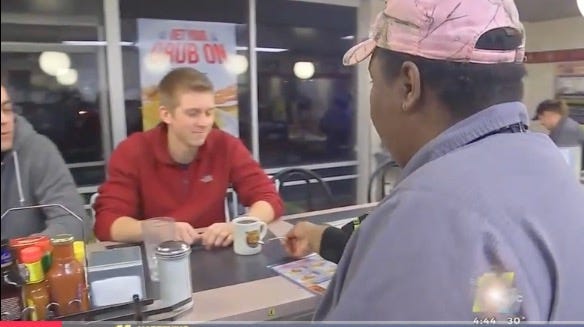 Eat, sleep, shit, hang out for over a day in one of the most deplorable places in America. It’s funny. It’s a pain in the ass. It’s actually pretty dangerous…you know how many robberies and shootings and brawls go down at a Waffle House late night? I’d guess roughly 1 per hour.

Getting a tattoo or doing open mic night at a stand up club is old news. Living your life inside a chain restaurant known for being a great place to murder a human being, a borderline homeless shelter, and fantastic waffles is the new hotness.