Savage move by this kid. For what it’s worth, Giants manager Bruce Bochy didn’t answer this fan’s question, but I would’ve been interested in his response. What does he think about Pablo Sandoval’s first season in Boston? Does he think he can rebound? Did the Giants see this coming? In the hypothetical scenario where he could have him back, would he even want him back?

My guess is probably not, and that goes beyond just his poor performance in 2015. If you recall, the second that Sandoval got to spring training last year, he said that he doesn’t even miss his Giants teammates, which seemed a little odd since they were coming off a third World Series title together.

After Sandoval’s comments, former Giants teammate Aubrey Huff had some words for the third baseman.

“I’m pretty sure their (sic) wasn’t a tear shed on behalf of all the players, and the coaches when he signed with Boston,” Huff’s Facebook post from earlier in the week read. “It has always been about Pablo. He had the fans fooled but not the players! One of the biggest reasons he didn’t want to come back is because the Giants made him workout on the treadmill every day! Pretty sure that was a driving force for him! Never the less [sic] he could have always been a legend in San Fran but ego always will come in to play when it comes to Pablo! Sorry for the rant just want to take up for the players who are there now holding their tongues, because they don’t want to get in the middle of this! If you can’t get along with guys like (Buster) Posey, (Madison) Bumgarner, (Matt) Cain, (Jeremy) Affeldt (sic), just to name a few, then maybe it’s time to look in the mirror! Rant over!”

Judging by the reaction from Giants fans in attendance, they don’t want him back, either. You can hear fans yelling “No!” and “Hell no!” with one fan motioning that he wants no part of Sandoval back in San Francisco. 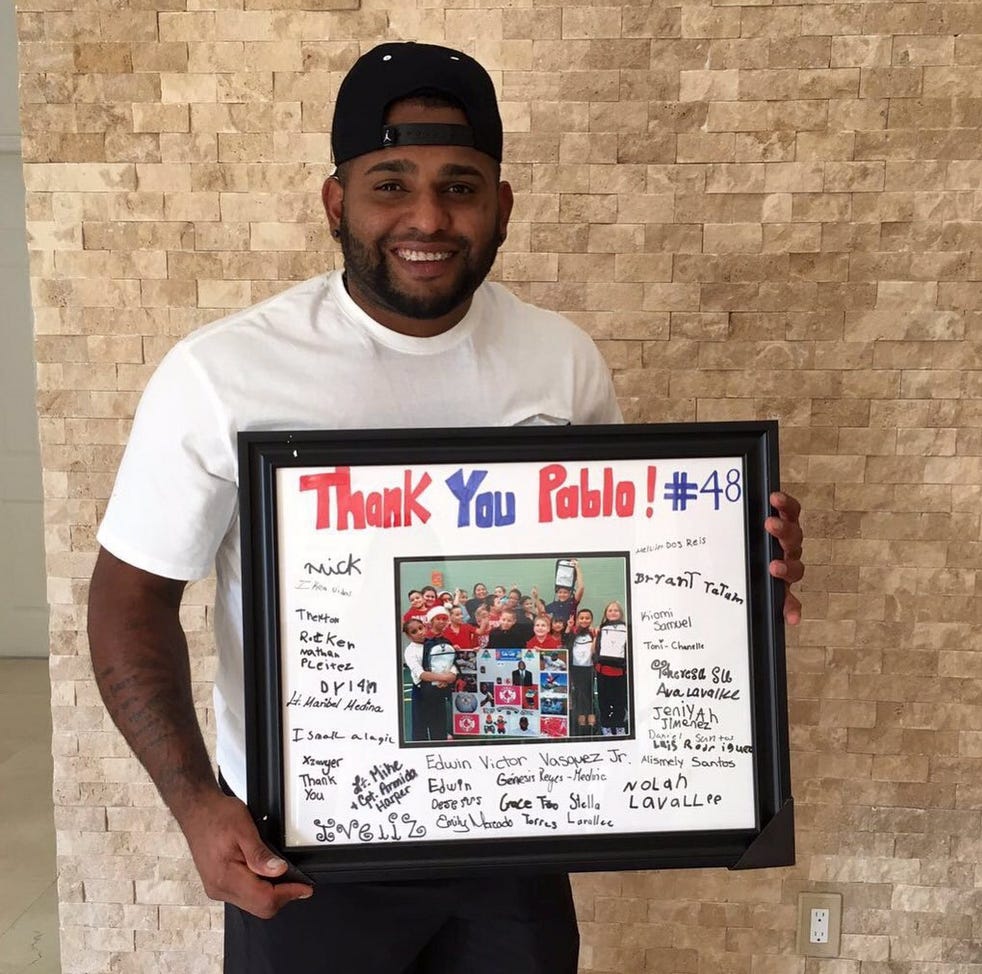 Sandoval posted a picture on Instagram last week, showing off a new, slim look. It’s clear that he’s been putting in work over the offseason to prove to Red Sox fans why Boston felt he was worth an investment just shy of $100 million. It’s clear that he’ll never live up to that contract, as he’s just not that kind of player. It’s not Sandoval’s fault that the Red Sox offered him that much money. But FanGraphs projects Sandoval to hit .278/.330/.435 next year, which is on par with what most would’ve expected from him before his forgettable 2015 season.

I think most fans are concerned with how his defense will rebound (especially with Hanley Ramirez digging out his throws at first base), which could’ve been attributed to pressure from a big new contract, adjusting to a new team, city and league, or, most importantly, his weight. It appears as if though he’s put in the work to address the weight issue, so hopefully having a year under his belt in Boston will help him perform in year two and beyond.