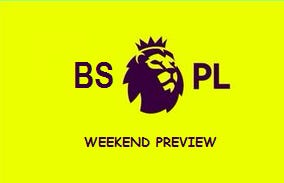 That’s going to be you after you realize how much jogo bonito fantástico is in store over the next few days, starting this weekend with some of the best games possible in England and Italy, and spilling over into the midweek when something that rhymes with Shmampions Shmeague drops a big steaming load of awesomeness directly onto our faces. Can’t wait.

Anyway, there was a lot going on in the soccer world this week, including:

- Saddened and frustrated by their inability to beat English competition, Arsenal are going to try their luck in America in late July

But enough about the past. Let’s take a look at what’s on deck this weekend… 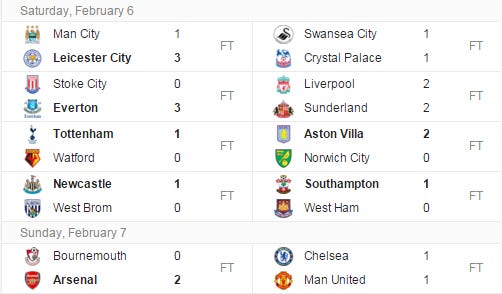 Robert Huth scored not one but TWO goals against City, but it was this play that killed the Sky Blues with fire:

One of the better – or at least more entertaining performances on the season for both Chelsea and United. Unfortunately the result was best-case scenario for everybody else.

Two-goal lead at Anfield against a crap team… what could possibly go wrong?

[On the other hand, not very classy of Sunderland fans to cheer for an admitted child molester, imho.]

Heading into this weekend, this is the current table: 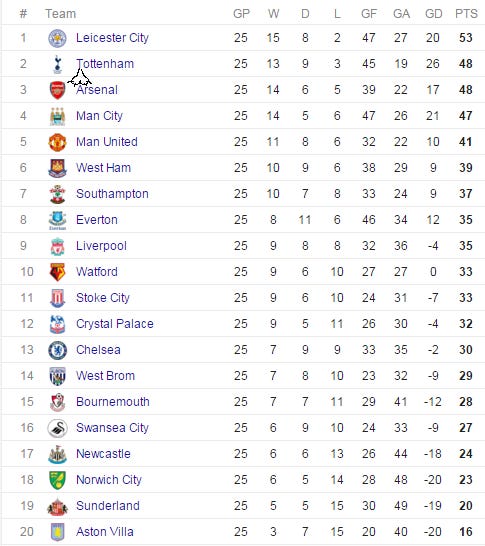 MIND THE GAP – and the dangly bits in your face

As for the games coming up this weekend, here’s what we got… 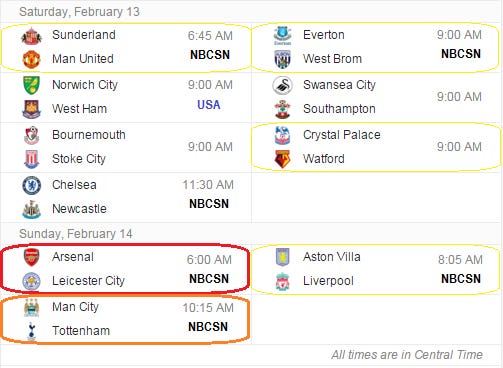 Biggest games of the weekend are both on Sunday, when the two Cinderella frontrunners travel to the big, bad, ugly, spoiled, big-spending behemoths-slash-former-(slash-future?-)favorites to win the league. Thus, the big question for the weekend is whether the underdogs can keep chugging along? 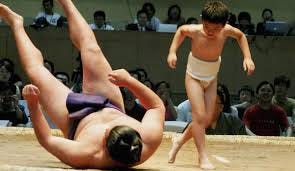 Or is this the matchday that the Goliaths stomp on the Davids’ dick? 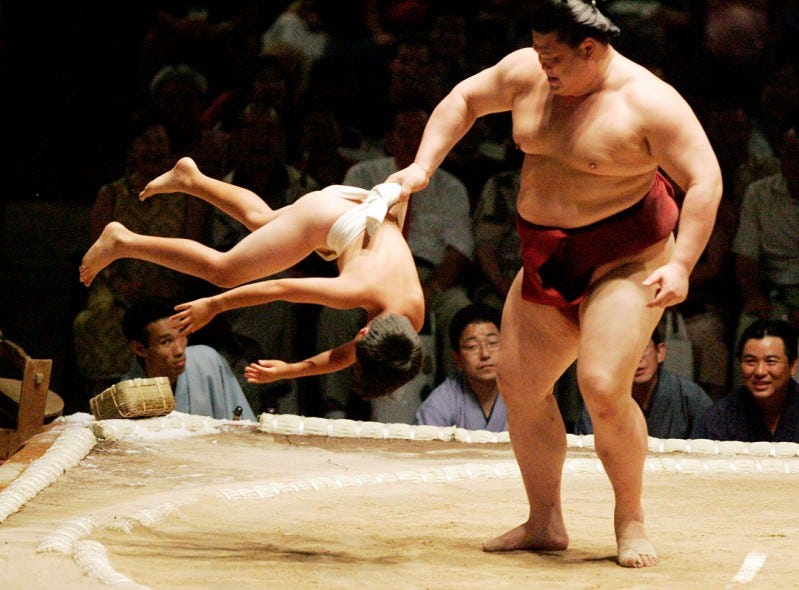 [Note: Prayers up for Left Coast fans of Arsenal, Leicester and just plain old high quality soccer… 4am kickoff on a Sunday morning does not sound like much fun.]

I just took out a second mortgage on my parents’ house, half of which has been earmarked for paying off my bookie after the last couple weeks… but the rest of my recent “windfall” is available and ready to be lost, so let’s go git it (back)!

No respect. No friggin’ respect. I wouldn’t blame Foxy fans one bit if they felt personally offended by their odds in this one. To be fair, Arsenal is one of only two clubs to beat Leicester so far this season, and they did it in dominating fashion at the King Power Stadium in September, and this time they have the added advantage of welcoming the Mighty Midgets to the Emirates.

My prediction on this game comes down to one player/dying giraffe: Per Mertesacker. The speed of Vardy, Mahrez, Okazaki and Co. (is it just me or does their list of world-beaters seem to get longer each week?) would literally make him retire from the sport by halftime if not sooner. If he is on the bench, the Gunners will take all three points. If he starts… I’m going with a 2-2 draw. If Bo Gangles is on the bench – where I assume he will be because Arsene Wenger is not a total maroon – Arsenal to win 3-1. (For the record, unlike last week when I picked against the Foxes and immediately hated it, there are zero doubts in my mind this time around. Some stories have fairytale endings, some stories end with dead fairies.) 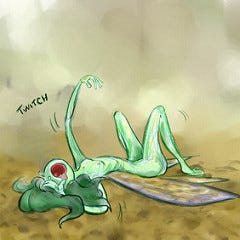 City lost to Spurs 4-1 at White Hart Lane earlier this season, and then were murdered in their own home last weekend. Facts are facts, the Sky Blues have zero chance this weekend, right? 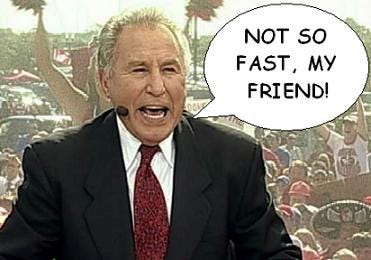 It’s at times like these were a pros/cons-type list can come in handy. So let’s take a look:

Reasons why Spurs will find a way to lose this game:
– Vincent Kompany is back
– Vertonghen is not back
– Sergio Aguero eats Tottenhams for breakfast
– They are Spurs
– VINCENT KOMPANY IS BACK

Reasons why Spurs may win this game:
– This year is different

Welp, shit. Five reasons > one reason… guess we have our answer. City to win 2-1. [Bonus bet: gotta love both clubs to score in this one.] 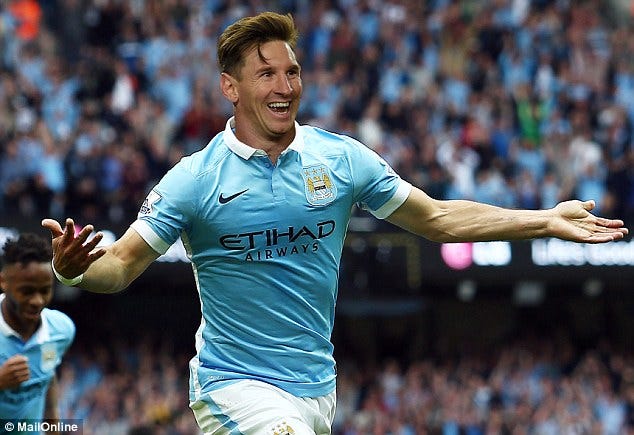 (Note: for those of you who actually want some explanation behind my rationale, and in case it wasn’t spelled out enough: City is a totally different club with Kompany in it. I’ll refraining from using the term “Lucky Leicester” because that would imply the Foxes haven’t earned their place atop the table, which they absolutely have, but things have also been falling into line for them – whether it be an frankly remarkable lack of injuries or games like last weekend when they caught City just before Kompany was fit again… lots skill + just enough luck = good things happen.)

• The award for smartest move of the weekend goes to the NBC execs who decided to put the Everton [-190] game on NBCSN, though unfortunately they are playing a tired West Brom [+570] squad that is coming off a dismal win over something called Peterborough in the FA Cup on Wednesday, which will absolutely have an impact on this one. LOCK OF THE WEEKEND: it may take a while but the Toffees will eventually find a way to break into the bus Pulis parked in front of net, move it out of the way, and score a couple goals. Everton to win 2-0.

• Crystal Palace [+120] is in free fall at the moment, and their diagnosis for the problem was to bring in Emmanuel Adebayor. Prognosis: death. Watford [+260] to win 2-1. 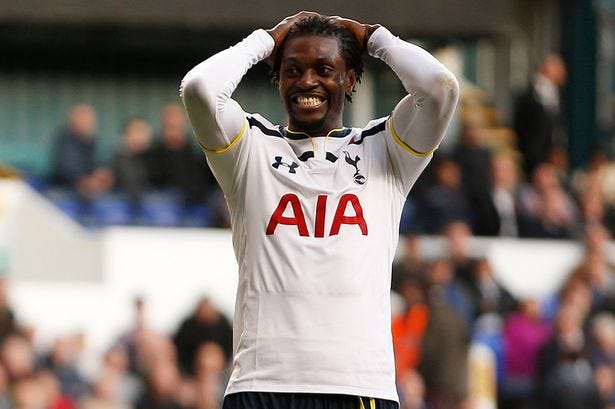 Expect a lot of this

• It’s all fun and games until Adam Johnson admits to banging a 13-year-old. Like it or not, without his marginally impressive free kick against Liverpool last weekend, Sunderland [+400] likely would have faded away quietly. This weekend they welcome an ever-so-slightly resurgent United [-133] to the Stadium of Light. If you are thinking to yourself tonight, “Hmmmm, should I wake up at the buttcrack of dawn to watch this game?” then my second strongest LOCK OF THE WEEKEND is: No. Sleep. But somehow, some way, United scrounge out a 1-0 win and LVG will live to lose another game.

Serie A: Some of you might recall I recommended watching NOTHING last week in this space… well this week is the polar opposite. 2nd place Juventus host leaders Napoli on Saturday (1:45pm CT on beIN Sports) and if you ain’t watching then we probably can’t be friends.

La Liga: 3rd place Real Madrid welcome 6th place Athletic Bilbao to their place of business on Saturday (9am CT on beIN Sports) so perhaps a little DVR action might be in order.

Bundesliga: Game of the weekend in Germany is actually today (Friday) when 4th place Schalke visit 7th place Mainz (on FS1). What, like you got something better to do?

So there you go, the best (and worst) weekend soccer preview you are liable to find on Barstool this week. THE CHAMMMMMMMMPIONNNNNNNNS is coming next week. Get pumped.

LA Galaxy’s 2015 playoffs in a nutshell