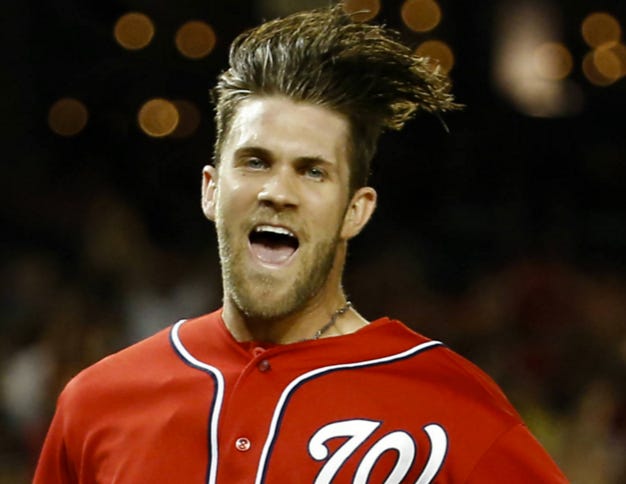 CBS - Many have speculated about how much money Bryce Harper of the Washington Nationals could make once he hits free agency after the 2018 season. Named NL MVP at the age of 22, he has the numbers and hardware to prove he is a generational talent, and will likely be paid as such if he continues to produce at the same level. Harper was asked during an interview with 106.7 The Fan’s Grant Paulsen and Danny Rouhier whether he has thought about the possible magnitude of his next contract.

“I was talking to an executive this offseason,” Paulsen said. “At one point in time they said you could be the first $400 million player. Do you ever think about your future and what’s possible, in terms of you could break records for the money you make at one point in time?” “Yeah, I mean I don’t really think about that stuff. I just try to play the years out and do everything I can to help my team win,” Harper said. “But don’t sell me short. That’s what you’re doing right now to me, so don’t do that.”

If you hear the audio, you can hear him laughing as he’s saying it. But at the same time he’s like 400 million, get that number the fuckkkk outta my face. 400 million is cool. But you know what’s cooler? 500 million. Just like I’ve been saying. Bryce doesn’t want to be the first 400 million dollar player, he wants a half of a billion dollars and he’s letting the world know right now. As nice as he is, as kind as he is, as good of a player, teammate, and clubhouse guy he is, he also knows how fucking special of a baseball player he is. He knows he’s a once in a generation type player. He knows not just anyone smashes records at 22 years old and has historical years. And though he probably regrets saying it on the radio, he certainly knows with his skill and Scott Boras’ ability to play teams against each other, his hair is going to be the first head of hair to sign a 500 million dollar deal. It’s just so much sexier than being a 400 million dollar guy.

For the record, I’m on record multiple places saying I think he goes to New York. I don’t think DC is completely ruled out, especially because the Lerner family is one of the richest families in the world. They will open their checkbook for Bryce, no doubt about it. Scott Boras is salivating at the idea of playing the Yankees and the Nats against each other. His free agency is going to be bigger than when LeBron took his talents to South Beach. But with 500 million dollars on the line and a whole lot less hatable.

PS: If you’re still a Bryce hater you are the biggest loser ever. The guy legitimately is what every sports fan wants on their team. Great player, great guy, plays the game hard as hell, never gets in trouble. It’s actually bizarre that the same people who bitch about how every player is a robot now, how all they do is give canned answers then bitch about Bryce. It’s probably more of the fact that just everyone is a complaining ass bitch these days, but good lord Bryce haters are just the lamest.