It’s starting to get to the point where this Bracketology will have drastic changes each week. This time around it was due to a postseason ban and of course some upsets. Again, the rules for coming up with a bracket are tedious where you can’t have the first 3 selections from a conference in the same bracket, no rematches in the first round and geography matters.

So, let’s take a minute to talk a little about version 2 of Barstool Bracketology. The closest call to me was what to do with Virginia and Xavier. As of right now I’m giving Xavier the last 2 spot over Virginia because of the sub-50 losses the Cavaliers currently have. With a backloaded ACC schedule, Virginia can jump Xavier into the No. 2 seed, with games against Duke, UNC, Miami and Louisville still. But, as of Feb. 12 you still have to take into consideration the terrible losses to Virginia Tech, Georgia Tech and George Washington.

Same goes for Maryland and Iowa, who will battle each other for a No. 1 seed as champion of the Big 10. The biggest problem with the Big 10 is an unbalanced schedule, where Maryland only gets one game against Iowa and Michigan State, hurting their chances for more impressive wins. Despite the loss on the road to Indiana, Iowa holds onto that No. 1 seed thanks to seven top-50 wins compared to 4 for Maryland. I expect this No. 1 seed to come down to the conference tournament.

Here’s a look at version 2 of Barstool Bracketology: 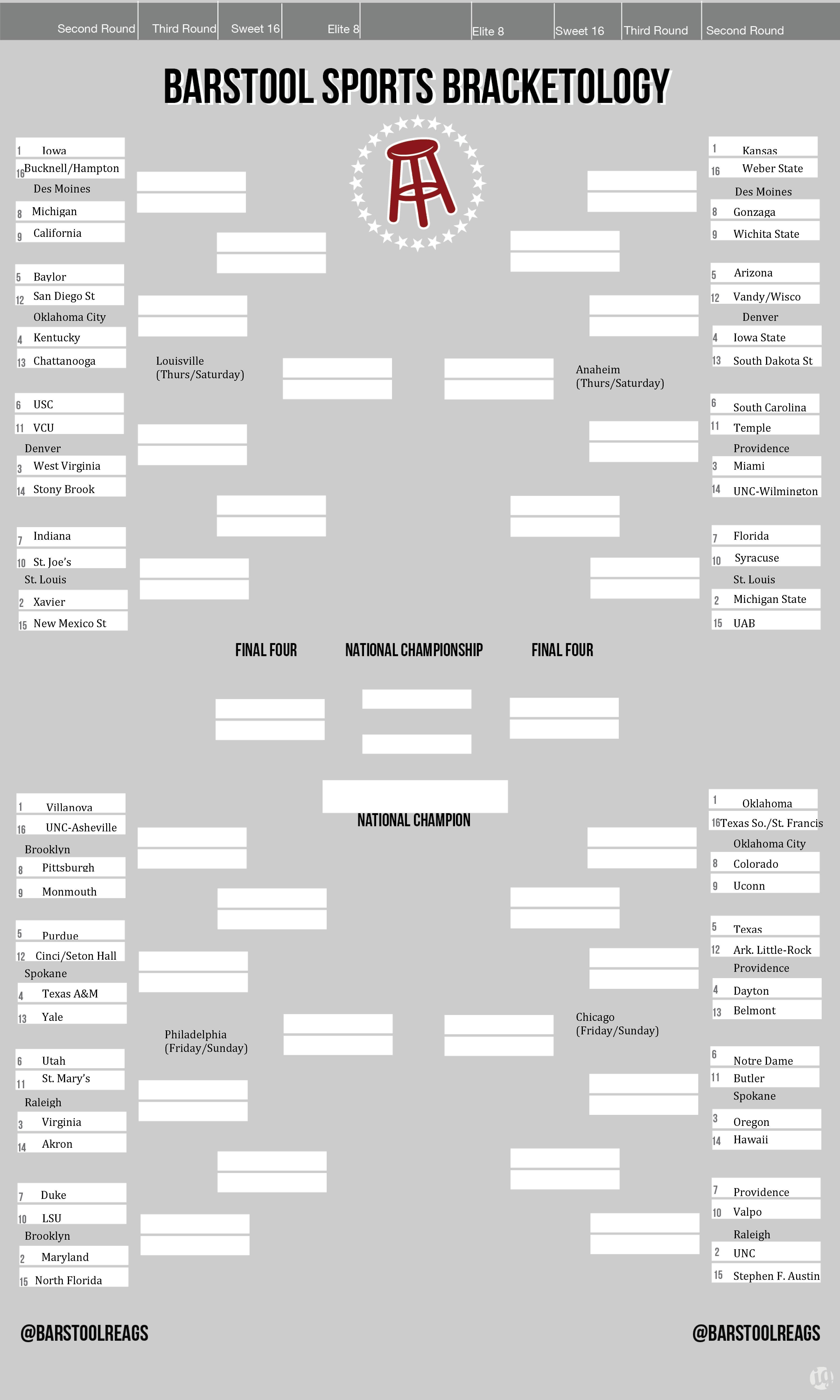 So, who is just missing the cut here? My first four out include Oregon State, George Washington, Washington and Alabama. If it sounds somewhat disgusting, that’s because the bubble is incredibly soft this year. There isn’t great talent of teams down around the last teams in or out, which means they better be hoping teams don’t steal bids come conference tournament time.

Games to watch over the weekend for movement is: Kentucky at South Carolina, UCLA at Arizona, Georgetown at Providence, Texas A&M at LSU, Purdue at Michigan, Kansas at Oklahoma, Xavier at Butler, Virginia at Duke, Wisconsin at Maryland and Texas at Iowa State.

The biggest thing to watch going forward for the top teams are the backloaded schedules. We touched on Virginia, but there are a ton of ACC teams that still have to go against other top teams. Xavier will likely have to win out, or suffer 1 loss and win the Big East Tournament to hold onto that No. 2 seed firmly. If it plays out with Xavier losing a couple of game, the Big 12 and ACC will likely take up 4 of the top 8 seeds when it’s all said and done.