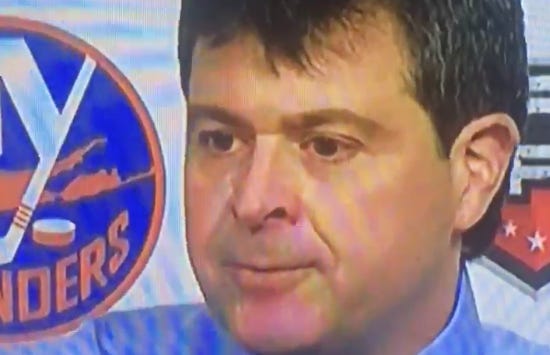 Beating a team like the Kings is normally a good thing.

Having Boychuk, Cizikas, Lee, and Tavares find the back of the net in the same night, plus a 180-foot empty netter from Hamonic seal the two points, is also a good thing.

Yet following the Isles‘ 3rd win in as many games it seems head coach Jack Capuano couldn’t find much good to talk about.

I can’t say for sure just who or what had Cappy so hot and bothered following what seemed like a quality win for an Isles club. One that has seen peaks and valleys since the start of the season in October.

The shade couldn’t have been aimed at the Captain. As Tavares played one of his best of the year. Creating chances, getting the puck on net, and finally showing glimpses of chemistry between Mikhail Grabovski and Ryan Strome; even tossing one of his prettiest of the year.

His 20th goal of the year. Making this the seventh time in Tavare’s [you guessed it] seven NHL seasons where he’s reached 20 goals.

On the back end, we saw Thomas Greiss [again] prove he can handle his own when the going gets tough, and can manage to keep his team within arm’s reach of a win at all times. Along with Jaro Halak, their combined .923 save percentage puts them as the second best tandem in the league. Life is easy when you have not one but two starting goalies.

16 goals in their last 3 games, with momentum building as the team heads into a rough second half of February, it’s hard to pinpoint where the coaches anger was directed at.

de Haan made a tough mistake that led to Clifford’s goal, but despite the fact was able to tack on another quality outing in what has been a good year for him. The powerplay has looked increasingly better over the last week.. finally listening to a certain blogger who preaches that Pucks On Net Life™ I assume.

Overall, we’re seeing an Isles team that is finally finding their legs within the first 10 minutes of games, and getting out to the hotter start Which, as last night proved, can win you games.

By the way, that empty netter from Hamonic? Allleeyyyy oooopppppppp!