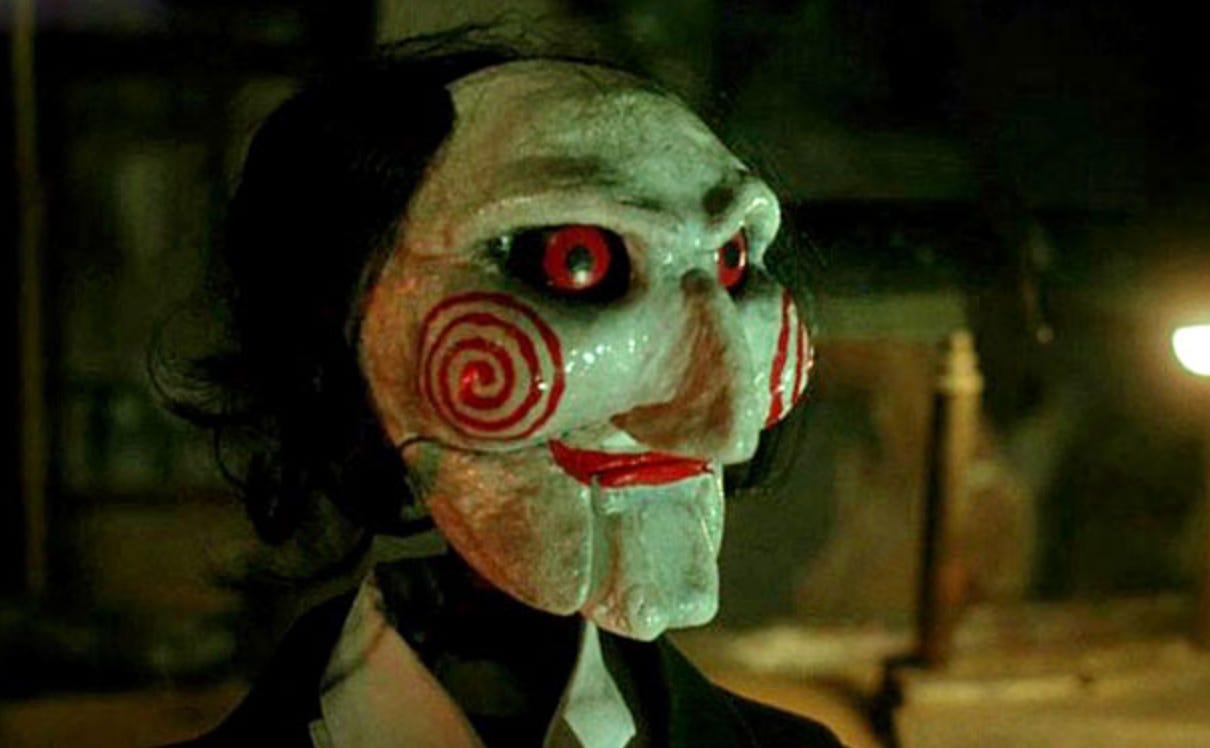 AVClub- When James Wan signed on to direct Furious 7, he brought the Fast And Furious franchise up to the same number of films as Saw, the much different, but no less absurd series he spawned in 2004. And now that the former is officially back for a final trilogy, it seems like Saw‘s producers may not be willing to let a bunch of juiced-up cars and dudes outpace their fun-loving torture films. Bloody Disgusting is reporting from an anonymous source that Lionsgate is bringing Saw back for an eighth movie, written by Josh Stolberg and Pete Goldfinger (Piranha 3D) and titled Saw: Legacy. Wan and Saw writer/co-creator Leigh Whannell will executive produce. If the news is true, it wouldn’t be altogether surprising, even though producers Mark Burg and Oren Koules’ attempt to bring the original back to theaters failed pretty spectacularly in 2014. Who wouldn‘t want to end the Saw series on a higher note than Saw 3D?

I gotta be honest, I was shocked when I read there had been 7 Saw movies. Seven! Is there anybody out there who has seen all 7 of them?  There can’t be. There just can’t be. No way those movies are any good after the first two. With that said, I’m kinda pumped for a new Saw movie. Sometimes all these things need is a little time to breathe and a new generation to emerge as its audience. It’s been 5 years since the last one (Saw 3D, that somehow made $136 million at the box office). Let’s not forget just how awesome and weird the first Saw was. I left the movie theater with my jaw on the floor after that movie. It was unlike anything I had ever seen before. It was a complete and total mind fuck. It was the dead guy in the middle the whole time! He was just laying there! Even Saw 2 was pretty good. That’s the one where a bunch of people are trapped in a house. The biggest problem was Saw 1 and 2 spawned a whole new genre of horror movies and it all just became white noise. Nothing was shocking anymore.

All I’m saying is I think the world is ready for another Saw. We’re far enough away form the originals now. I’m ready to watch people get caught in horrifying situations. Situations where they’re forced to saw off their own foot or crawl through barbed wire or get thrown into a pit of needles or have their head put into some weird spiked contraption that closes on their head. Saw movies activated an entertainment part in my brain that I’m not proud of but I feel like I wanna scratch that itch again. Let’s do this. Let’s roll out that scary-as-shit little clown on his little scary-as-shit little bicycle and get weird.

Alright fine, if this new Saw happens it’s gonna suck and nobody will go see it, but I might. So there.