[Coloradoan] With the game tied at 84-84, Colorado State University senior guard Antwan Scott attempted a 3-pointer that was off the mark, the rebound caromed toward midcourt, and as Rams‘ junior John Gillon tried to go for the loose ball, he was called for a backcourt violation with 0.8 seconds remaining in the first overtime.

By rule, 0.4 seconds or more are required to be on the clock to get off a catch-and-shoot (anything less must be a tip-in); so the Broncos had plenty of time to get a shot off, and it looked like they did and should have won the game.

Boise State’s Anthony Drmic threw the ball in to James Webb III, who took one step, turned and heaved an off-balanced 3-pointer that banked in and appeared to have given the Broncos’ the win. Video replay shows the ball is out of Webb’s hands with 0.4 seconds showing, but the game wasn’t over.

The officiating crew of Tom O’Neill, Verne Harris and Dave Hall went to the monitor to make sure the clock started on time. I asked O’Niell what the ruling was, and he said they timed the play with a stopwatch and determined it took 1.4 seconds. The game went to a second overtime, where the Rams won 97-93.

Even CSU coach Larry Eustachy said, at first, he thought the Rams had lost and was ready to walk his team off the court.

“I knew when it banks and the clock went off, it had to take longer than .8 seconds, but I thought we lost. That’s the bottom line,” Eustachy said. “I said ‘here we go, the same old story against Boise.’ And I was waiting for the refs to just run off; the game is over. It took a lot of courage to figure out the right call and clearly when he got it to when he got it off, it took 1.3 seconds.” 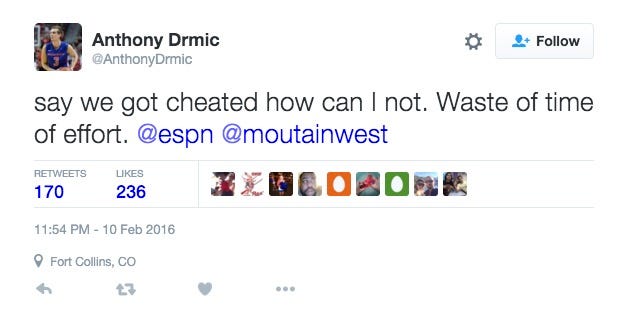 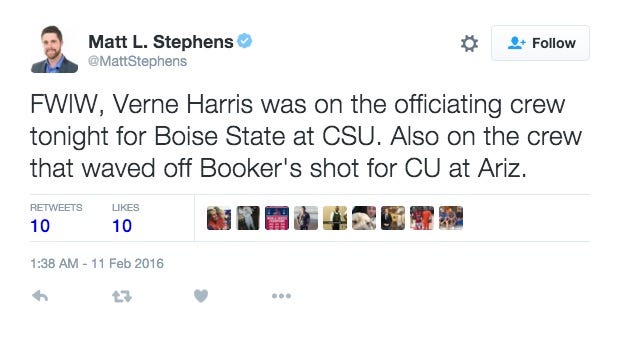 Hilarious. Well, not for Boise State. Hilarious that it’s 2016, sports are this bajillion dollar industry, billions of people watch them on their super HD TVs with 9,000 different angles of slow motion replays, and we still can’t figure out things like, what’s a catch. Was the runner safe or out. Did he get the shot off in time. Refs pulling stopwatches out of their pockets to time buzzer beater shots – and coming up with results that no other person with eyeballs could possibly explain.

It’s hard to understand how this was the right call, and for the Mountain West, it marks the second controversial ending in the past week. Saturday at San Diego State, New Mexico was likely cost a victory because of an incorrect call made by officials.