We’ve done it. We have found the world’s dumbest person. Sheila, you are so goddam stupid it’s incredible. And I don’t mean to that to be an insult, more of a statement of fact. She is legitimately the dumbest human being on the planet. How many more times do you think she would have said Nana? 15? 20? Sheila is so dumb Steve Harvey turned on her. And Steve Harvey LOVES black people. Steve got so in-your-face black with the song and dance and he did a 15 minute stand-up comedy set right there on the stage about how dumb Sheila is. And then walked back to Sheila, and then continued to make fun of her to her face. Not because he wanted to, but because 1) she deserved it, and 2) she didn’t even understand what was happening.

I love Steve here though, realizing Sheila is dumber than a rock and continuing to give her chances to say literally anything else, fully knowing she wouldn’t. Steve completely breaking with the “let’s just flip this shit over” is the stuff game show moments are made of. Fucking Sheila. Probably still has no idea what happened. She legit didn’t understand that she had to guess words that weren’t already guessed, she just thought Steve Harvey wanted a list of her own answers. Not sure how you get on Family Feud and not have a fundamental understanding of the game, but that’s Sheila for you.

Sam Alaska who sent me this said it very well – Harvey needed a pick-me-up and this was exactly it. Some lady who is even dumber than he is. This was worse than Dennis’ fast money performance in Always Sunny but this fiasco actually happened right there on network TV.

Meanwhile the white family on the other side playing for keeps, throwing X’s in the air like they just don’t care. 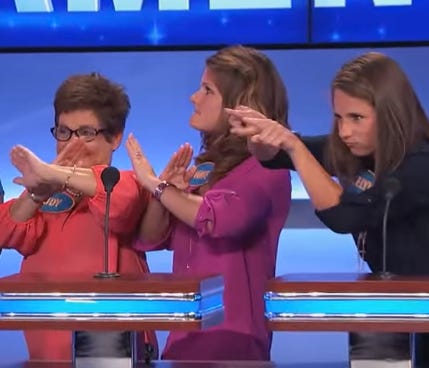 No wonder Sheila fucked it up, how can you focus with those bad bitches breathing down your neck?