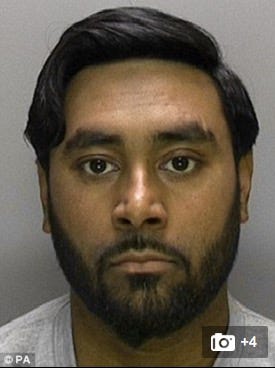 Daily Mail – A British man who travelled to Syria to join ISIS but returned home because he disliked the ‘cold water’, ‘bland food’ and ‘doing absolutely jack’ has been jailed for seven years.

Mohammed Uddin, 29, a security guard from Barking in Essex, was sentenced at Woolwich Crown Court after pleading guilty to a charge of preparing acts of terrorism. The court heard how Uddin – who referred to himself as ‘Supaman’ – travelled to the war-torn region on November 4 intending to join ISIS and fighting for them.

On December 12, he crossed the border back into Turkey where he was held by the authorities because he did not have any travel documents. He was stopped by counter terrorism officers at Gatwick Airport when he returned to Britain on December 22, who believed he was involved in terrorist-related activity and found extremist material in his possession.

Uddin, who had earlier boasted it was ‘p*** easy’ to cross the border from Turkey into Syria, quickly became disillusioned with life in the Middle East.

He was in touch with a friend in Britain who had been ready to join him when police raided his home in Bedford.

Less than two weeks after he left Britain, Uddin messaged his friend saying: ‘Lol bro, it’s soo easy to get in man, especially during the day, alhamdulillah, we walked in, no running bro. Don’t worry inshallah, don’t stress about getting in here. It’s p*** easy [sic]’.

Classic bitch ass terrorist move. Talk all big and bad on your anonymous Twitter account, change your handle to SUPAMAN and brag about battling the infidels, get swept away in all the slickly produced glamorous propaganda videos. Then give up after a few months because you’re cold and bored. Food was kind of bland. Lacked seasoning. Not enough Michelin Star restaurants in Syria with exciting inventive meals for him to Instagram. Then the cherry on top, brag about how it’s pissy easy to cross the border, then promptly get arrested trying to cross it. What an uplifting story to wake up to. Fuck this guy.

Dude texts like a 14 year old teenage girl too (with a heavy ISIS influence).

He went on: ‘When u cross over, the mens maqqa [residence] is shared and tough man, especially with this weather. I wud recommend good trainers u can wear/take off [sic].

‘Keep your thermals close buy too. Trust me, u will be thankful. I suggest u prepare urself by using cold water for everything too and be ready for stinky shared toilets, not clean lol [laughs out loud].

‘U need to get used to the cold water and no electricity. Everyday use cold water, u will probably get your first shower when u get to your mudhafa [annex]. The house u stay in before the muaskar [training camp]. It’s tough bro lol, A LOT of patience is required [sic].

‘Start eating small amounts of food to get used to it, because u will be sharing your food as soon as u arrive. Bland food btw lol, inshallah it will be better when u get to mudhafa. Also u need to decide where u wana get placed. Alhamdulillah. I chose Halab [Aleppo]. We’re placed in Menbej, small town, no action, just normal life alhamdulillah [sic].’

The wannabe terrorist also complained how he could not get to the ISIS stronghold of Raqqa as there was ‘high demand and not enough places’.

He added: ‘If ur planning on going to Raqqa as a singleton FORGET it [sic]’.

In response to that, his friend inquired as to where the best place to go was, adding: ‘Esp where I can get istishadi [martyrdom] quick time…Wallah [I swear], it’s my dream [sic].’

By this time, Uddin had grown disillusioned with life in Syria and told him: ‘I wanna get out of here now. I’ve had enuff. Lol, this isn’t the jihad or system we thought we’d like to see [sic].’

On November 19, the man asked Uddin: ‘So wat u up 2 in Sham? Just munchin, toileting and sleeping, lol?’