I can’t tell if this video is real or staged? It seems kind of real, some of those girls seem pretty sincerely disgusted and agitated by Triumph and the others appeared to be doing the “he’s being mean but smile and it’ll be fine” thing but why wouldn’t they just walk out? That’s, like, the main thing for these people, right? “You’re saying something I don’t like so I’m not listening.” Sitting there for ten minutes and taking it on the chin without organizing a protest seems suspiciously out of character. The oversensitive crowd is not exactly the types to let a puppet dog come into their safe space and fuck a knee, are they?

Nonetheless, whether real or fake, funny video that puts the “safe space” culture rightfully on blast. Just wish they gave the big man some time on the mic. 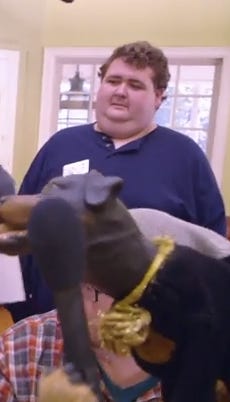 Would love to know where his minds at. Because listen here, big fella, if you’re gonna look like a Garbage Pail kid you cannot be a “safe space” person. You seriously can’t. You’ve gotta be the fat, fun guy that everyone loves hanging around and just own it. So your two options in life are hit the gym hard, or head to a frat house that just had their “Landfill” graduate (every frat house has a “Landfill”). That’s the most valuable advice you’ll ever receive.