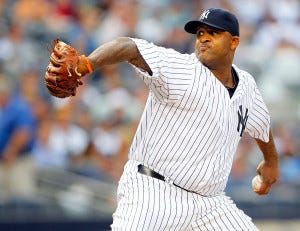 Post – His right knee has a lot of miles on it and sobriety is a lifelong battle, but when pitchers and catchers arrive in Tampa next week they will be greeted by CC Sabathia, who is encouraged how the hinge feels and stronger mentally after a monthlong stint at a rehab facility in October to battle a booze problem.

“I feel the best I have in three years. I am excited to get to Tampa with a clear head and a healthy body,’’ Sabathia texted The Post Tuesday after a workout in a North Jersey gym. Sabathia, who was throwing in Florida, is spending this week in New Jersey and will leave for Tampa early next week.

Every year we read about how every player is in the “best shape of their life” so expect a ton of that coming out of Yankees camp. It’s normally older players we hear this about the most, and The Yankees have a boat load of those. Sometimes it’s true, like Tex before his injury, but what really matters is how long they can keep that shape. For CC it’s now more then a physical issue but a mental situation as well because of the ongoing battle with sobriety. However, being sober puts him in a position to regain some of his old form.

At the end of last season I wrote about CC opening up about his problems. When he did that, CC said he had been an alcoholic since the end of the 2012 season so hearing that he feels his best in 3 years makes total sense. Think about the last time you woke up on a Saturday or Sunday without drinking the night before. Now imagine that was your everyday for the last 5 months after waking up hungover for 3 years. When you’re sober, you go for a walk and get some chores done, but for CC he can prove that he can still take the ball every 5 days and put up a quality start.

Yeah CC is older and his weight has gone up and down like a cheerleader on prom night but when you look at the stats of the last 3 years alone, CC being sober should mean he can contribute. He won’t be the ace again but if you combine his sobriety with the things he pieced together at the end of the season he’ll make this rotation and be a leader on and off the field.