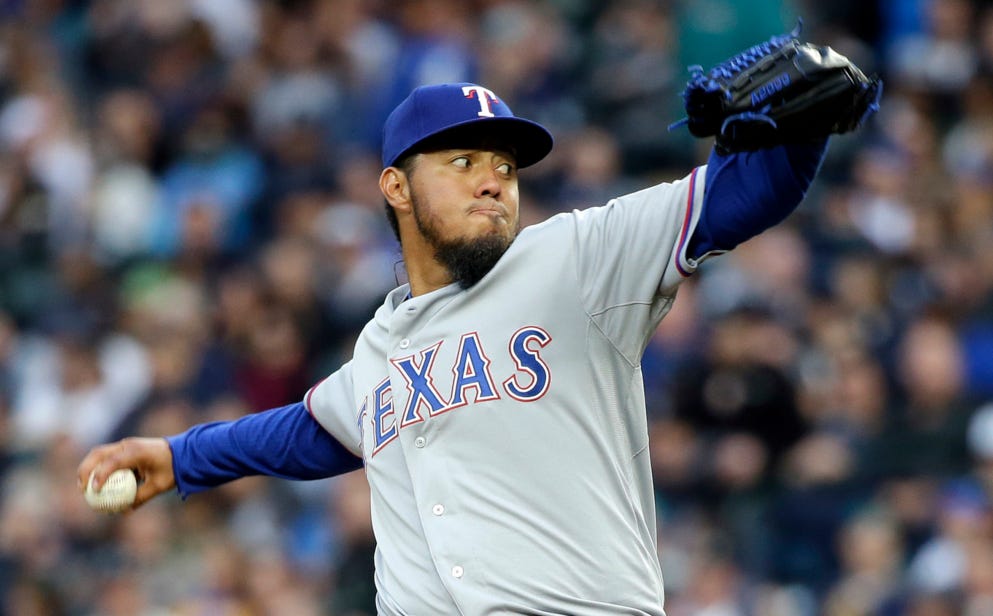 So there we have it. Dan Duquette finally went out and signed a starter to boost that abortion of a rotation. Gallardo isn’t the standout ace that the O’s have desperately needed for almost two decades, but he’s still an addition that needed to be made. Throughout the season there was a lot of griping in Baltimore about the departure of Cruz and Markakis, but their absence had substantially no effect on the offense. In fact, the 81-win 2015 O’s outscored the 93-win 2014 O’s by 8 runs thanks to a great year by Davis and progress by youngsters Machado and Schoop. Point being, the difference between being a .500 team and being the ALCS had everything to do with the entire rotation being garbage. The whole rotation performed below expectations outside of Wei-Yin Chen. And with Chen leaving, Dan had to bring somebody in and Gallardo is that guy.

So who is Yovani Gallardo? Well he’s not exactly a thrilling pitcher. He’s made one all-star team and finished in the top 10 in Cy Young voting another year, but he’s never been a dominant pitcher. But he still brings assets to the table that fits well within Duquette’s budget and what the rotation needs, which is durability and consistency. After an ACL reconstruction in 2008, he’s logged 30+ starts and 180+ innings every single year, and has only been above a 4.00 ERA once (and never in FIP if that’s your thing, which it should given the O’s top 5 defense). That’s 7 years of good, dependable starting pitching.

In an era where Tommy John surgeries are the norm and not the exception, Gallardo has been able to avoid to avoid the needle with a smooth, straight over-the-top delivery. This delivery helps him pound his low-90’s fastball low in the zone without putting a ton of strain on a relatively small (for a RHP) 6’2″ frame. He’s able to mix both a 4-seamer and a 2-seamer on both sides of the plate, and complements them with a hard mid/upper 80’s slider and power curve in the upper 70’s. Below, you’ll see him show off that inside fastball and fool Hanley Ramirez with a hammer

Now that doesn’t mean he’s without red flags. He would’ve been off the market weeks ago if he didn’t. The most glaring red flag is his declining strikeout rate. After averaging a K/9 above 9.0 in his first 6 years, he’s seen his rate drop in each of the 3 years since, falling all the way to a 5.9 in 2015. The interesting part is that the rest of his numbers haven’t taken the hit usually associated with a declining K/9 rate. His WHIP was a career high at an alarming 1.42 last year, but he also pitched to a career low 3.42 ERA, so you can call that a wash. His stats the two years prior didn’t decline either. So what that says to me is that he’s adjusted his mentality on the mound. He doesn’t go out there and try to produce swings and misses like he did early in his career. Whether or not that mentality translates over to Camden Yards and into his early 30’s is yet to to be seen, but that’s why he’s not getting a 5 yr/$80M deal like Chen and Mike Leake did. You get what you pay for, and we’re paying less to take on a pitcher with more risk.

The biggest downside is that the O’s have to forfeit the 14th overall pick to sign Gallardo. While that’s not ideal, I’m not gonna sit here and act like the O’s were gonna draft a pitcher that would’ve worked out anyway. Probably just another flamethrowing high school destined for a life of platelet rich plasma injections and TJ surgeries. Gallardo is a known commodity and a pretty direct plug for Chen as their projected 2016 seasons are nearly identical. With Davis re-signed, Trumbo replacing Pearce, and this Gallardo signing, I’d say the O’s have pretty much covered their bases for what they’ve lost this offseason, and added Hyun-soo Kim while they were at it. And now that they’ve conceded their 1st round pick, they might as well give up their 2nd-rounder too and sign Dexter Fowler. Guy’s an OBP machine that would fit perfectly in the leadoff spot. I think with that addition, all the rotation would have to do is perform somewhere between their 2014 and 2015 numbers for this team to contend again. The offense, the defense, the bullpen are all top 5 in baseball. The rotation just needs to be average in 2016 and signing Gallardo was a solid step in that direction.

PS: Just a fun fact to close this thing out, he can swing the stick quite a bit. Once hit a jack off Randy Johnson, ever heard of him? Guy’s a regular old Jeff Reboulet