I’m really hoping someone uploads the entire thing because this 6 minutes doesn’t even come close to doing it justice. Daniel reflected on his career, the passing of his father, Connor, making Brie scream yes, and how grateful he was to be able to wrestle for his entire life. Even people last night who don’t usually watch wrestling who flipped it on to watch were moved by his sincerity, humbleness, and overall demeanor. Need all 20 minutes of it to be uploaded, no idea why they cut it down to 6 to upload it onto YouTube.

Daniel Bryan is the epitome of the underdog who worked his way up. 5’8, 180 pounds- was never supposed to be the top guy. But he became such a good wrestler and such a good entertainer that he won over the crowds everywhere he went. He’s so good that he somehow made Kane into an entertaining, comedic character. And then once DB invented the YES! chant, the sky was the limit. It was that missing piece to the Daniel Bryan puzzle, culminating in the fans getting behind him and forcing the WWE’s hand, leading to this moment: 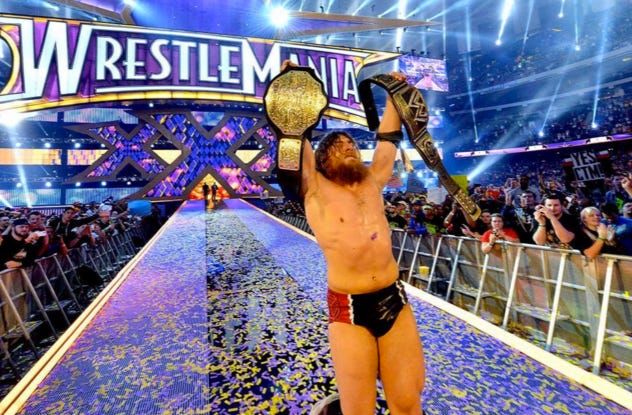 There’s really nothing not to like about him. Now’s all we can do is hope his brain isn’t completely mashed potatoes and he can live a comfortable life popping out babies with Brie. Daniel is a true class act and hopefully WWE realizes an organic, crowd-built push like Daniel’s will always be better than a fake, “let us ram him down your throat” push like Reigns’. There is not one guy on the current WWE roster who gets reactions like Daniel. Nobody is even in the same ballpark. Or on the same planet.