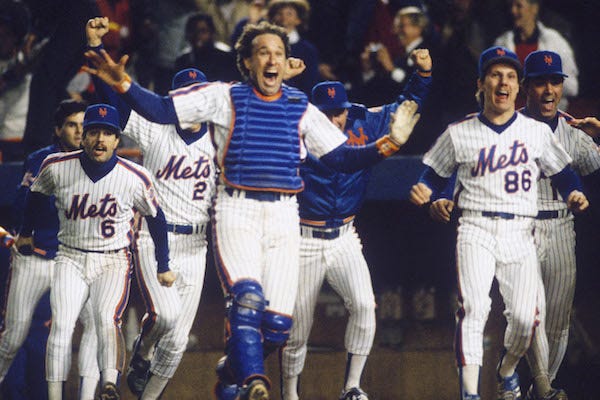 ESPN- The New York Mets will honor their 1986 team on May 28 as part of a weekend of festivities marking the 30th anniversary of the organization’s last championship.  The celebration will last the entire year, though. That includes the Mets wearing the distinctive 1986 uniform multiple times during the season as an alternate uniform.  The ’86 uniforms included a vertical blue stripe sandwiched between two orange stripes down the sides of the jersey and pants.

As for the May 28 celebration, manager Davey Johnson, the coaches and players all have been invited back for a 6:30 p.m. ET ceremony before the Memorial Day weekend game against the Los Angeles Dodgers.  The Mets also will have a pair of weekend giveaways as part of a three-day celebration. Fans attending the May 27 game will receive an ’86-themed T-shirt. And the first 15,000 fans attending the May 29 game will receive an ’86 championship replica ring. That game will begin at 8:08 p.m. ET and be televised as part of ESPN’s Sunday Night Baseball.

I thought watching the best rotation in baseball and what should be at least a good lineup this season was going to be fun.  But I didn’t realize we were also going to pay homage to one of the best uniforms/teams/collection of personalities in baseball history.  Now I just need the Mets to summon the soul of that 86 team this season.  Domination on the field, talk shit off it, and just not give a fuck no matter where they are.  Yo hacking butts like Keith used to.  David Wright beaming the 10,000 watt smile like The Kid (RIP).  And the bullpen recreating The Scum Bunch.  Just a collection of guys acting like animals, with Hansel Robles obviously acting as the Doug Sisk ringleader.  You get a hot foot!  You get a hot foot!  Cake fights and steak shoes errrrywhere.  And cocaine usage?  Actually, absolutely ZERO cocaine usage this year.  We already lost two potential Hall of Fame careers because of that shit.

I am also stoked to see those fire uniforms back on the field.  Especially Big Sexy rocking the racing stripe jersey with no buttons and breaking the Internet with whatever crazy gif and Vine he unleashes on the world.

By the way, if you don’t understand some of those references, you absolutely must buy The Bad Guys Won, which is obviously about the 1986 Mets.  Maybe the most entertaining book I’ve ever read and you absolutely do not need to be a Mets fan to enjoy it.  That team was just a bunch of pirates acting like complete lunatics in the 80s, which was basically the wild west.