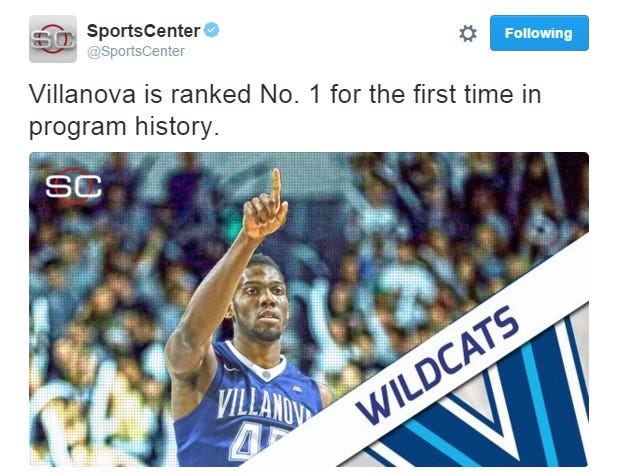 USA Today - College men’s basketball seems wide open this season, and the latest USA TODAY Sports coaches poll proves it. Seven teams earned first-place votes in the poll released Monday: Villanova (11), Maryland (11), Oklahoma (3), Iowa (3), Kansas (2), North Carolina (1) and Michigan State (1). At the top are the Villanova Wildcats, who are No. 1 for the first time since USA TODAY took over the coaches poll before the 1991-92 season. Villanova (20-3) holds a narrow advantage on No. 2 Maryland, four points, and each team earned 11 first-place votes.

Maybe Jay Wright can avoid impregnating those college coeds once every semester and lead this team to the Sweet 16!

If the elitist Villanova fans can get over that joke (Spoiler alert: They won’t), let me just say I’m officially on the Wildcat bandwagon from here on out. I have no real allegiance to any Big 5 or local squad, so I usually root for whoever has a shot do rattle some cages for Philly. I’m fine with whipping out the old t-shirt given at Steve Lappas’s summer basketball camp and getting behind the team. Me, Kerry Kittles, and Piccalo Girl will see you at the top, baby!

Seriously though, Jay & Co., it’s a weak field this year. Let’s get a little Final Four for the kids of the Delaware Valley. We need something. Anything.