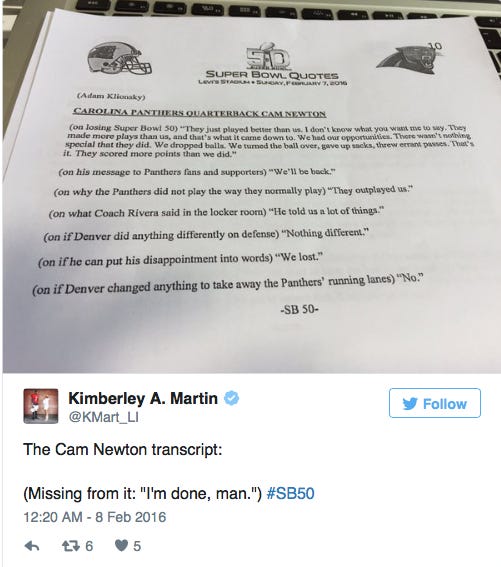 I’m not taking anything away from Denver’s Defense, I’ve actually been a fan of that unit for the entire season, but this is how it works in the Super Bowl, the story lines coming into the game, Peyton’s last stand, the ascension of Cam Newton and the cockiness of the Panthers, continue afterwards. So of course today is in large part about Cam Newton. The post game press conference and the word “class” getting thrown around left and right. There is no doubt he could have handled his post game press conference better, especially when you consider the attention he got every time he won this year, but what exactly do you want a guy to do when reporters are asking him the same dumb question over and over. Hey Cam are you disappointed, did you forget Defense wins Championship, did they do anything special to beat you? Um yeah dude, it sucks and I just lost the fucking Super Bowl. Again, Cam should have realized this press conference would be under a pretty intense microscope, especially with how the entire season went, but I don’t need canned responses from my athletes. Guy just lost the Super Bowl and the questions were stupid, maybe pretend to engage a little more but at the end of the day a press conference never will be that important to me as a fan. It’s not like Cam snubbed the Broncos in the handshake line or threw his helmet at a fan. In the long term I really don’t give a fuck about this.

What I do care about though was this play. This play to me still makes no sense in my brain.

Cam Newton, down only 1 touchdown in the 4th quarter of the Super Bowl making business decisions and not jumping into the pile to recover his own fumble. If you want to be upset at Cam that’s where your anger should lie, on the field. Not getting your nose into the pile for a loose football in the 4th quarter of a Super Bowl is fucking insane. That’s the moment, that’s it right there. 2nd quarter of a Week 3 game, I can live with my quarterback saving his body, not jumping into piles, not making post interception tackles, but the end of the Super Bowl? Makes no sense. So if I’m a Panther fan or a guy who is obsessed with Cam Newton it’s the fumble that pisses me off this morning, not that stupid press conference. Press Conferences come and go, the actual play on the field is what should matter.

This is why I’m #Done with Rob Lowe. Such a turd. Just like Peyton! Because Peyton is such a fucking awesome role model himself, Rob.