Quick game summary – huge two road points. Keith Yandle was a stud eating up Ryan McDonagh’s minutes & buried a laser with 12 seconds left to send this game to OT. After an exciting 3-on-3, Zuccarello absolutely undressed Stevev Mason before Stepan put the game away. If THIS isn’t the start of momentum after the MIN W I don’t know what is.

The big story though is the McDonagh/Simmonds incident. Let me just make one thing clear. Ryan McDonagh 100% cross-checked Simmonds high & that’s 100% a penalty, accidental or not. I’m not debating McDonagh’s innocence but his intent. There’s just a big difference between extending your arms to brace yourself for a late hit while upright against the boards compared to dropping a guy with a left hook. If you think McDonagh saw Simmonds and said “hey I’m gonna tattoo Bauer on his face” then stop reading.
Simmonds might’ve been pissed about an earlier hit from Kreider or a butt-end he took after that. Fair enough. So he saw an opportunity to light up the Rangers captain. Also fair. That’s hockey. The hit was clearly late though. McDonagh had gotten rid of the puck well before Simmonds cut back towards #27 to initiate contact. 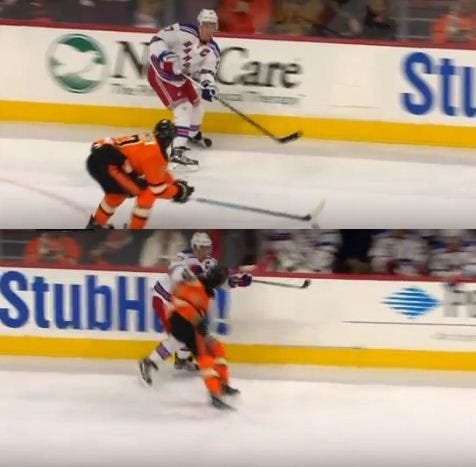 Should McDonagh have been a little smarter & assume a banger like Simmonds was gonna take a run at him? Probably. But he didn’t. He stood upright against the boards & then saw the Wayne Train coming so he extended his arms to protect himself. Ended up cross-checking Simmonds in the head which is a penalty, but there was no intent here: 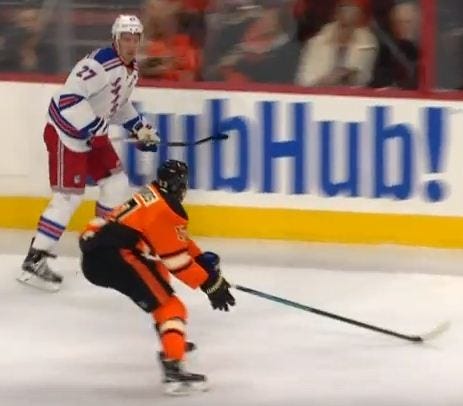 Or here when he realizes a guy ahead of him in the play is cutting back to blast him: 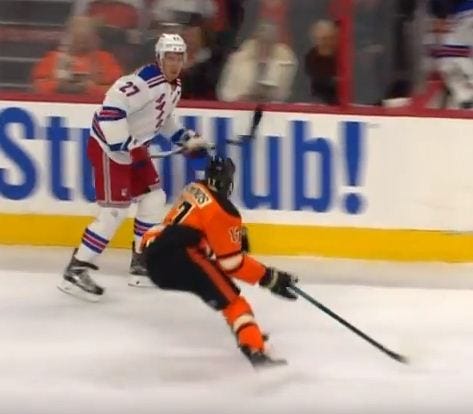 So he puts his hands up – he doesn’t throw his body behind the cross-check towards Simmonds to show intent. McDonagh is clearly just bracing himself as Simmonds drops low to explode: 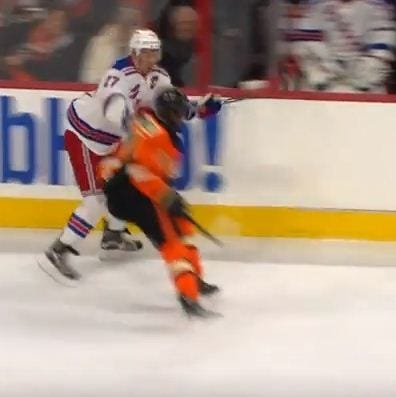 So Simmonds ate a stick trying to send a message & gets even more mad. Slashes McDonagh, then drops him with a left out of nowhere. Philly fans said McD “took a dive”. Mac Truck really sold the shit out of it sitting out the rest of the game then. Glass jaw or not, the only intent in this incident was Simmonds lining up McDonagh late (which I don’t have a problem with – I wish the Rangers threw their body around more & gave opponents something to worry about) & the left hook. The left, by rule, is an automatic match penalty & game misconduct for “punching an unsuspecting player”. Same exact scenario as what Lucic was suspended a game for a couple weeks ago.

So I don’t know what the big debate is. Simmonds got carried away & was tossed by rule. McDonagh got banged for the high-stick/cross-check (and got a bonus two for Simmonds’ slash on him). Again, if you think the Rangers captain intentionally threw his stick into Simmonds’ head like there was a bullseye on it then you’re just not using your eyeballs. In the heat of the moment I get any player getting pissed regardless – but that doesn’t mean a sucker punch isn’t a sucker punch. Let’s just hope McDonagh’s bell isn’t too rung & he doesn’t miss much time.