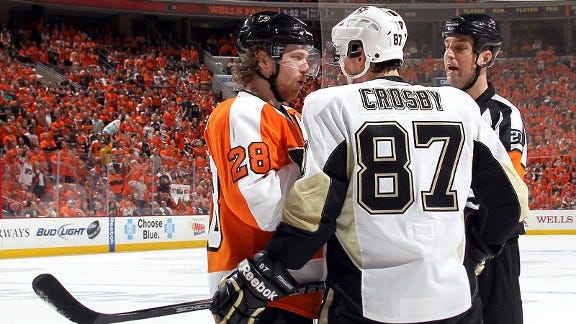 ESPN – Although plans for next year’s Winter Classic remain fluid, what does seem to be virtually locked in is an outdoor game between the Pittsburgh Penguins and the Philadelphia Flyers sometime in 2017.

The unresolved question is whether the game, likely to be held at Heinz Field in Pittsburgh, will stand as the 2017 Winter Classic or part of the Stadium Series held a few weeks later, a source familiar with the proceedings told ESPN.com

It seems that every year since the invention of the Winter Classic, there have been rumors swirling around about the Flyers playing the Penguins in an outdoor game at Beaver Stadium for the Battle of Pennsylvania. And every year there’s more excuses after excuses that come along with that rumor. Something straight out of the playbook of Davey Pageviews. “Oh, we need to wait for Joe Pa to finally die before it can happen”, then Joe Pa finally dies and it’s “Oh, something something something about Penn State having to get their liquor license and you’d have a better time trying to become an astronaut than trying to get your liquor license in Pennsylvania”. Excuse after excuse after excuse, which is why I actually believe this report. Because it appears the Flyers will play the Penguins at Heinz Field next year, not Beaver Stadium, and then possibly again here in Philly in 2018 as a home-and-home series.

Obviously I don’t need to list all the reasons why an outdoor game between these two makes sense. Next year will be each team’s 50th anniversary season and outside of the Boston/Montreal rivalry, the Battle of Pennsylvania has the most bad blood involved.  The coaches hate each other. The players hate each other. The fans hate each other. The concession stand employees hate each other. A rivalry like this deserves the spotlight of New Years Day. And the longer the league waits to make this game a reality, the worse it gets for the Penguins. This is probably the best year the Penguins will have in the next decade and they’re still not even doing that great. Meanwhile, the Flyers have about 5 A+ prospects stockpiled right now and nothing would be sweeter than watching all of them have a coming out party against Pittsburgh on one of hockey’s biggest stages of the year.

Flyers vs Rangers today at 1, Flyers vs Caps tomorrow at 12. Gotta lotta hatred going on this weekend.