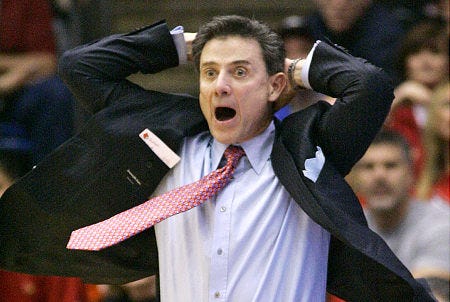 Alright, this has been an ongoing thing now and Louisville will put a self-imposed postseason ban on the men’s basketball team this year.

This is a blow for a team that is starting to look the part of a top-15 team. The real people I feel bad for though are Damion Lee and Trey Lewis – 2 senior transfers who had to deal with this shit and not reap any of the ‘benefits.’ Lee is making a case for All-ACC while leading Louisville to an 18-4 record so far.

I originally blogged about this back in October when the hooker story first broke. I still believe this is the end of Rick Pitino at Louisville. He handled this situation in the absolute worst way, besides letting it happen. When he refused to show up to ACC Media Day, it immediately became the talking point.

You’re the fucking head coach and a Hall of Fame head coach, how in the hell do you leave your guys – who were at Louisville for 6 months at the time – out there to dry? Despite the way he brought Louisville back to national prominence, there will be a movement by some people to remove Pitino as coach because of this and his 15 seconds with Karen Sypher.

Earlier this year when the story broke, Pitino was quoted saying if people didn’t want him to be in Louisville, he’ll be happy to pack his bags and head elsewhere. Remember those rumors of him being interested in the UNLV job? Well, maybe that’s not so crazy anymore.

This is a weird situation, but something we’re starting to see more of with these self-imposed bans. This is truly a dagger for Louisville though as the NCAA Tournament is expected to be wide open this year, giving them a legit shot at a deep run. Just stay away from hookers and use friends of the program instead.