What a world! Two of the most alluring sex lives in Hollywood, sitting on the same couch, playing “Never have I ever” with a lesbian. God bless 2016, people. God bless it. I wish this was an actual TV show, Rihanna and Clooney talk about their sex lives and all the nasty shit they’ve done. It would need to be roughly 15 seasons long, but it would be incredibly worth it. I mean look at the wonderful information that was bestowed upon us in just a few minutes.

Rihanna has sent nudes, she loves nudes, she thinks anyone who claims they don’t send nudes is a liar. Everything about Rihanna’s opinion is correct.

“Nudes, you say, RiRi? You have my attention.” 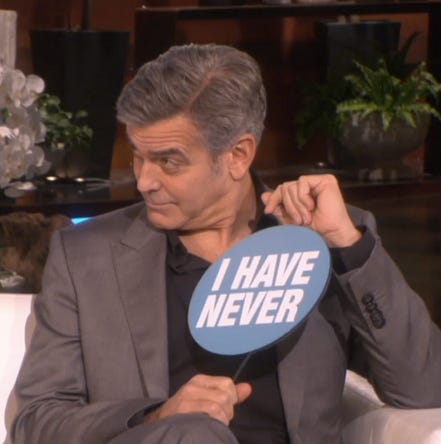 Has Clooney ever fucked someone roughly his own age? No, Ellen. Don’t be disgusting.

When Rihanna responded “what kind of cat” after being asked if she’s ever “spanked a cat” I almost passed out from excitement. I don’t know why, its probably because men have dumb brains, but girls admitting to/simply mentioning even the most benign sex stuff makes me go wild. Ooo girl you send nudes? You finger your pussy? You like to do sex? MAN YOU’RE A FREAK! That’s my reaction every time. My goodness she is sex.