Remember the above video from last week where a woman pulled over a cop for speeding and gave him a lecture? Well somehow the story has gotten even more nuts from there:

Miami Herald – The head of Miami’s police union — which doesn’t even represent the cop — [Sgt. Javier Ortiz] began blasting the woman on Twitter and Facebook. He called Claudia Castillo a “#COPHater.” He posted a picture of her drinking a beer while steering a boat.

He posted Castillo’s business card and told people to call her at work and on her cellphone. He told police to be “aware of this woman.” But it didn’t end there.

In the meantime so many angry people were calling her at work Wednesday that Castillo is afraid she might lose her job.

“They sent me home yesterday,” she said.

A local television station also dug up Castillo’s less than exemplary driving record. Sixteen tickets in the past 18 years. Five for speeding. Three for careless driving, one of them just two weeks ago.

“I’ve had my ups and downs,” she acknowledged in a telephone interview.

Castillo, a 43-year-old Kendall construction manager, describes herself as a single mother with a deadbeat ex-husband who put herself through college. She says she’s “not the jerk they’re painting me to be.”

She said Ortiz is just trying to divert attention from the real issue — police not following the law.

Documentary filmmaker Billy Corben (whom you may remember from ESPN’s “The U” and “Broke” 30 for 30s) also has some beef with Miami police for some reason and screencapped some of the shit the police union rep Ortiz has been putting out there: 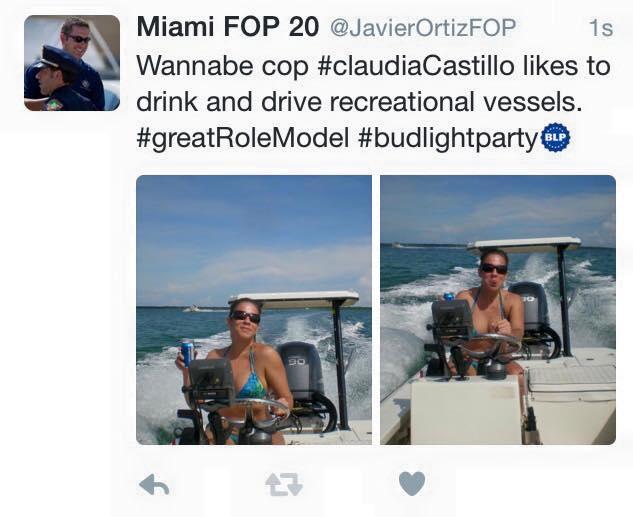 I said last time that this lady was pretty much the worst and seemed like one of these people who don’t matter much in her regular life so she needed to do something like this to make herself feel important. Obviously the facts here back all that up. Her job sucks, her life sucks, she’s always got her own driving problems and being a buttinski stopping a cop from going to work gave her some sense of purpose. She sucks despite her big Miami single mom titties, which pains me to say but it seems undebateable. But does she deserve being harassed or getting her spot blown for it because some cops get so thin skinned whenever anyone questions their authority?

The problem here is that I don’t know. Maybe to some people this is an equal and opposite reaction and this lady is obviously a HUGE hypocrite and I get that. But I think this sort of sums up my problem with the Internet overall. You have this lady who’s got nothing going in her life filming videos causing a problem and thinking she can “make a difference” (relative to whatever that means to her) then posting it online for attention while not thinking of how she’s fucking with a cop doing his job for no credible reason. Then some other equally rudderless human who happens to work for the police got offended by what she’s doing, then also has a huge public overreaction to look cool online, and then tries to ruin her life to “make a difference” with what’s important to him. Everything is always an extreme reaction one way or the other with the express purpose of ruining someone else’s life to make yours slightly better. It’s just a bummer how this is what the world is now, often hypocritical people trying to fuck with other people in public ways online to fill a bottomless void in their soul. 2016, what a delight.