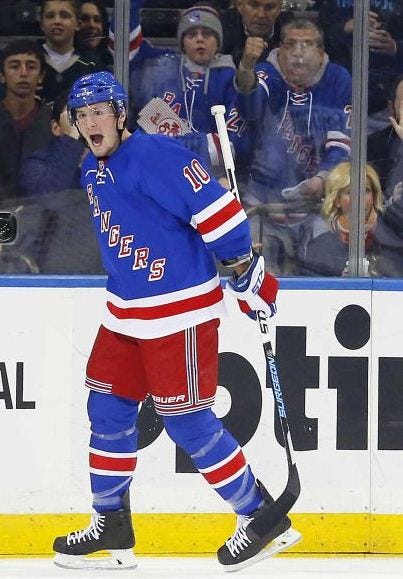 I guess I shouldn’t be surprised to see the Blueshirts follow up Tuesday’s loss in Jersey with a W at home. They’ve been alternating wins & losses since Christmas. Still, after Marc Staal gave the Wild an early 2-0 lead thanks to a turnover & a penalty, the Rangers responded in a big way. They treated Minnesota like the free-falling team they are in the second period & absolutely dominated to knot the score. The third period was a little more even but the Wild couldn’t sustain any pressure as the JT/Brass connection got together again for the game-winner.
What else can be said about Miller? Millsey has buried a third of the Rangers 24 goals over their last 8 games & dished to Brassard on the doorstep to take the lead for good last night. No Blueshirt has run this hot since Zucc went bananas between Halloween & Thanksgiving. Difference is, Miller’s keeping this team afloat right now. The kid is still only 22 even though it seems like he’s been yo-yo’d between NY & Hartford forever. With a lot of other young pieces struggling, JT’s making his mark at the perfect time.
Even more good news came prior to puck drop with Kevin Klein, just ruled out indefinitely with a broken thumb, taking snipes at practice. Skated again in full today & says he can play tomorrow. We’ll see. At the other end of the spectrum, Rick Nash’s bone-bruised leg has turned out to be a lot worse than it seemed as he still hasn’t played since prior to the break. Skipped practice again today but I gotta assume it won’t be much longer for him.
The Rangers have a matinee in Philly Saturday before playing 4 of their next 5 at home where they’re among the league’s best with a 19-5-2 record. They haven’t had a scheduling stretch under their own roof like this in months. Teams like the Kings & Blackhawks aren’t squads I’d choose to host, but with all their success at MSG maybe THIS is finally the time NY piles up some W’s & proves they’re not dead yet.