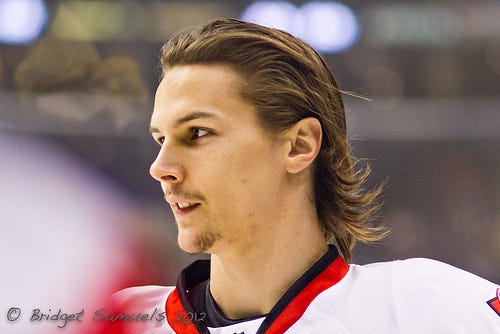 The world lost a great head of hockey hair this year when Erik Karlsson decided to cut off his luscious locks. Now it appears to be working for him as he is 4th in the NHL in points so far this year with 53, but it was a tragedy for hockey fans everywhere. Lucky for us, however, there have been more than enough players who have stepped in to fill this void. Now last week we handed out the 2015-16 mid-season awards, and today it’s time to show the hair guys in the league the respect they deserve.

(Quick Sidenote: As I started going through all the guys in the NHL with phenomenal hair, I started to realize that the Swedes absolutely DOMINATE this category. I should probably throw together a separate top 10 just for Sweden. They are a beautiful people) 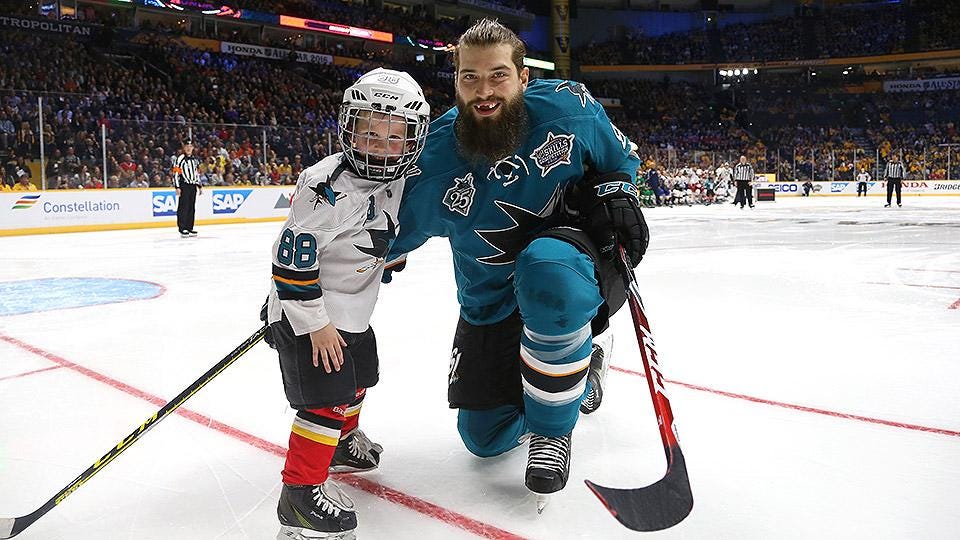 I’ve been tossing and turning over this selection for a while now. Have legitimately lost sleep over whether or not to throw Brent Burns into the All-Hair Team. Because I don’t know if Brent Burns has great hair or just a lot of hair. There’s a strong distinction between the two of them. But then I realized that when you look like Brent Burns, you can really only be one of three things. Either a bum, a lumberjack, or a hockey player. So because he has that look, he makes the cut. But to be clear, I like Brent Burns much better like this. Not that there’s much difference. 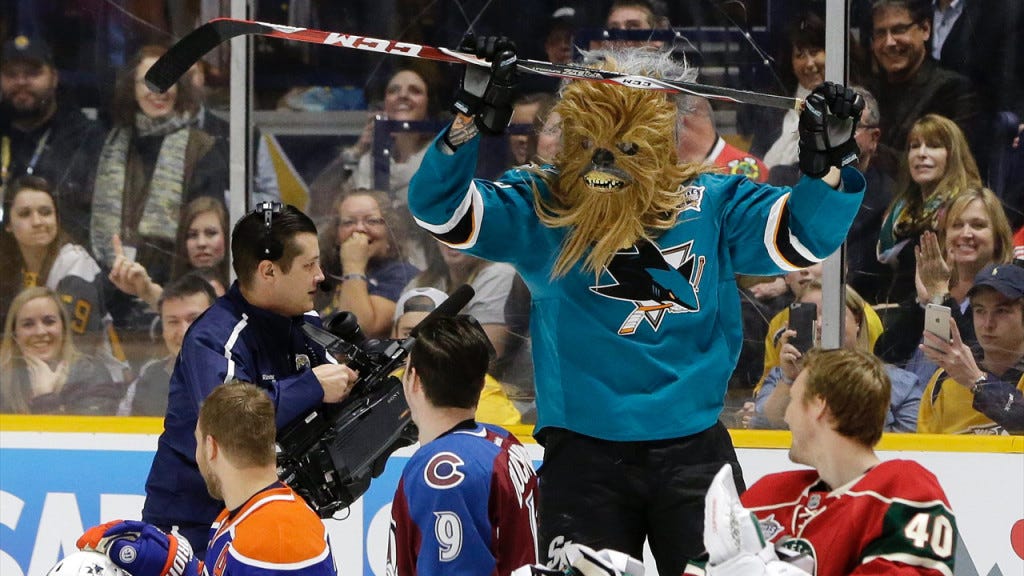 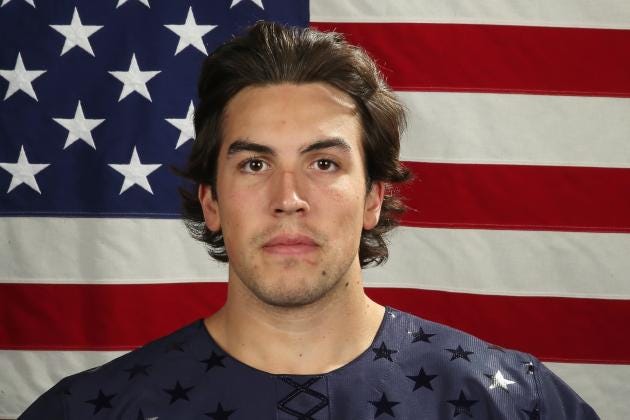 Justin Faulk is a very under-appreciated defenseman and a very under-appreciated hair guy. He had a few growing pains early in his career where he had too much of the side wings thing going on, but he’s developed into a better looking Drew Doughty if that makes any sense. They’re essentially the same player it’s just that Doughty has the advantage when it comes to skill and Faulk has the advantage when it comes to looks. But they average out to be about the same. Give or take. 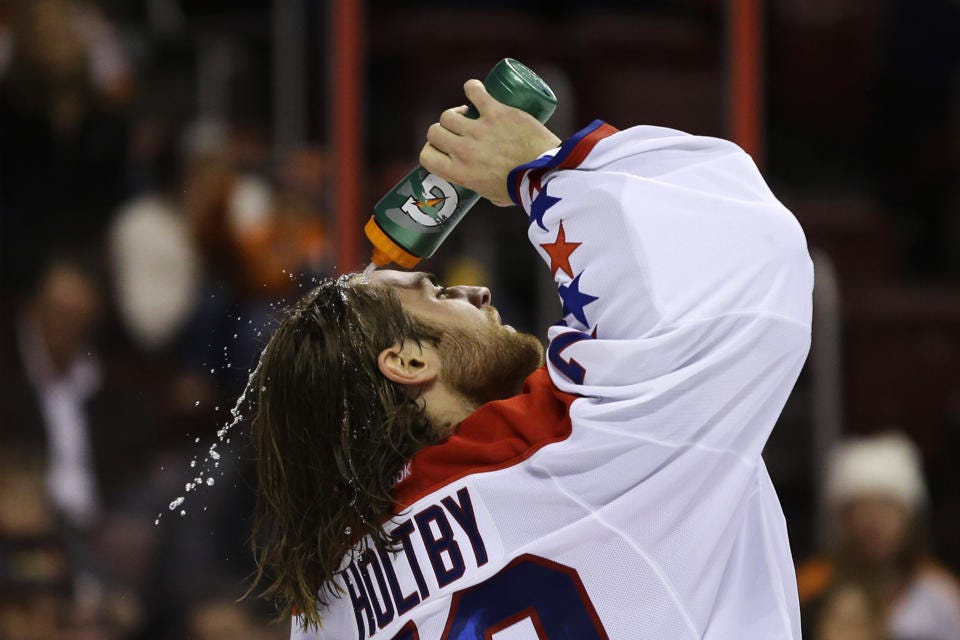 My hatred for the Washington Capitals has been well documented on this website for a while now. With that being said, however, I can’t say that I hate whenever Braden Holtby takes off his mask in the middle of games to hose down that lettuce with the water bottle. It’s a flowing and cascading head of hair. I can respect that and I can respect the numbers that he’s putting up this year. I just can’t respect a team who throws the C on a Russian’s jersey. 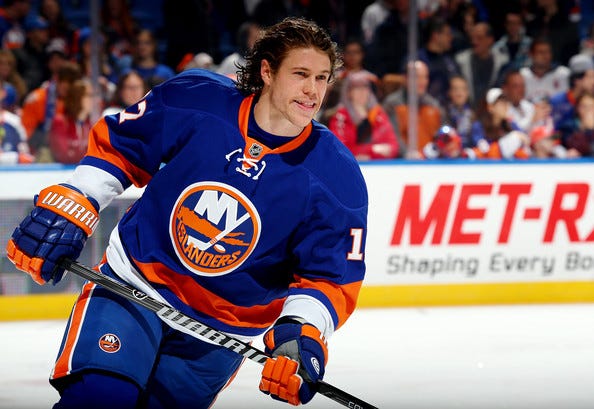 Matt Martin is Tim Riggins. That’s about all you need to know. Chicks love Tim Riggins more than anything else in the world and that probably explains how Matty Marts has landed himself Sydney Esiason. 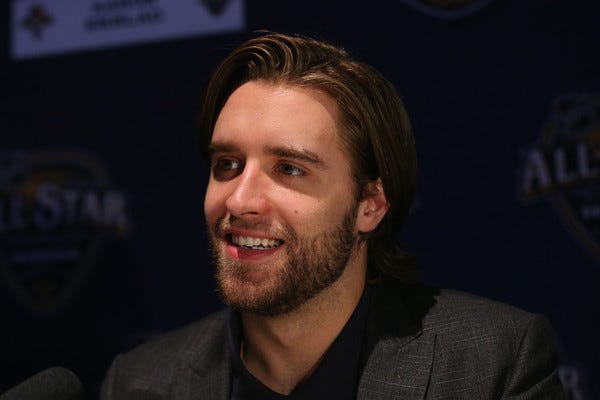 You see this man right here? Here’s a little fun fact about this man. He’s still a teenager for 3 more days. Aaron Ekblad is the definition of a man child. Kid is 19-years-old looking like he’s going on 30. He’s technically not old enough to drink alcohol in the United States right now and he looks like a dad. I’d like to see a little more wave to his hair if he ever wants to move up this list, but for right now it’s working just fine. 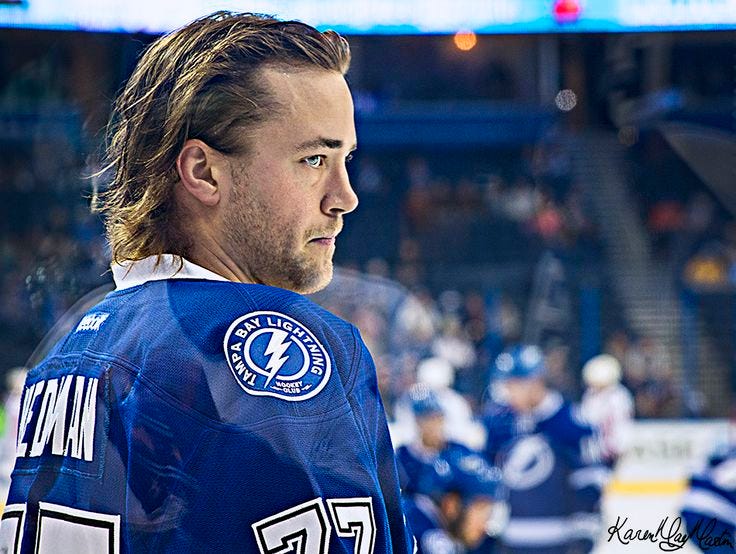 Victor Hedman is finally coming into his own as a Norris Trophy candidate type of defenseman . It’s no coincidence that he’s also become one of the best hair guys in the league as he’s been trending as one of the better defensemen. Speaking of which, a LOT of D guys on the list this year. Not exactly sure what that says for the 2015-16 forwards but they have to step their shit up. Either way, Victor Hedman has a caveman look to him and it works. 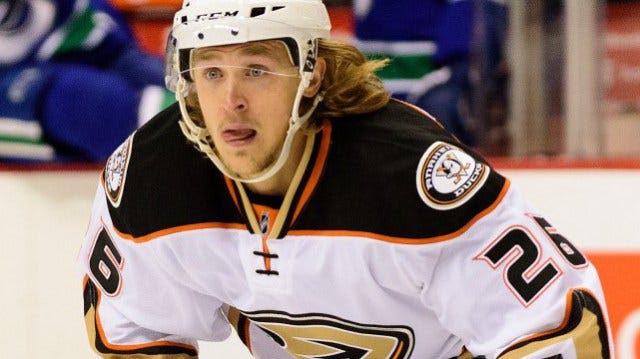 I can’t really say anything nice about Carl Hagelin anymore now that he’s a member of the Pittsburgh Penguins. Contractually, I’m forced to hate his stupid guts now. But with that being said, he’s been one of the best hair guys in the league for a few years now and the way it just flows behind him as he bolts down the ice is a thing of beauty. The hair, the visor tilt, the speed, it all comes together like a work of art. 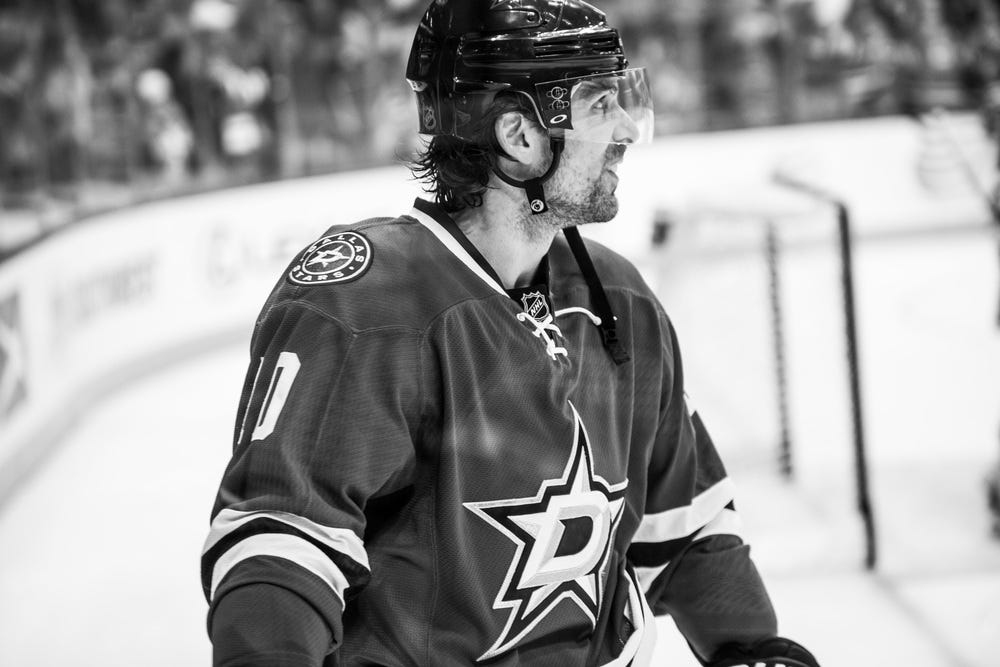 Patrick Sharp is the first guy on this list who is a repeat from last year’s. You know how difficult it is to repeat as Stanley Cup Champions in this league? Well it’s equally difficult to repeat as an All-Hair Team selection. There are a lot of young guns in the league right now who are letting their lettuce rage and that’s all well and good. But Patrick Sharp has a distinguished look to his flow. It screams “GQ”. He looks like a dad who could bang any babysitter he wants to. 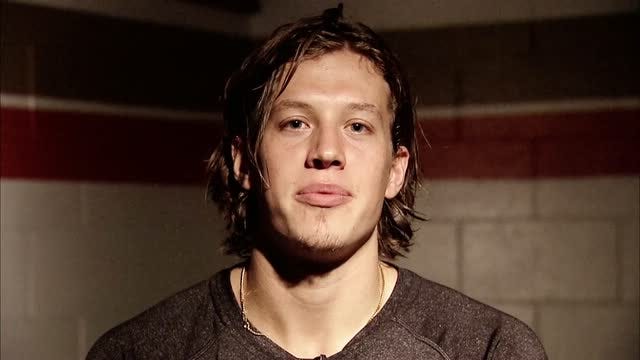 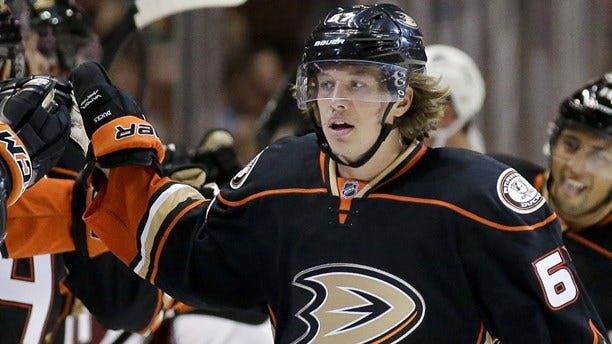 I’m assuming that Rickard Rakell is the biggest dark horse in this lineup. Mainly because he’s not a household name. But this is when I realized that Sweden just pipelines great hair guys into the NHL. You think you’ve seen them all and then all of a sudden Rickard Rakell comes onto the scene and just takes over. Look at the way it comes out of the helmet. Feathered and lethal. 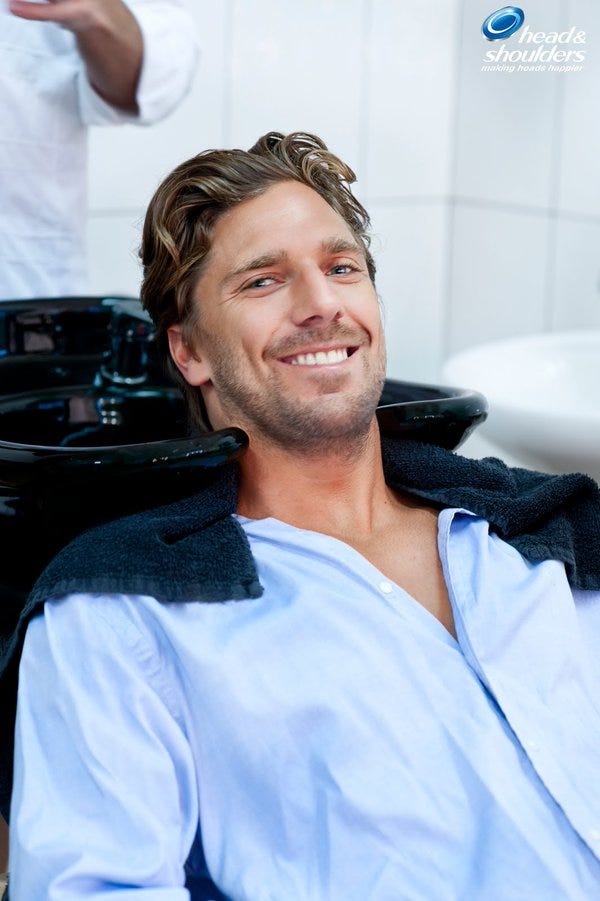 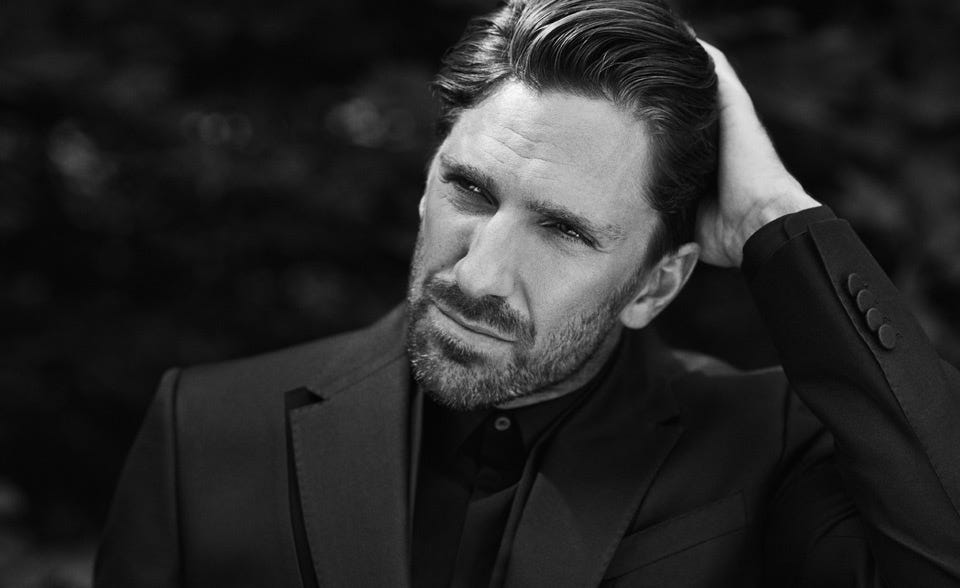 I mean, c’mon. How are regular guys supposed to compete with this? He’s the most handsome man in the NHL and one of the best in the world. Flawless is the only word I can use here to describe him. It’s criminal that he plays goalie and has to cover up this head of hair on the daily. 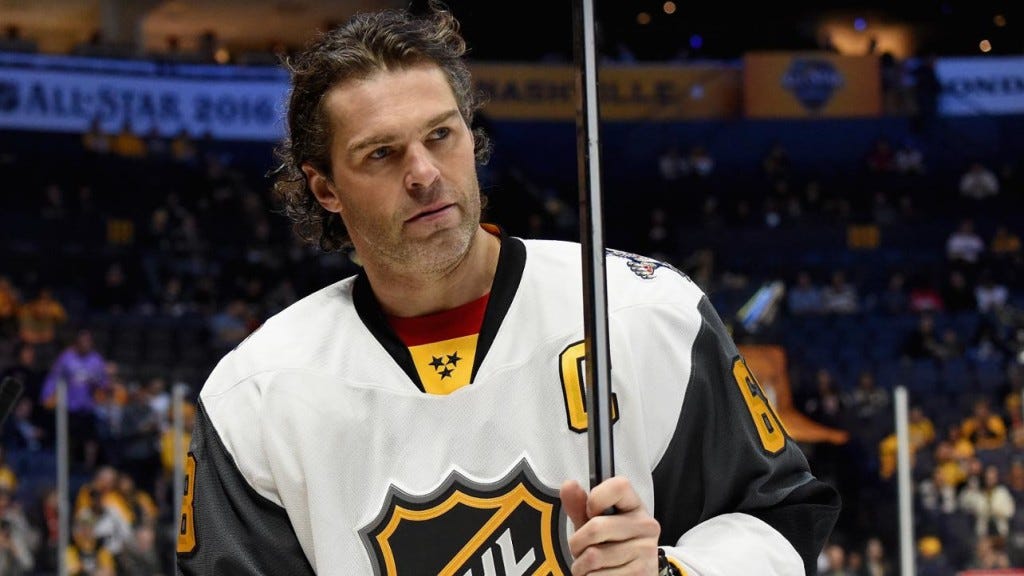 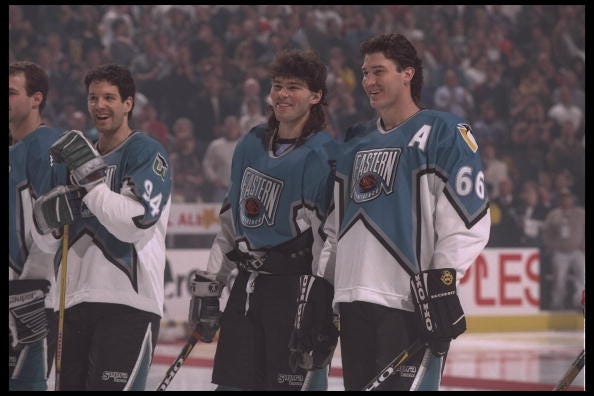 I can’t even begin to explain how blessed we’ve been to be able to have Jags in our life for this long. What a legend. Here’s to hoping he plays forever.

As far as the worst heads of hair in hockey go… Ryan Getzlaf, Patrick Kane (without a helmet or a hat on), Dustin Byfuglien and Dougie Hamilton. Just all really really gross heads of hair.