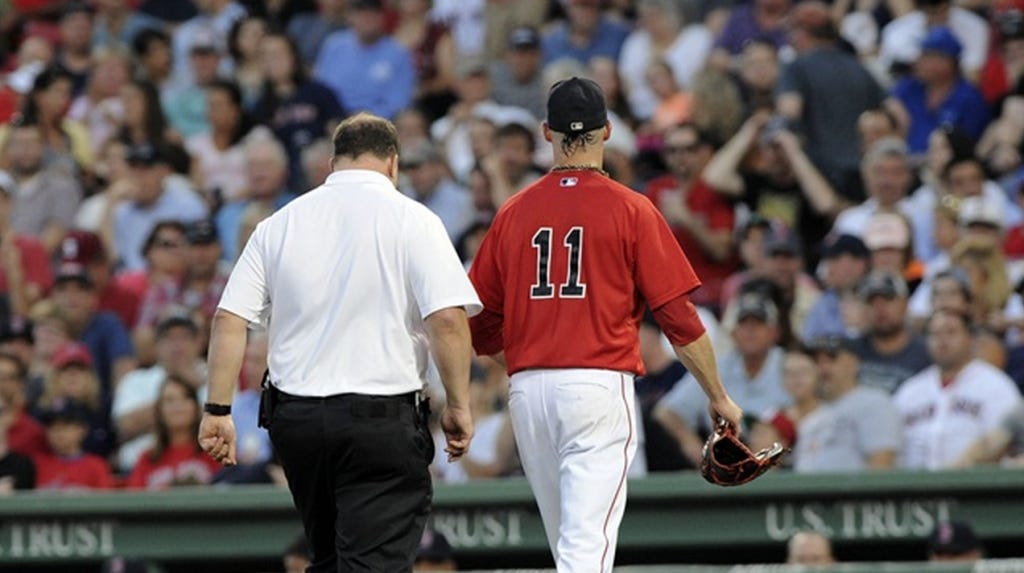 How’s that saying go again? The definition of insanity is doing the same thing over and over again, and expecting different results? Some shit like that? That’s Clay Buchholz and the people who annually believe that this is going to be the year he puts it all together.

This is Buchholz’s tenth year with the Red Sox, and he has yet to amass 200 innings in a single season. But this is going to be the year! Buchholz spoke with WEEI.com‘s Rob Bradford in Fort Myers today, and revealed his plan to reach 200 innings for the first time in his career in 2016.

“In my mind I was thinking I was trying it a little bit different this year,” Buchholz explained. “Instead of ramping up and throwing bullpens in the offseason I’m going to get to camp around the first or second. I knew Porcello was going to be here, and I knew a couple of catchers were going to be here, too. Given our reporting date is the 18th for pitchers and catchers I can throw the same amount of bullpens being here rather than being in Texas and not being around any of the guys. I felt like this route was going to work well for me this year.”

So, Buchholz’s plan is to skip throwing bullpens during the offseason, and start throwing his bullpens when he gets to spring training in the first week of February? Wow! That’s a great idea, Clay! But I feel like I’ve heard that idea somewhere before, though. Oh, wait. That was you during spring training in 2014.

“Usually coming into camp I’ve thrown four or five bullpens and am ready to go,” Buchholz said. “This year I didn’t throw any bullpens. So this year I’m using spring training for the purpose of spring training, that’s to get ready for the season.”

For those keeping score at home, Buchholz landed on the disabled list by May 28, had a 7.02 ERA leading up to that DL stint, and finished the year with a 5.34 ERA in 170.1 innings. To his credit, though, Buchholz is one of a few early arrivals to Red Sox camp, several days before their February 18 reporting date. Among the other early arrivals are Rick Porcello, Matt Barnes, Brandon Workman, Yoan Moncada, Jackie Bradley Jr., and Christian Vazquez.

Now, before you jump down my throat, this is not an attack on Buchholz’s character, nor his natural talent or ability. When he’s healthy — and this is not an exaggeration — he’s one of the best pitchers in the game. Flat out, right up there with the best in the league. The only problem is that he’s never healthy. I laid it all out in full detail back in November when the Red Sox picked up his club option for 2016. If it’s not the elbow, it’s the knee. If it’s not the knee, it’s the shoulder. If it’s not the shoulder, it’s his back. If it’s not his back, it’s his hamstring. If it’s not his hamstring, it’s fucking esophagitis or his god damn fingernail. Buchholz has missed 332 games over seven trips to the disabled list throughout his Red Sox career. It’s insane.

Trust me, I’d love to be optimistic about this guy, because he’s so good when he’s on, but I fell for it again last year. Going into the 2015 season, I felt good about Buchholz. I really did. I was even reluctant to deal him when he was pitching so well heading into July, because I believed he’d hold up and get the Red Sox back into it. Then, when the Yankees came to town in the second week of July, and the Red Sox had the chance to get within 2.5 games of first place with a three-game sweep, Buchholz got injured. Again. And he went on the disabled list. Again. And he was out for the rest of the season. Again.

Fool me once, shame on you. Fool me eight fucking times, then I should probably find a new career path.