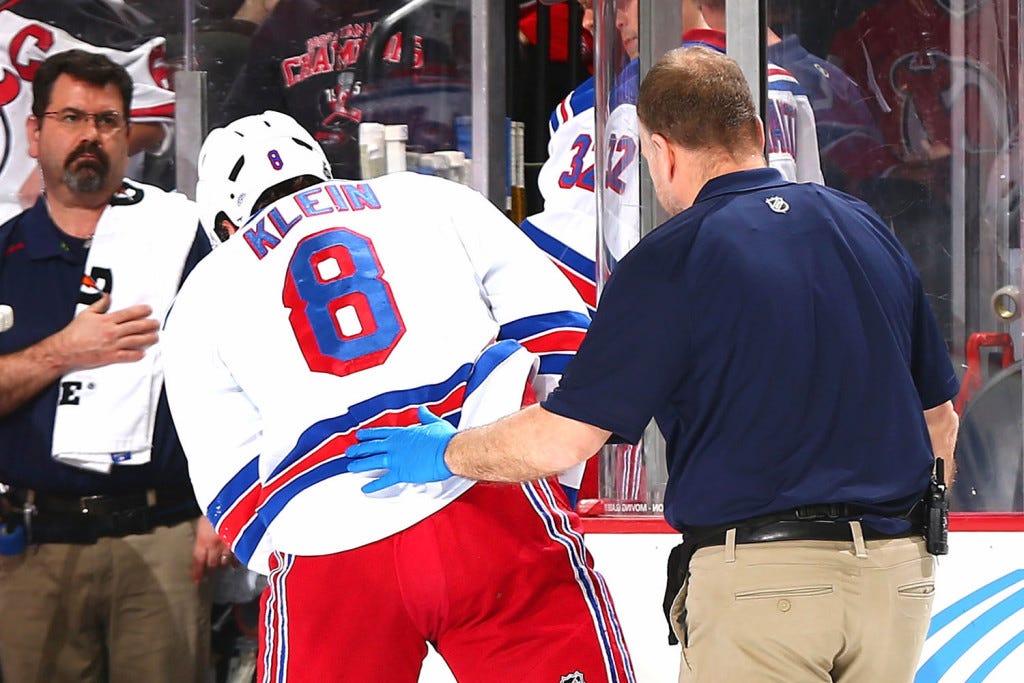 I knew it. I knew late in the third when Kevin Klein went down awkwardly that it was bad news. Finding a way to lose a game the Rangers once again owned most of the 5×5 play was frustrating enough to watch. Knowing the Blueshirts will be without arguably their best blue liner for the foreseeable future is downright devastating.
First, I don’t think there was anything dirty about the hit. Klein tried to turn up the boards & let Boucher blow past him. Instead, Boucher did the right thing and played the boards to take away Klein’s forehand. Some are reporting it as a slash, but all Boucher did before taking the body was try to lift under his stick. Maybe he got some glove, but I don’t see how that hit his thumb let alone broke it. Klein braced himself for an awkward collision into the boards & looked to jam his thumb against the base of the wall. That’s when he immediately threw his glove off in pain.

Regardless of the how, this is a huge blow to the Rangers. I wrote yesterday how AV needed to give his top two defenders (McDonagh & Klein) more minutes considering the diminishing play of Girardi & Staal. Obviously this isn’t possible now. Sure, it gets Dylan McIlrath in the lineup nightly but it wasn’t supposed to be at the expense of #8. That’s a big 20 minutes to eat and I don’t see AV giving all of them to the rookie – which means Dan Girardi is all but certain to be back in the 20 minute range after seeing under 18 last night. That means more guys like Joe Blandisi can blow by the right side of the defense. Sure, Hank should’ve stopped the short-side shot – but the point of defending is to prevent your goalie from being tested. I can’t imagine a more slow-footed, bad-angled approach by an NHL defenseman to a left-hander taking a straight line down the boards.
This also makes trading Keith Yandle equal to throwing in the towel on this season. Like I wrote yesterday, if the Rangers are going to continue to play him under 20 minutes in exclusively offensive situations EXCEPT on the top power play unit then take whatever you can get for him at the deadline. Now, Vigneault’s hand should be forced into allowing Yandle more responsibility across the board. He’s the deadline rental they need more than anything else (unless they can somehow pull off a deal for Shattenkirk). Also, AV’s plan to keep 39 year-old Dan Boyle fresh is out the window.
A quick Google search showed a broken thumb for B’s defenseman Adam McQuaid keeping him out 6-8 weeks last year. If Klein’s is a similar timeline, it’s safe to estimate he’s gonna miss the next 20 games. The Rangers worst stretch of the season happened to coincide with his earlier injury that cost him 11 December games (NY was 3-6-2 without him). There’s plenty of bigger names up & down the roster, but besides Lundqvist I can’t imagine a worse guy for the Blueshirts to lose than Kevin Klein.