Still love Steve Addazio.  Not sure if he’s a good coach anymore, but I don’t even care.   Anybody who can combine running off on the plug and being a dude is okay in my book.

PS – I obviously didn’t go to the Signing of the Stars at Michigan.   They invited me, but then told me I couldn’t tape anything.  I think they were just gonna seat me in the back row and let me watch it like a civilian.   Apparently Jeter and the Players Tribune had exclusive video rights.   Hey Jim why don’t you take out a white glove and slap me in the face with it.  Can’t catch a break this week this week.  But I guess I can’t complain too much because Michigan is pretty much guaranteed to win the National Title within 2 years with what Harbaugh is doing right now.   This Signing of the Stars thing is pure genius.  Every recruit in the country is gonna get in a fist fight to be part of this program. It makes the NFL Draft look like amateur hour.

PS – Originally I was told I would get to announce a player.  Then they ran out of room.  Hey I get it.  A list celebs only.   Can’t get mad a that. 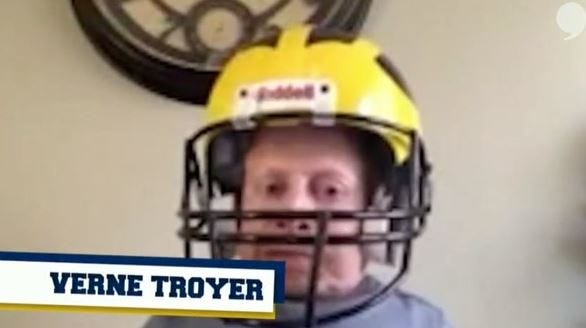