With the Super Bowl only a few days away, we are full into silly season for NFL rumors. Are you already projecting a New York Jets quarterback depth chart of Colin Kaepernick, Johnny Manziel and Bryce Petty? Are you stressing out about Calvin Johnson “retiring” just so he could end up in New England (okay, I am too) but then hoping Matthew Stafford gets traded to the Jets? Relax. Slow your roll and let’s look at what a realistic Jets off-season could look like and throw in a Super Bowl 50 prediction for good measure… 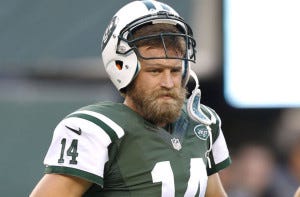 Quarterback – The Jets re-sign Ryan Fitzpatrick to a 2 or 3 year deal that averages between 7-10 million dollars per year, with limited guaranteed money after the first year. They wrap it up before the league year opens. If a quarterback they like (Carson Wentz?) drops near #20, they consider him but more than likely run back a similar quarterback depth chart to what they had last season.

The Rest Of The Offense – Chris Ivory walks. Bilal Powell comes back. They prioritize finding a back in free agency to pair with Powell (Lamar Miller?) and/or look to the middle rounds of the NFL Draft for another complimentary piece.

Their primary focus in the off-seaosn is on improving the offensive line, where they make two or three additions and likely move on from starting right tackle Breno Giacomini, while restructuring D’Brickashaw Ferguson’s contract.

Mo Wilkerson – Gets the franchise tag and ends up playing here in 2016 unless a team blows away the Jets with an offer. Nose tackle Damon Harrison leaves in free agency and the Jets look to the NFL Draft to find a replacement two down run stuffer.

The Rest Of The Defense – Antonio Cromartie gets cut. Marcus Williams gets promoted. The Jets work on adding speed to the linebacker position with one to two new additions through free agency and the NFL Draft. Demario Davis leaves. Erin Henderson returns on a short term deal.

Special Teams – The Jets sign a new punter and add a returner either through free agency or the NFL Draft with Kerley and Cromartie both gone. Nick Folk comes back healthy as the kicker.

NFL Draft – Offensive line and edge rusher will be the most popular choices you see paired with them in mock drafts, you may also see Jaylon Smith, Ezekiel Elliot or one of the quarterbacks (Wentz, Lynch, Goff…although it is unlikely they fall that far but we have a long way to go).

So, in a perfect world the Jets off-season looks something like: drafting Noah Spence and then adding a defensive tackle and running back in later rounds. In free agency, signing Andre Smith or Mitchell Schwartz, Lamar Miller and Travis Benjamin. Maybe they take a flier on a player like Daryl Washington or Ryan Clady and sign a punter like Marquette King or Jon Ryan.

Carolina – 27 Denver – 16: This plays out as a close, low scoring game until the final minutes when Peyton Manning throws a pick six that seals a Panthers win and gives them the cover. Cam Newton is your MVP but has a more impressive game running than throwing.